102 years ago, when the so-called “Spanish Flu” arrived in South Africa, there was no national health department, and no official guidance on what to do. By mid-October the death rate was so high that town councils decided to close cinemas and schools. Some schools, such as Benoni Central School, Vogelfontein school in Boksburg, and the Springs government school were converted into emergency hospitals to treat the overflow of patients who could not be accommodated in official hospitals. Between 1st October and 23rd November 1918, more than 306 Boksburg residents died either directly from the flu or from pneumonia that developed as a complication of the flu.

Spanish Flu caused similar devastation all over South Africa. At the height of the epidemic in October 1918, gravediggers in Cape Town could not dig graves fast enough. When the supply of coffins in Cape Town ran out, carpenters at the Railway Workshops in Salt River were called on to make emergency coffins from raw, unseasoned wood. Each day a special funeral train left Cape Town station for Maitland cemetery, loaded with the bodies of flu victims and mourners from friends and family.

Just as is the case with Covid-19, nurses, doctors and volunteers who cared for the sick in 1918 had a high chance of themselves falling victim to the virus. This is the story of some of the health care workers who succumbed to “Spanish Flu”.

Dr. Howard Charles Spaulding came from the small Illinois coal mining town of Virden in the United States. He immigrated to South Africa before the Anglo-Boer War and offered his services as doctor to the Zuid-Afrikaansche Republiek government. In January 1904 he married Annie Rhind Stuart from Scotland in the Presbyterian church in Germiston. Three of Annie’s brothers had also settled in Germiston. Her older brother Alexander, who was a builder, had married Petronella Wilhelmina, the widow of Boer general Gerhardus Gravett in 1902. Gerhardus Gravett, the grandson of an 1820 settler, had died of wounds at Roossenekal in 1900. Annie’s brother John Stuart became a Germiston Town Councilor and her brother Robert worked together with Alexander Stuart, building chiefly for the mines and for the Victoria Falls Power Company.

Howard and Annie Spaulding had five daughters and one young son by 1918. Dr. Spaulding was very popular with both English- and Afrikaans-speakers on the East Rand. In October Dr. Spaulding was working at the government hospital in Germiston, when he contracted the Spanish Flu and died at the hospital on 14th October, aged 50. Two days after Dr. Spaulding died, his nephew Alec Stuart (who was a baker) also passed away from the flu. Annie Spaulding’s sister-in-law Petronella Stuart had suffered her own tragedy 3 years earlier, in 1915, when her second husband Alexander died when the “Lusitania” was sunk by a German u-boat off Cork in Ireland.  Petronella Stuart had the dubious distinction of becoming a war widow twice.

Painting of the Lusitania - Bundesarchiv via Wikipedia.jpg 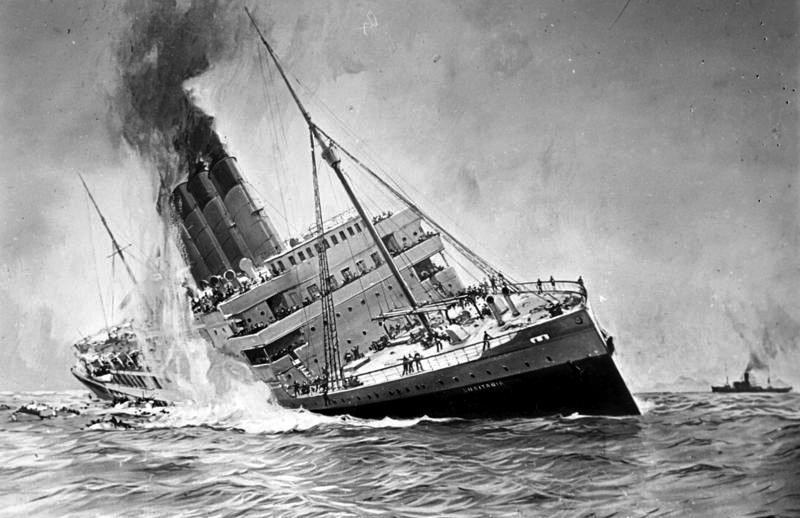 Painting of the Lusitania (Bundesarchiv via Wikipedia)

After the death of her husband, Annie Spaulding later got married for a second time, to George Mathers, an electrical engineer, and had another daughter. As five of Annie and Howard Spaulding’s children were girls, the Spaulding name has not survived in South Africa.

Jane Goldwyer was a nurse working at Boksburg hospital and living in Boksburg North. She had five children – her youngest son, Robert, was only one year old when Jane contracted Spanish Flu early in October 1918. Jane was admitted as a patient to the same hospital where she worked at, where she was attended by Dr. W. T. Russell. The flu, however, progressed to pneumonia, and Jane Goldwyer passed away on 19th October. Nurse Goldwyer was aged only 40 years. 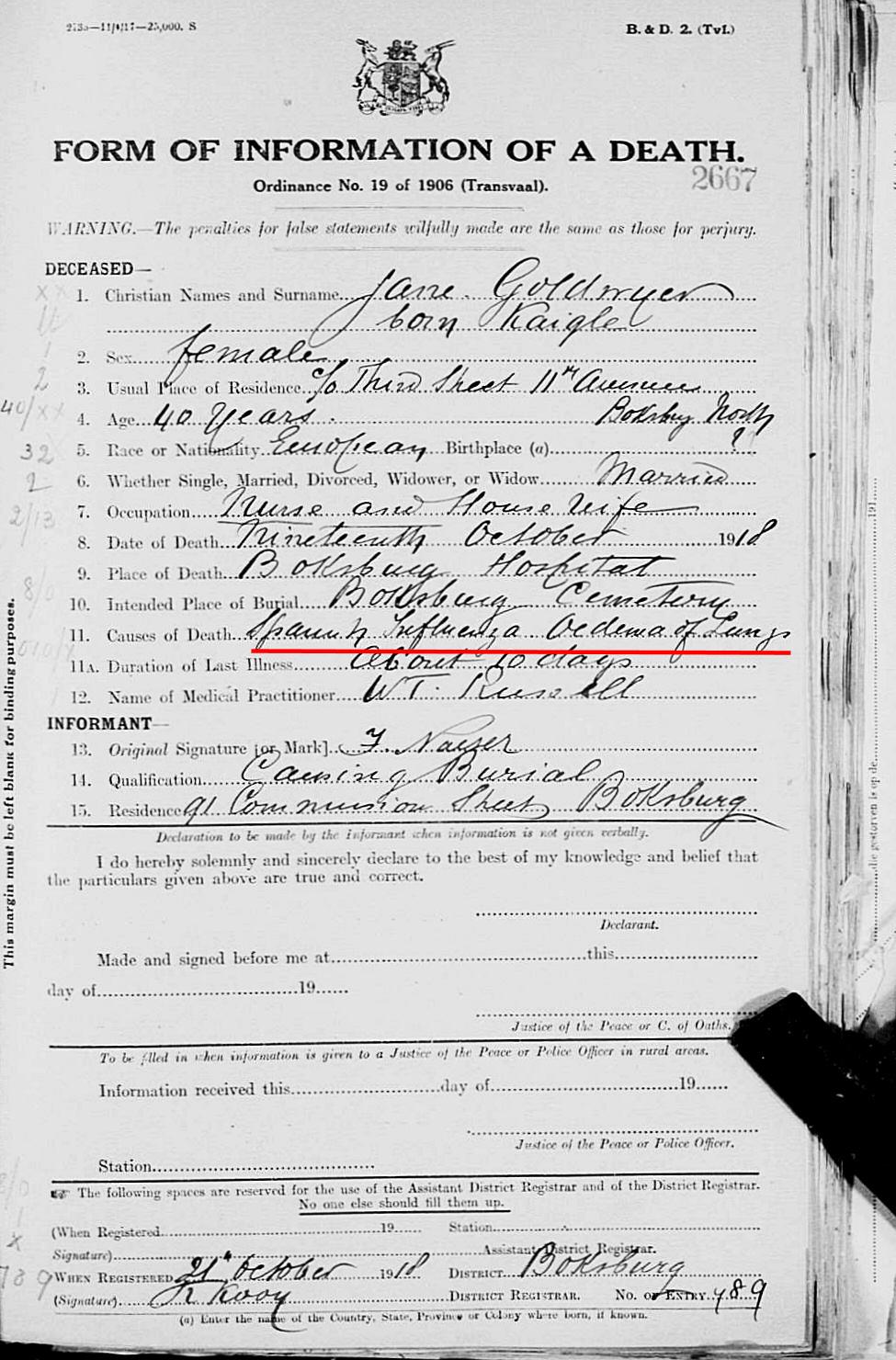 Doctor William Frederick Russell, who attended to Jane Goldwyer, was a graduate of Trinity College in Dublin. Born in Clashmore, Youghal county in Cork, Ireland, Dr. Russell married a British woman who was born in Fiji, Florence Ono Cheyne Wiseman, on St. Valentine’s day in 1917. Florence Ono Cheyne Russell was a certificated nurse. The couple had one daughter, Mary Cheyne Russell. In November 1918 Dr. Russell was the Superintendent of the Boksburg Hospital (now the Tambo Memorial Hospital) when he himself contracted Spanish Flu. Despite the best efforts of the hospital staff, Dr. Russell passed away on 12th November. Dr. Russell was only 35 years old, while his daughter was just eleven months old at the time.

A few weeks after the death of Dr. Russell, his house and furniture were put up for auction. His widow, nurse Florence Russell, never re-married and lived in straightened circumstances in Johannesburg. She died at the age of 49 at Rochester Mansions in Johannesburg in March, 1937.

Nurse May Barr of New Kleinfontein hospital in Benoni was another health care worker who succumbed to Spanish Flu.

Emily Stuart Ramsbottom was a daughter of Rev. John Brebner, who had been Superintendent of Education in the Orange Free State before the Anglo-Boer War. Emily was born in Somerset East and was married to Albert Robert Ramsbottom, who was postmaster in East London, when the Spanish Flu hit. Emily Ramsbottom was a qualified teacher, with no nursing experience, but she nevertheless volunteered to nurse some of the East London flu victims. Sadly Emily herself then contracted flu. She died at home at 16 St. Marks Road East London on 2nd November 1918. Emily and her husband had no children.

A memorial to Emily Ramsbottom is one of the few that are known to state that Spanish Influenza was the cause of death. The memorial for Emily also records that she “gave her life for others”. 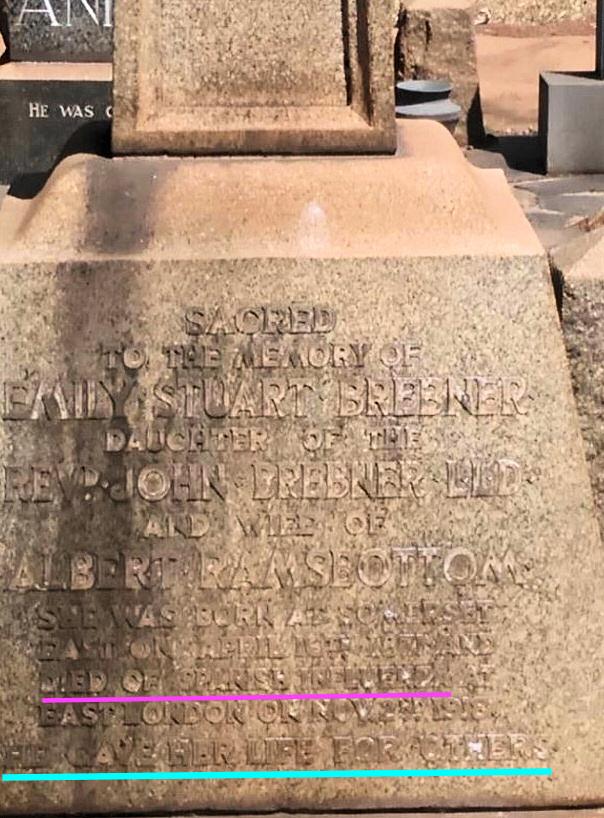 Perhaps the saddest health care victims of the Spanish Flu were the Stellenbosch-born Dr. Arthur James Milne and his wife. Dr. Milne qualified with a medical degree and a diploma in Public Health at Aberdeen university, and also earned a diploma in Tropical Medicine at the University of Liverpool. Dr. Milne was the son of William and Mary Milne of Kloof Road Cape Town.

In January 1914 Dr. Milne married nurse Frances Lane, who was born in East London and was at the time working at the Hillbrow Nursing Home in Johannesburg. Later both Dr. Milne and his wife moved to work at the Simmer and Jack mine hospital on the East Rand. Dr. Milne then volunteered to serve with the South African Forces. He was appointed a Captain in the S.A. Medical Corps and was sent to an outpost, Fort Johnston, at the south of what was then Lake Nyasa, while his wife continued to work as a nurse at the Simmer and Jack hospital. The troops at Fort Johnston were charged with keeping an eye open for Paul von Lettow-Vorbeck and his askaris, who were operating in Mozambique.

On 8th November 1918 nurse Frances Milne died of Spanish Flu at Simmer and Jack hospital. She was buried at Primrose cemetery in Germiston. Shortly after he heard by telegraph about his wife’s death, Dr. Milne himself contracted Spanish Flu, and passed away on 7th December in the Fort Johnston military hospital. He was 32 years old; the same age as his wife. As the whole Milne family was wiped out by the flu, it is perhaps fortunate that Doctor and nurse Milne left no children to grow up as orphans.

Dr. Milne was buried in the military cemetery at Fort Johnston  - today the town cemetery in Mangochi, Malawi.