The “loving gesture” has proved to be wholly destructive... 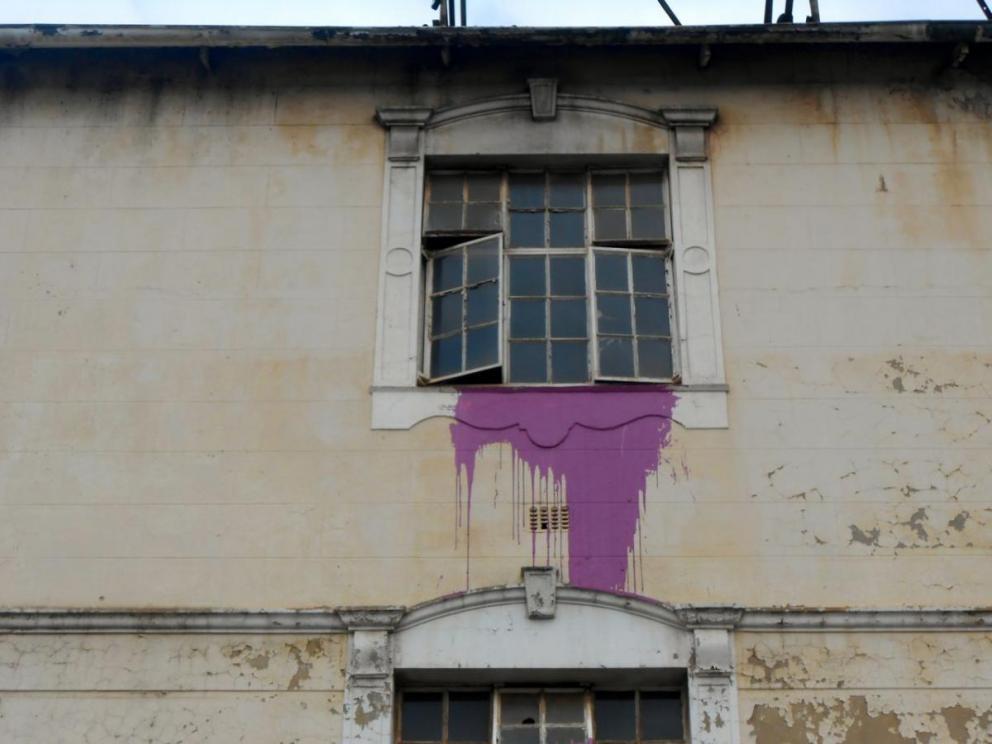 Below is the Egoli Heritage Foundation's response to the revised statement by Urban Joburg  (published 15 September 2014) on the 'Pink Buildings Controversy'. Those wishing to catch up on the saga can view previous letters and statements here.

We welcome the statement by Urban Joburg which they admit was “partly inspired” by the Egoli Heritage Foundation’s (EHF’s) critical comment on their earlier support for the abusive action of bewareofcolour when they painted a number of inner city buildings, bright pink.

Notwithstanding that the latest statement issued by Urban Joburg seems to soften their support of bewareofcolour they adhere to the view that the serious contravention of the National Heritage Resource Act (NHRA) which, on the face of it, is a criminal offence, should not be dismissed as idealistic or immature because it is alleged they “(we) do not believe there is a substantive engagement with the reasons behind the protest”.  In other words the reasons for idealistic and immature behaviour are expected to mitigate the nature of the offence.

Immature means to act in a way that is not sensible and is typical of people whose intellectual development is stunted, or in the process of developing.  Maturity is not measured in calendar years.

Idealism is the belief that a perfect life, situation, etc. can be achieved even when this is not very likely.

Accordingly, when the EHF called the demonstrators immature and idealistic, this was because, not knowing the identity of the perpetrators of the abuse, nor what they stood for, it chose to minimize the condemnation of their conduct.  The alternative was to call their conduct antisocial and outrageous, which it now seems would have been more appropriate.

Under the circumstances Urban Joburg should not have objected to what the EHF has described as “immaturity” and “idealistic” when bewareofcolour foolishly committed a prima facie criminal offence.

Urban Joburg has characterised, or should it be caricatured, those organisations (presumably the EHF, amongst them) that are dedicated to the conservation of architectural heritage and a respect for the history of the city.  They say bewareofcolour consider their action to be akin to an “exercise in caressing” and that those who defend the integrity of old buildings see it as “an act of defacing the buildings”.

With the two alternatives to choose from, Urban Joburg nail their colours to the wall by admitting (somewhat romantically or idealistically), that “our point of view tends to favour that of beweareofcolour”.

No reason for supporting the protestors is given except to say that there has been no “substantive engagement (presumably by the EHF) with what bewareofcolour stands for”.  This is not true:

When bewareofcolour’s provocative action was reported in the media, the EHF read the only document provided by the demonstrators which purported to explain their actions.  From the document it was learnt that the painting of a number of city buildings was:

On the basis of what was gleaned from the only document available to it, the EHF posted its critical response on the Heritage Portal (15th August 2014).

Since then a more detailed statement by bewareofcolour has been released but the EHF sees no reason to modify its opposition to what it believes was antisocial behaviour (at the very least) or criminal conduct on the part of the demonstrators.

Nor does it consider the apologia made by Urban Joburg on behalf of the demonstrators to be valid.

The lack of moral value attached to the appropriation of property and its concomitant abuse is beyond question, reprehensible, but it has been suggested, by Urban Joburg, that sometimes wrong doing is justified because the cause is righteous and leads ultimately to a more just solution.

This might have been true at the time when a non-democratic political dispensation existed, but in post- apartheid South Africa the rule of law must be supreme?

In the light of the above:

Two wrongs do not make it right.  Therefore the question is only of academic interest, but if it could be shown that the demonstration has had a positive result, then this could be a reason for reassessing the EHF opposition to what would still be an illegal action.  This is not the case and only doubtful results have accrued as a consequence of the “experiment”:

Urban Joburg seem to be blind to the moral issues implicit in bewareofcolour’s abuse of privately owned property, and despite the ethical dilemma that this must pose professionally, persist in their support of bewareofcolour. However they do obliquely defend any implication that they support “illegal and lawless activity” and launch into a defense of what they stand for namely:

It seems the professors condone the “occasional” breaking of the law and beweareofcolour seem to have provided such an occasion.

“The law like the built environment is forever present in the city and fulfils an important function…we respect this function and generally (not always it seems) advocate that the law be observed, we study not only the act of observing the law but also of breaking it, and wecontemplate the positive and negative consequences of both of them for the city”.

Note the use of the heavy type that has been added, and a bracketed insertion.

As academics it is appropriate that they study both the act of observing, and breaking the law and that they contemplate all aspects of the law – good and bad – but in lending support to demonstrators, who act outside the law, they are seen to go well beyond the act of study and contemplation and indeed what the layman perceives to be their duty as lawyers to uphold the law.

Study means the activity of learning, and contemplation is to look at something in a careful way for a long time.  Urban Joburg appear to rush into print.  Their initial statement was not “careful”.

Urban Joburg also, it seems “study” and “contemplate” other legal boundaries such as by-laws, which they dismiss because they are “boundaries of exclusivity and exclusion” that they believe to be “morally and constitutionally suspect”.

“Boundaries of exclusivity and exclusion” are high sounding words but what do they actually mean?  If it is intended to say that all by-laws are not equally moral or constitutional, the EHF agrees.  However some of them, notably health and fire by-laws, are intended to entrench basic human rights such as the right to fresh air, water and safety.

It is the constitutional right of people to have a roof over their heads, but not a roof that is likely to collapse and should we countenance their being burnt to death in a fire because they were merely provided with shelter?

The EHF would expect Urban Joburg, as lawyers, to work to change by-laws that do not meet the required moral or constitutional standard and not to advocate ignoring them or their abolition, without suggesting what should replace them.

As in their reluctance to accept the validity of by-laws, Urban Joburg would seem to have no respect for the National Heritage Resources Act (NHRA) and fail to acknowledge that it protects old structures from neglect.  If it was implemented as it was intended, old structures would not now lie abandoned and decayed.  They would have been demolished and replaced with new ones or been properly conserved for other purposes such as to house the homeless.  However, this requires that national, provincial and local government and Urban Joburg, wake up and recognise that there is a social dimension to the decay of the city.

Without the will to support social change and the financial resources to capacitate a drive to eradicate poverty, all the protesting will not help at all!

The EHF regards all buildings with respect because they are intrinsically valuable.  They represent a useful resource, but some of them (heritage buildings) are also extremely significant for their beauty, architectural and historic importance.  Notwithstanding its devotion to the cause of heritage conservation, the EHF realizes that neglected buildings, whether heritage or not, are significant evidence of social, economic and political decay.  It abhors this evidence. Therefore the issues of conservation and the provision of accommodation are inextricably tied together.

By contrast, bewareofcolour propagates a blinkered approach to the plight of the inner city, seeming to believe that the symptom, namely the decay, the empty buildings and the homeless can be cured merely by drawing attention to what anyone can see to be a problem.

The EHF praises bewareofcolour for its awareness of the problems, but condemns it for the remedy adopted.

The EHF is, however, surprised at Urban Joburg’s support of beweareofcolour.  Perhaps it should not be because Urban Joburg could also be idealists. Who, except idealists would think that protesting and defiling a building could provide a proper environment for the democratization of buildings to take place? For such a fragile flower to flourish, the ground would have to be well prepared.

In circumstances such as existed prior to and after the demonstration, the ground was poor.  Therefore the weed of anarchy is more likely to grow than was the possibility of the democratization of buildings in the city.

Democratization of buildings has been touched on by Jacques Stoltz who has commented on the latest Urban Joburg response as follows:

“This (decay) is precisely why our cities continue to entrench anti-democratic tendencies.  The fact that the heritage lobby insists that local communities have a say in how their communities change (through the provisions of the NHRA) is in itself an act of democratization.  The gimmicky painting of buildings does nothing to create a more democratic culture.”

“The EHF invites Urban Joburg to join them, not in preserving the old buildings of Johannesburg per se, but to use their expertise to force those who have powers entrusted to them by legislation, to use these to halt the anarchistic state that prevails at present. This would be useful and productive whereas protest, no matter how well-meaning, it may be, usually leads only to more protest, division and frustration.”

These words have fallen on deaf ears but the invitation remains open!