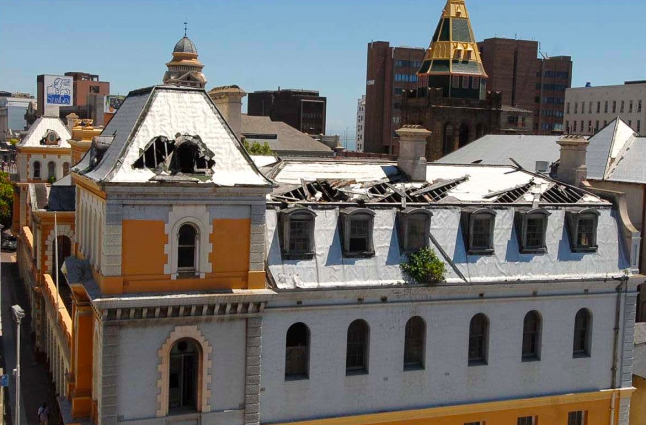 This building is today commonly referred to as the ‘(old) Post Office Complex’ but contains 4 conjoined buildings. The complex is situated on erf 3787 but officially referred to as erf 5645, which includes the parking lot at the bottom of Military Road (formerly the Parade ground). It lies directly behind the City Hall.

The Post Office/Courthouse/Police station were built by the Public Works Department and erected by J Kohler & Sons. The architect was H.S Greaves who completed the Parliament Buildings in Cape Town. The entire complex on erf 3787 was declared a National Monument on 26 October 1984 and is now a Grade 2 structure. The oldest part is the old Magistrate's Court (1885) onto which the Baakens Street Police Station (and Police barracks) was built (1899) in the same style as the courthouse (this faces onto the Feathermarket Hall). The Post Office (1897) facing Fleming Square with its “Rhineland” style tower, has on its corner the later telephone exchange (1919/1920).

Plans drawn up in 1897 show the original appearance of the Police station and Post office additions completed around 1902. The Court moved to the ‘new’ buildings in North End in 1934 and the post office took over the vacated part of the building (Consolidated erf from 1938). The central courtyard boasts some interesting later additions and a mix of various architectural styles. There is evidence that BJ Vorster was held in the below-ground cells of the Police station (amongst others) and there is still evidence of struggle-era graffiti.

When the new Post office was built in 1988, there was a proposal for CAPAB to take over the building and utilize it for the arts. This never transpired and the complex was sold by the Metro in 1990 to a Mr. Halgryn, who sold it to Mr. K. Denton in 2002 under Ummi Properties. After years of pressure, Denton repaired the exposed wooden skeleton of tower on the Post Office section in 2007, without approval from the PHRA permit committee. It is not known if the intricate guttering system within was retained.

The public has had virtually no access to the site, although an enforced inspection allowed architects to inspect a limited (less damaged) section. There has been very extensive water damage that has weakened brickwork and destroyed portions of the moulded plaster sections of the ballroom, and serious damage to the Baakens Street elevation.

With regards to more  recent  work done (from 2010), there are several sections which appear to have been demolished. I first witnessed demolition work taking place in July 2009 in the ‘cart lane’ between the Post Office and Courthouse. A top floor external wall was being knocked down into the Cart Lane with bricks being loaded into a skip, out of view.

Externally, the damage became visible with the repairs to the roof  in Feb/March 2010. The first brick chimney was demolished from the Courthouse and then the dormer air vents. The next chimney to be demolished was the Coega stone chimney between the Post Office and Magistrate’s Court. It was the last such example to remain from the original building. All the remaining brick chimneys from the Courthouse and Baakens Street Police station examples have now been removed. (Five visible from the Street level and at least three hidden from view).

The most severe damage inflicted on the building is on the Baakens Street Police station section, where an entire floor, gables and chimneys have been demolished since the end of 2010. The building has significant architectural, social and political importance, and has huge tourist value and potential, apart from the Victorian architectural value of the building.

Years of pressure has come to nought, and a section 34 charge was originally laid by members of the public in 2011. This after a new roof began to go up. Permission was given for "essential repairs" but the work progressed far beyond this. The case now sits with the public prosecutor (as at present, July 2016), who awaits information from the PHRA. The property owner in question, Kenneth James Denton, has, since 1998, owned a large portion of historic houses (many national monuments) and has allowed them to deteriorate for well over a decade. Other examples include the Donkin Street terrace houses, now completely and illegally altered beyond recognition. See also, Victoria House (c.1824), also owned by Denton, along with 2 Victorian Houses demolished outright.

Please use this thread to add background and updates