This book could have fooled me! It is a large format, folio sized book in paperback binding. It is all about the Anglo Boer War. It is meant to look like a newspaper. It is a scrap book of the weekly edition of a local newspaper called the "War Reporter." Each issue is two pages long and the series runs from 1899 to 1901. It looks like a compilation of republished and neatly bound newspaper front pages. The paper is coarse grained and one step up from newspaper print. It is a large paperback. Closer examination reveals this title to be a modern history of the Boer War but put together as short newspaper articles about what had happened around that particular issue date. The top banner, charmingly reads "In the veld, South African Republic". 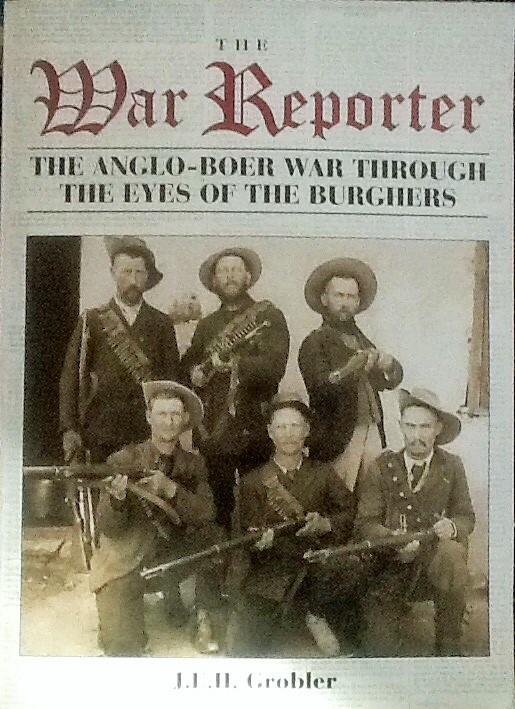 Each "issue" of this newspaper carried a series of six or seven current stories of the key items of war news for a particular week. There is an editorial commentary then the issue is illustrated with black and white contemporary photographs. News correspondents and photographers were evidently busy men on the spot getting round to battle fields and siege towns. The War Reporter takes you back a century ago to allow you to read the news of the week as civil war ravaged South Africa for over two years. Here are the eye witness accounts from the initial Boer Ultimatum to the British on 1st October 1899 to the signing of the Peace of Vereeniging in May 1902 and the bitter surrender that followed for many Boer commandos.

But all of this is an illusion. There never was a newspaper published in South Africa at the turn of the 20th Century called The War Reporter, written in either English or Afrikaans. This is an extraordinary clever device on the part of the author, J E H Grobler, who was a senior lecturer in History at the University of Pretoria. What Grobler has pulled off is a highly unorthodox history of the Anglo Boer War. His book is an imaginary newspaper and his objective was to use this method of verisimilitude to convey a mood and a zeitgeist of the war. His central question was: "How did the Boers experience the Anglo-Boer War?". He makes no bones about it being a one sided history from the perspective of the Afrikaners of the Transvaal and the Orange Free State who felt they had no other option but to take on the British.

To celebrate the centenary of the Anglo-Boer War, the Beeld newspaper published a series of 66 supplements in Afrikaans called Oorlog-Beeld. A few years later this became a project for Jonathan Ball publishers with the author now translating all of his many "newspaper articles" for an English readership. The challenge was consciously to put the reader in the situation and location of the Boer men and women in the time of travail. It is an enormous leap of imagination to put yourself in the shoes of the Boer sharp shooting soldier with his Martini Henry Rifle, his bandolier, his biltong and his horse. The author admits he is totally biased and on the side of the "bitter-enders", despite the fact that Boer opinion was fragmented and changed as the war progressed.

The War Reporter - back cover.jpg 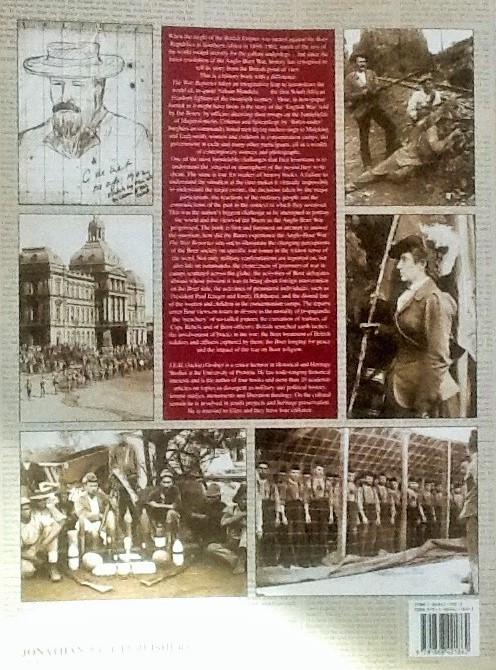 Grobler comments: "I believe that it is impossible to fully comprehend a phenomenon such as a major war in the history of a people if one fails to understand the ways in which the participants - who did not have the luxury of hindsight - experienced the events that they were involved in." Wise words indeed, ones that apply equally to the world of the small Boer republics battling to retain their independence as to the children and parents of Soweto struggling against oppressors. The tragedy of South Africa is that language, culture, and race have divided us and produced competing nationalism forged through war and struggle.

This is an excellent book to convey the sense of place and period and to address the human tragedy of war as it unfolded. There is a succinctly written account for example of the Siege of Mafeking (11 November 1899). Grobler imagines what it was like to be part of the Boer besieging force and mentions that 600 black townspeople were being forced by the British to fight against the Boers. I wondered here whether Grobler picked up on the later historiographical interest in the role of the blacks in the Boer War, which at the time was seen as a particularly barbaric white man's war. In retrospect we know the Boer war as a disaster for all of South Africa with a massive price paid by all.

It was the first war to be keenly reported on by war correspondents but more effectively so from the side of the British. Winston Churchill was after all a war correspondent when he was captured near Ladysmith. Edgar Wallace was another and his dispatches were put into a book of " Unofficial dispatches". Leo Amery's Times History of the War in South Africa, 1899 to 1902 became a standard reference work. The republican newspapers of the time drawn on by Grobler were De Volkstem and the Transvaal Government Gazette.

I think Grobler's method both fascinates but also raises some concerns. The fascination lies in the empathetic line he takes. He readily admits this is subjective history. He is bullish on the side of what he sees as a right and just cause as the events happened. This method of writing up imaginary reports can be used by teachers to teach historical methodology and its pitfalls. But the complexity of the approach, though seemingly simplistic, may confuse and be misused by teacher and pupil.

However why not do the research and create an anthology of actual newspaper reports? I recall my son, when in primary school, having as a school project, the task of making an A to Z of the Boer War. It became a family project to compile his home grown scrap book, which included some newspaper photocopies. Had Grobler's book been around we could have taken some short cuts.

The book is very well researched, with nearly two hundred references listed in the bibliography (this alone is an impressive source), though Pakenham was only used as a source for photographs. The indexes of the names of people, places and events has been carefully compiled. There is a chronology and a useful map of South Africa at the time of the Anglo Boer War locating battles and skirmishes. The photographs were taken at the time of the War and were sourced from private and public collections, books and journals (I would have liked information about dates and sources for the images, even if they do fall outside copyright).

This novel large format book raised questions for me about the media in the Boer War. What precisely was the Afrikaner perspective? What other Dutch or pro Boer newspapers were published? Certainly the Grobler approach introduces another perspective to the English reader and the fact that it ran to two reprints shows the collectable appeal.

2016 Price Guide: Fairly available on a website such as Loot for R450 but can be found on local second hand web platforms for a lot less or on international web addresses for a lot more!