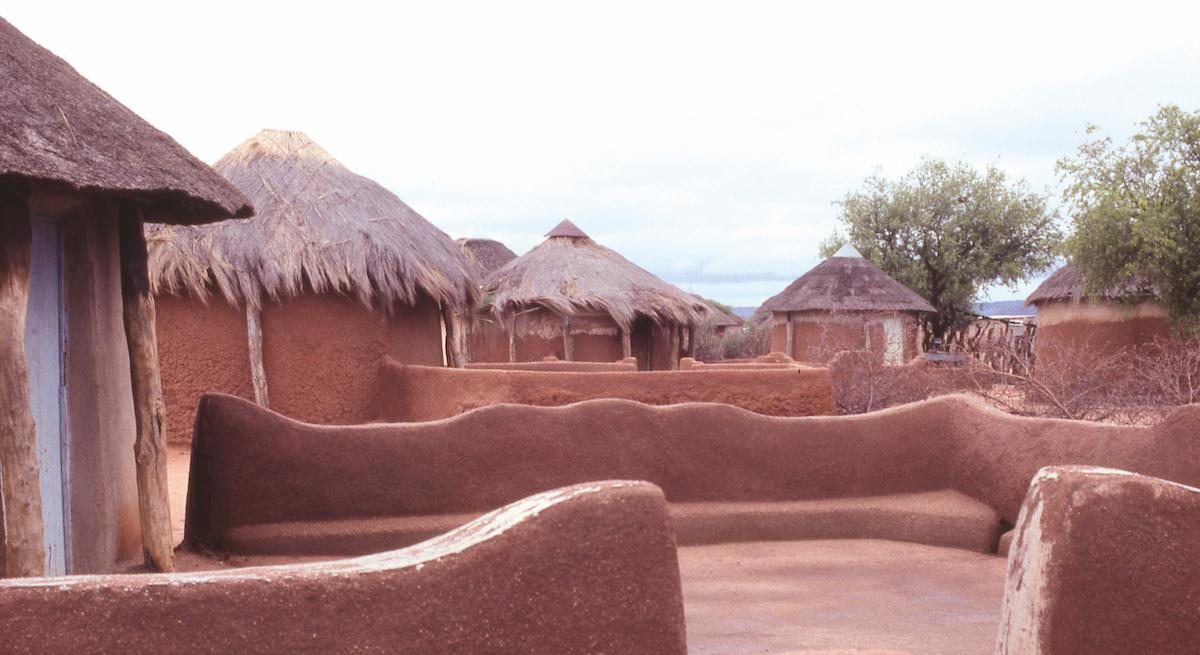 This book was first published in 1984 by the Swedish Council for Building Research. This is a new second edition. The text remains the same as the original study but it has been updated with colour photographs taken at the time as slides but now reproduced as quality colour photographs. There is a new foreword, preface and postscript. 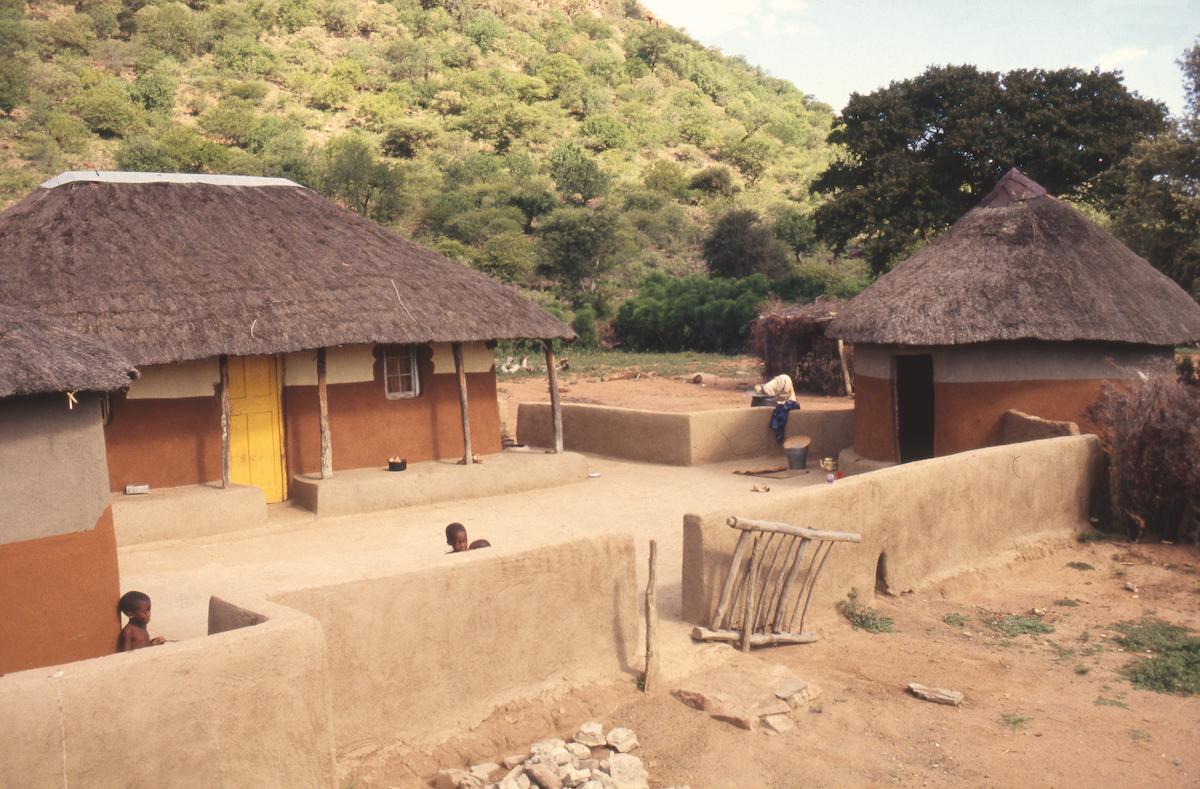 This book caused me to reflect on the nature of development aid provided by developed to developing countries and how a ‘first world country’ such as Sweden can make a valued and valuable contribution to a ‘third world country’ in Africa. Africa should not simply be a laboratory for research or a safari trail for tourists but can and should spark curiosity on the part of scholars who come to learn and are ready to give back to their hosts. I think this book falls into that category. Sometimes it takes an ‘outsider’ to ask the obvious questions, come from an oblique foreign angle and thus to stimulate some home grown probing about what we can learn about ourselves and our own past. We learn most through a dialogue of ideas. 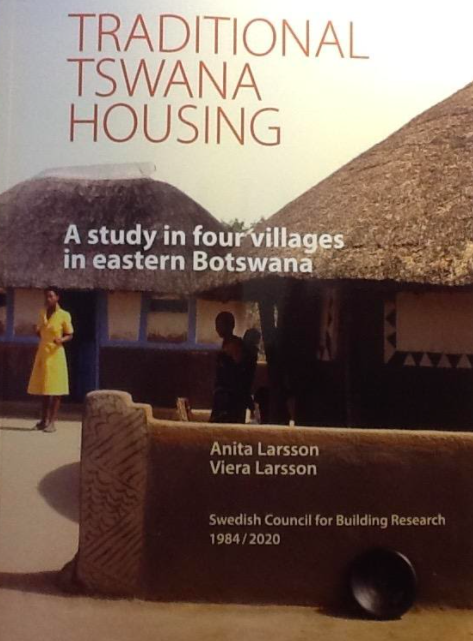 At one level the book is a product of two women who came to Africa from Sweden some thirty years ago, applied their minds and their training to observe and record what they saw. But another level of the book is also a gift to Africa and not just Botswana, celebrating indigenous heritage architecture with a subtext for future applicability. The study is still relevant after thirty years.

The book was the outcome of a research project on Traditional Tswana Housing administered and  organized by the Department of Building Function Analysis, School of Architecture of Lund University Sweden. This handsome volume on traditional African architecture now republished over 30 years after the first book is testimony to the quality of the research and that it is still of relevance today. The original study was printed solely with black and white illustrations; it was out of print and had become  collectable. The production of a second edition using modern printing technology has meant that colour has now been applied and scanned coloured slides taken during the field study in 1984 have been used. 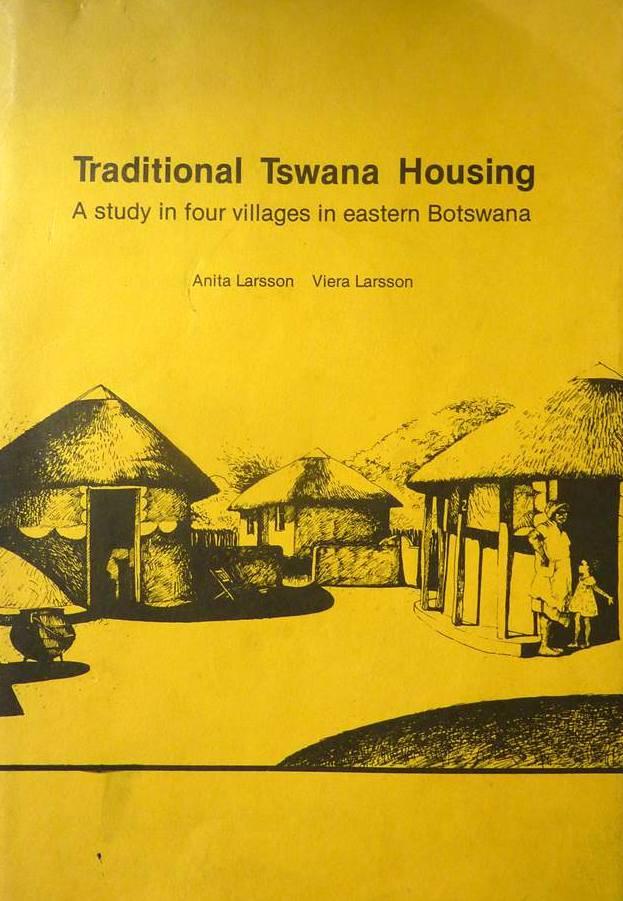 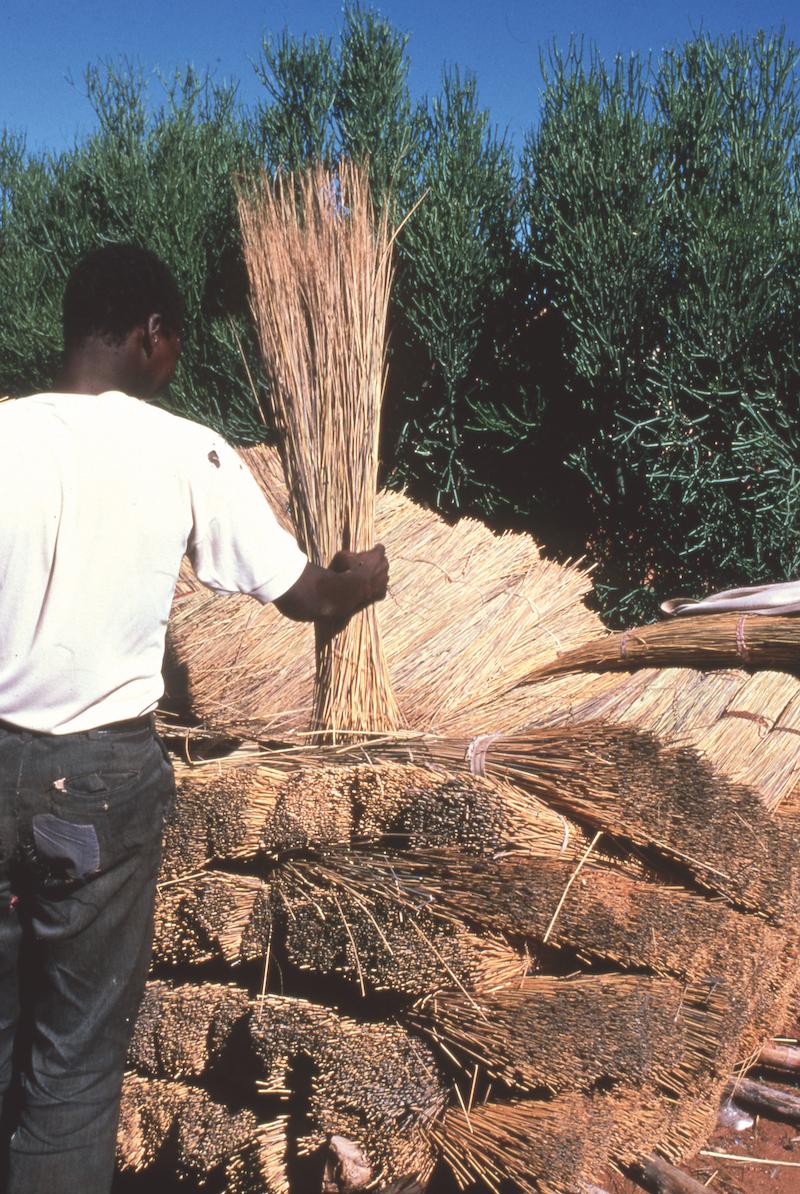 The new edition carries a foreword by Sithabele Mathe, a Botswana architect and postscript by Heather Dodd, a distinguished Johannesburg architect. Sithabele and Heather saw the value of bringing a pioneering Swedish study on Botswana’s domestic architectural heritage to a new generation. Today there is a greater awareness of the finding, saving and preserving of African building techniques and traditions, paradoxically at a time when rising income levels and urbanization has turned the old ways of doing things into an historical curiosity. Traditional buildings fall into the vernacular category and a publication, or rather republication of a now classic study reminds contemporary architects that the past may have some lessons for current practice. Three people have worked to see this book through to publication: Viera Larsson, Heather Dodd and Sithabile Mathe. Sadly Anita Larsson passed away in 2016.

Traditional Botswana buildings were cost effective as they used locally available materials: clay, thatch and local timber. The women were the builders who worked collectively and collaboratively; they were artists and unrecognized as ‘architects’ as the techniques developed over hundreds of years to suit climate, soil and environment. These skills were passed on from grandmother, to mother to daughter.  Today, more modern forms of architecture designed by university trained architects dominate and traditions are often forgotten. The value of this study lies in opening up  what has now become architectural history to review, rethinking and recycling. 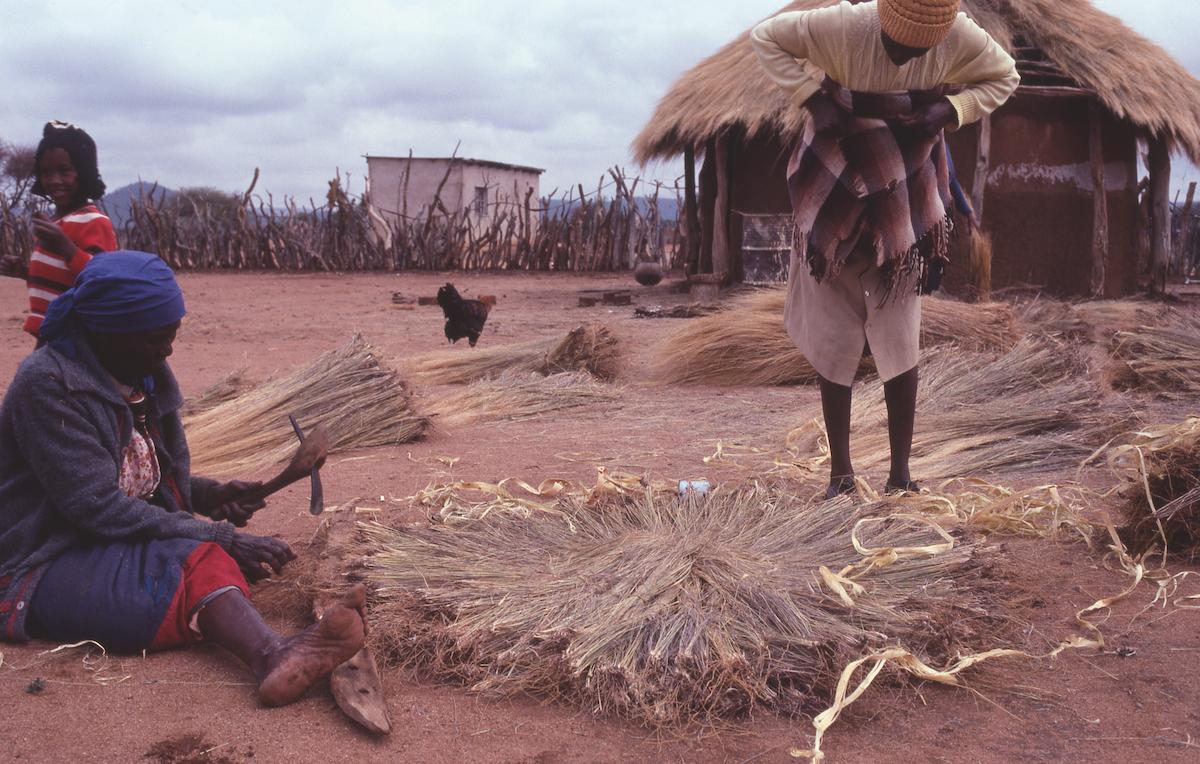 Techniques are passed down to younger generations

This project dated back to 1975 when Viera and Anita arrived in Botswana. Anita was a town planner and Viera was an architect. They were familiar with the urban environment but set out to explore rural areas by visiting different villages at the weekend and documenting traditional housing.  Their research deepened and became more formally organized in the early 1980s when they conducted field research and produced a report. They were particularly interested in the use of space and housing planning with a view to informing not simply scholars in Sweden but rather local Botswana people in order to stimulate and awaken interest in traditional housing. Sometimes it takes a foreigner to bring recognition and point to the value of preserving local African methods; an outsider can tell the local to celebrate her heritage not in a patronizing way but in a spirit of respectful appreciation. The authors were aware that in a post-independence world of the rapidly developing and successful Botswana economy after 1966, the traditional and indigenous fell out of favour with new building materials available. Modern towns looked nothing like traditional villages. They point out that part of the dissatisfaction of people in some types of low cost urban houses was due to the gap between the traditional and the modern.

The project concentrated on documentation of the traditional because of rapid change and because there were opportunities to use traditional techniques in new low cost housing developments. The  underlying question posed by this careful study was whether traditional Tswana could survive.

The  study is thorough and superbly arranged in a very practical manner. The context is presented in a chapter on history, geography, land tenure, patterns of settlement, division of labour between men and women, and housing policy. A chapter on the research methodology leads into the key central chapters on the dwelling as the unit of the household and the characteristics of the Tswana dwelling. I was fascinated by the descriptions of the simple household activities and how space is allocated to cooking and beer brewing. Sleeping, hygiene, storage, heating lighting, cleaning are all discussed to indicate the cohesion of the household and the cooperative nature of labour. Architects will be interested in the section on building methods and how these respond to changes. The final part of the book is about the documentation of Tswana houses and spaces.

In a concluding postscript Heather Dodd, stresses that the idea of place-making and the ideal of home is central to understanding the role and value of this study not simply as an historical study at a particular  moment  of past time but also as a model and an inspiration for future house construction and space planning in Africa. There is a wider relevance for South Africa and this book relates to the work of Franco Frescura on Tswana housing in South Africa and to James Walton’s work on the African village. 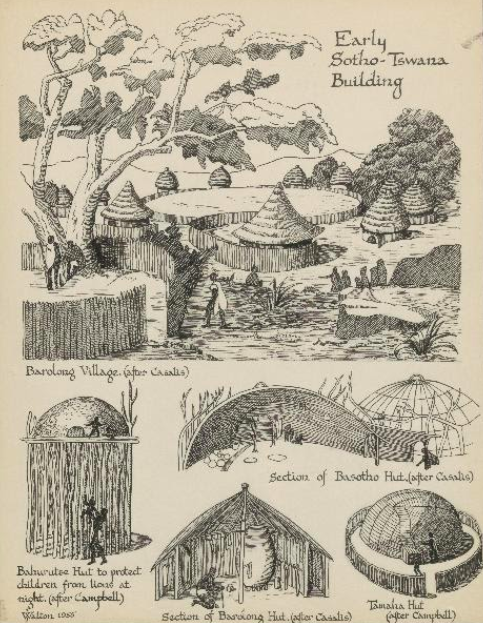 One can also consult a couple of articles by Anita Larsson; there is an article called Traditional Tswana housing published in Botswana Notes and Records, vol 17, 1985 accessible through Jstor.

The  appendices should not be missed - covering information about Botswana as it was in the decade of the eighties, examples of the questionnaires used in the field research undertaken and most useful of all the drawings of types of houses and types of yards. This second edition could have been improved with the addition of an updated description of the Botswana economy of today. The bibliography of background books on the subject stops at 1982. Again an update would have been invaluable.

The republication of this study makes an important contribution to the study of architecture in Africa as a discipline rooted in tradition and in the specificity of culture. It is also a reminder too that in South Africa traditional building methods, design and planning have lessons for the future.