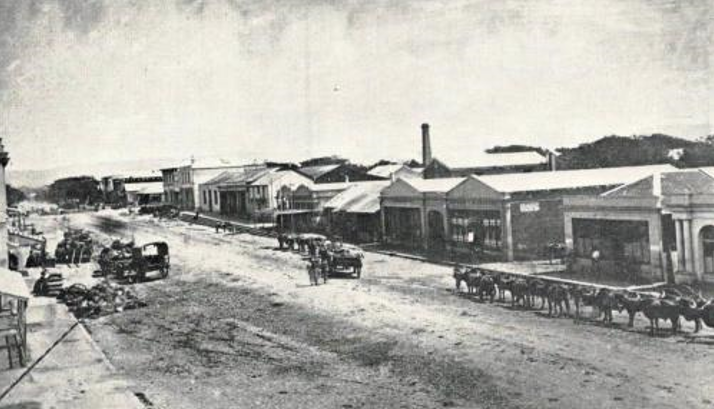 This week I thought I would write about a Durban book as I am about to spend a couple of days there shortly. I have always had a liking for Durban. For me it was an exciting and welcoming holiday town and as a teenager how I looked forward to a fortnight’s holiday at one of the beachfront hotels enjoying sunshine, sea, sand, sunburn and a South African Christmas. My parents were married in the Magistrates court on the Esplanade in 1944 and their weekend honeymoon was in the Grand Hotel before my Dad, who was in the Royal Air Force departed back to England on a troopship. My mother followed some weeks later with the newly acquired status of “war bride”.

Durban too was the port of choice and it was in Durban that I embarked on the Windsor Castle to head for Scotland to study. I always knew Durban as a holiday town until I met my husband who was a Durban man. He was a beach boy who went to University at Howard College in shorts. Courtship involved going to the Durban July. I listened to hilarious stories about his father’s ventures in Durban auction sales and betting with the tic tac man. He introduced me to a different Durban of the suburbs and the settled residential life on the Berea Ridge when we visited my adored mother in law. So for me Durban always had a continuity that lasted until my own children grew up.

This means that Durban books, even the most unpromising of them, appeal to me. I was always interested in Durban history and its mix of Europeans, Indians and Zulus. Here is a book from a time warp... Durban in the fifties. Felix Stark was an entrepreneurial publisher of the fifties and sixties who brought out commercial volumes of an advertorial type with a bit of history thrown in to give the volume status. These volumes on, for example, Johannesburg (1956), Germiston (1959) and then Durban (1960) have become highly collectable.

Durban from its Beginnings to its Silver Jubilee of City Status - book cover.png 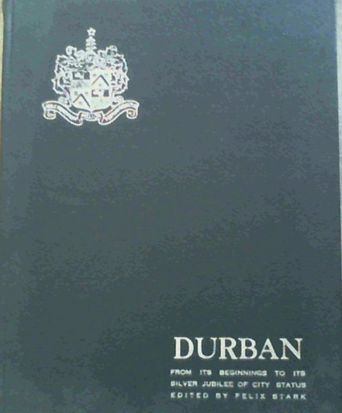 This is a heavy tome and it’s a good book to take pleasure in pouring over on a chilly day as you need a wide lap to support the book. It is definitely not a guide book to Durban. it is an interesting example of a book which, when published was topical and an obvious directory type of book for any Durban business, then dropped out of sight and was regarded as out of date only to return to collectable status.

Stark’s books, rather like Chris Van Rensburg’s publications, were invariably produced with the backing of the city authorities, in this case The City Council of Durban and the objective was to create a sizeable book for presentations and gifts by the city to distinguished visitors to celebrate the silver jubilee (25 years) of city status.

Durban was established in 1824 when Henry Fynn arrived by sea at Port Natal and established a camp at what became known as Farewell Square. A second party under Francis Farewell arrived with a party of 26 people. By August of 1824 Shaka had granted the English settlers an extensive area around Port Natal. Farewell hoisted the Union Jack and took possession of the land in the name of the British Crown. By 1825 there were three distinct colonial settlements: Farewell was installed on the present site of Durban, Lieutenant J S King occupied the Bluff and Wentworth and Flynn chose Umbilo and Bellair. The principal economic activity was trade in hides, ivory, cattle and grain.

Life on the frontier over the next decade or so was precarious, uncertain and unsafe as new settlers of different types tried to establish a permanent presence in the face of Zulu ambivalence and resistance to land occupation. In 1835 the new town was named D’Urban after Sir Benjamin D’Urban, governor of the Cape Colony. The arrival of the Boer Trekkers further complicated issues of governance, occupation and permanent settlement. It did not take long for Britsh settlers and Boer trekkers to fall out among themselves.

The spoils of independence and the establishment of civil authority depended effectively on Cape support, troops, weapons, reinforcements, and British recognition of the Natal Colony. The total population of Durban in 1854 when the community was given borough status was only 1204. There is a fascinating chapter on the history of Durban and its emergence as a port settlement, economic hub, commercial centre and organized civic space. Durban was incorporated as a municipality in 1854 and it was not until 1935 that city status was achieved. The book contains a fascinating collection of early photographs showing the evolution of the town.

The second principal chapter is an overview of Durban in 1960; it was described as a modern, thriving city of 80 square miles and 600 000 people, city revenue of  £18 million, possessing a City Hall, a university, botanical gardens, modern beach front hotels and high rise apartment blocks. In 1960 local colour was best defined by the cheerful “Ricksha boys”, providing rides for the tourists.

A book of this type becomes a documentary record of the architecture of the fifties and sixties - Provident Assurance House, Barclays Bank, the Claridges Hotel, Broadway Court, San Francisco, Las Vegas, built between the thirties and the fifties give a nod to modernity, confident investment and international flair if only in the names chosen. Successive chapters pack in information about modern electrical power supplies, museum and library amenities, telephone systems, fire services, the market departments, a state of art abattoir and efficient city police. Durban’s economic success was dependent on its sugar industry, its port and shipping functions and transport connections inland, oil refining and being the holiday centre of choice for the 'Vaalies'. The greater part of the book is taken up with the advertisements and business histories of Durban’s industries. Apart from the gallery style photographs of the business and industrial leaders these chapters are excellent raw material. They made me recall that our Durban holidays of the sixties were also educational experiences and included visiting the then new sugar terminal, a cigarette factory, a tyre plant or exploring the docks, in addition to entertainment on South Beach.

Moshal Gevisser Advertorial - Durban from its Beginnings to its Silver Jubilee of City Status.png 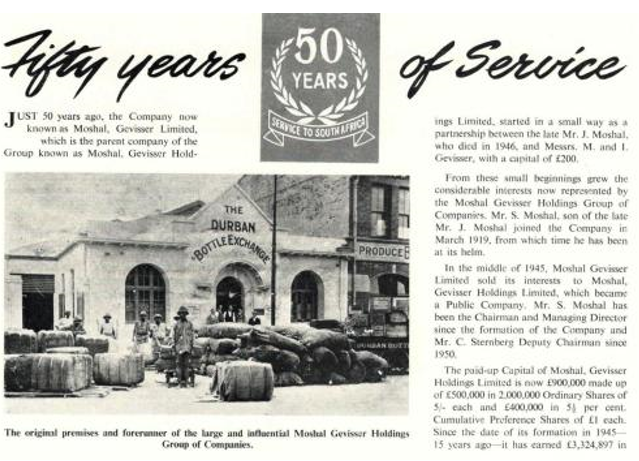 The book adds up to an overview of Durban’s history and its present as it was in 1960. Here was a confident, booming, still very manageable and well organized city thriving within the apartheid model and interested mainly in its white population. The emphasis is on promotional progress and proud achievement. You learn as much from what is left unsaid as from the wide coverage. Perhaps the most interesting and honest chapter is the chapter on Health services and the very real problems of public health.

2017 Guide Price: Anywhere from R50 on Bid or buy to $75 on Chapter 1 online local site and up to $100 on Amazon (don’t forget to add the postage which is always additional).