Review of Howard Timmins and his Protégés

I always welcome books about books and book people. If people are interested in the making of a book they are extending their grasp and reach of all things bookish and book collectable. I was delighted to acquire this new book on a recent visit to Cape Town and found myself reading it from cover to cover in a couple of hours (it is just over 100 pages). If you are a book collector and collect South African books in particular, this book usefully falls into a background reference work about Howard Timmins and about a selection of popular and often collectable authors. 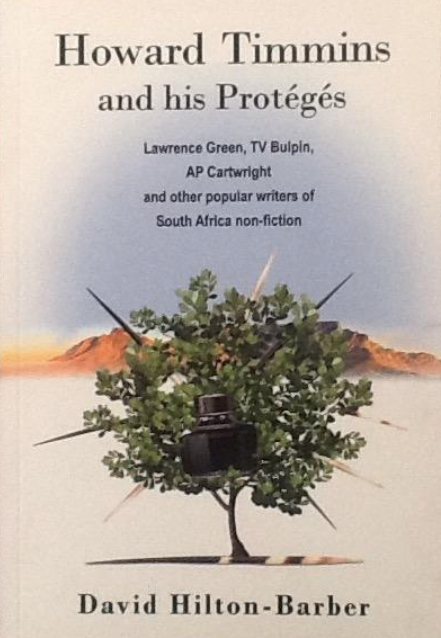 Timmins was a South African publisher. He was acknowledged as the doyen of South African book publishers from the date of the establishment of his own book publishing house in 1948 until he retired in 1974 and his publishing company was taken over by Anthony Ashford (which was absorbed into Struik within ten years). Howard Timmins was born in 1904 and died in 1984. The niche Timmins carved in the local book scene was that of publishing, promoting and nurturing what has been described as popular non-fiction writing. After the second world war he groomed an extraordinary range of writers of travel, history, gardening, biography, anthropology and military history books.

The Timmins story is very briefly told. He was born in Kimberley in 1904. His parents came from England of an Anglo-Irish background and his father was a schoolmaster. They returned to England in 1906 aboard the SS Suevic, which ran aground off Cornwall while en route to Liverpool. Howard was one of the toddlers and babies rescued by Cornish fishermen. All the passengers survived the disaster. The Timmins family settled in Barnet, a borough of London. As a young man he studied publishing and joined George Allen and Unwin, an excellent choice for a solid grounding in the book publishing world. In 1927 Timmins decided on a career in South Africa and became a representative of John Dickinson, the manufacturers of Croxley and other paper brands. In 1936 he became the agent for Hodder and Stoughton and promoted H & S books in the South African market, travelling widely. It was not until he was well into his forties when he was an established family man with four daughters that Timmins launched his own publishing venture. Wartime conditions had restricted paper supplies and limited production runs so a new post-war venture on a wave of recovery with local readers ready for new books made this a daring decision for a newcomer (but clearly a man with energy, style, judgement and a capacity for friendship with his authors).

The best thing about Howard Timmins was that his authors probably thought he was wonderful. Publishers are often seen as the hard nosed business types who take risks and keep their advances to a minimum and royalties to the lowest possible percentages. They are shrewd and have to make judgement calls about whether a book is likely to sell and find a market. A book is a product with a price and it’s the reader who decides on whether the book becomes a bestseller. It is difficult to tell how Timmins managed his enterprise as a publisher. Hilton-Barber tells us nothing about the financial aspects of this book publishing venture; what capital was involved, where the finances originated and who the bankers and backers of the new company were. What were the anticipated and then realized print runs? I suppose I would have liked something more substantial in publishing history. But then I guess I am one of those excessively pedantic academic specialists who expect footnotes, archive references, a bibliography and an index. In that sense this book is a memoir of Timmins and his writers and has none of the scholarly conventions. Hilton-Barber appears to think that being accessible and readable is incompatible with sound scholarship. I disagree.

Hilton-Barber comments that his readers are likely to be familiar with the authors published by Timmins and his very limited hope is that readers will again revisit these writers.

The book moves on to explain a bit about the authors in the Timmins stable but he concentrates on just a few of them. One of the earliest must have been Murrogh Nesbitt who wrote his own story under the title The Road to Avalon. I read the book as a child. Strangely it came out without a date of publication but it can be purchased today as an item of Africana for less than R100. Of course the price of a book on the secondary market is also a reflection of the success of sales and the print run and Timmins was off to a good start. Lawrence Green became a regular author published by Timmins. The pre-Second World War Green books are the really collectable ones (six published by Stanley Paul in England). The Green titles published after 1948 in Cape Town by Timmins (and they came out annually in time for Christmas) constituted a library of readable non-fiction. Green became something of an industry in book production and Wikipedia describes him as an author who recorded little remembered or noted facts of some historical or cultural significance of the South African scene. I was interested to open a copy of Tavern of the Seas that I bought at a charity book shop recently, still with a delightful dust wrapper, now slightly yellowing and foxed. It was serendipitous to find out that this specific book (published in 1947) had been dedicated by Green to his publisher. Lawrence Green’s Where Men still Dream was published by Timmins in 1945, sold 25 000 copies and went to five editions. It was an enviable record. I was not really a Green fan but I do have a complete run of  27 titles published by Timmins from 1945 until his death in 1972. At one a year it became a small goldmine for Timmins and for Green.

Tavern of the Seas - Book Cover.png 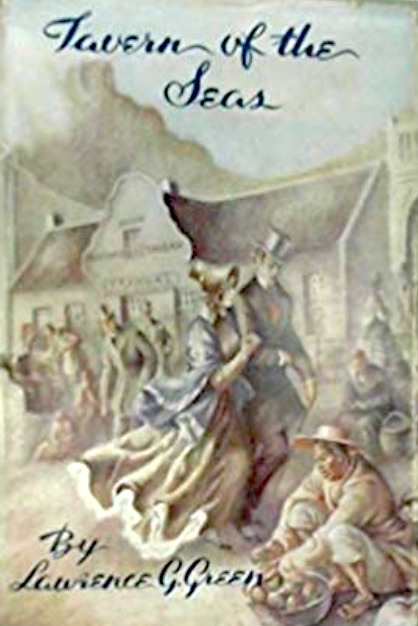 These Wonders to Behold - book cover.png 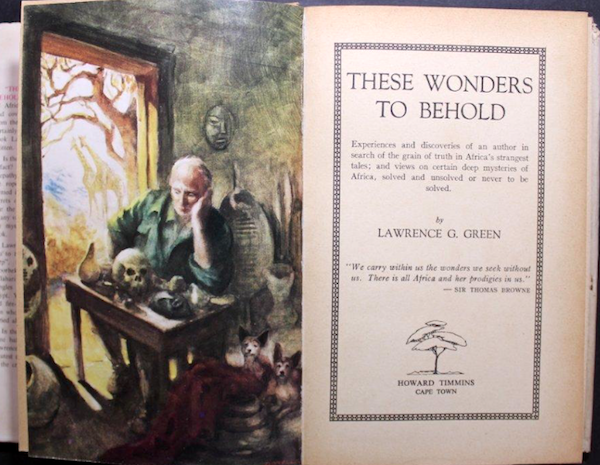 These Wonders to Behold by Lawrence Green published by Howard Timmins in 1959. Note the Timmins Logo.

A shelf of Lawrence Green title via The Saleroom Auction site.png

A shelf of Lawrence Green titles (via The Saleroom)

Another writer who earns a chapter is T V (or Tom) Bulpin, who was an enormously talented writer about Southern African travel, hunters, hunting and personalities and also lightweight history. Bulpin worked for Timmins as a sales representative, published some of his books with Timmins but went on to establish his own publishing company. Hilton-Barber quotes extensively from Bulpin and this background provides a fascinating account of George Rushy (his biography written by Bulpin was The Hunter is Death) and Johan Colenbrander (the book was called The White Whirlwind but Hilton-Barber does not give us the title). Colenbrander was Rhodes’ interpreter during his forays into the land of the Matabele. This is the sort of book where the tale of larger than life person leads on to that of another character.

Bulpin titels - Islands of a Forgotten Sea and To the Shores of Natal.png 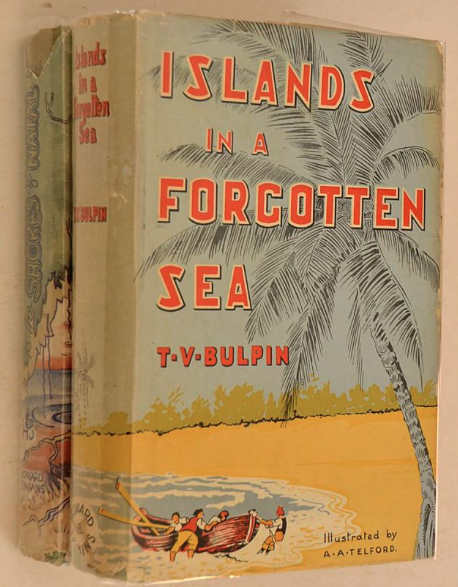 There are chapters about other Timmins authors such as A P (Paddy Cartwright), popular writer of gold mining and mining company histories and Carel Birkby who was a newspaper man and wrote excellent military histories. In fact this chapter was contributed by Carel Birkby’s son Rory. 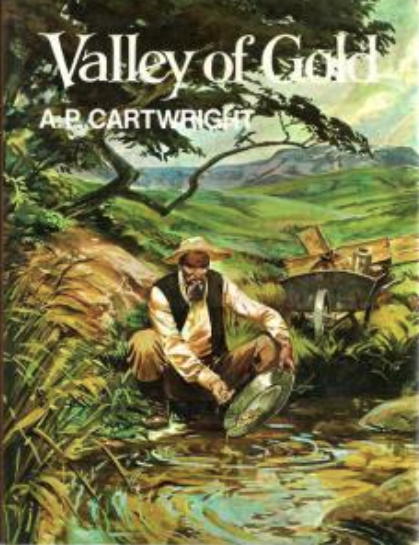 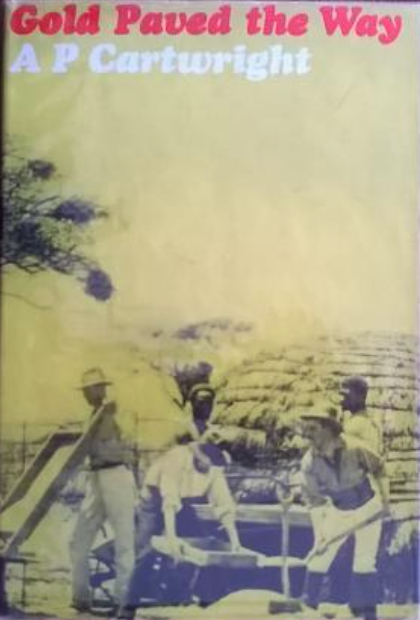 There is a fairly short yet fascinating account of the making of Vladimir Tretchikoff with Timmins himself authoring the coffee table book on Tretchikoff and his portfolio of prints (1969). This volume is highly sought-after today but Hilton-Barber does not venture an opinion as to whether Timmins played a part in the popular success of Tretchikoff. Tretchikoff certainly thought that the trajectory of his life changed because of Timmins. 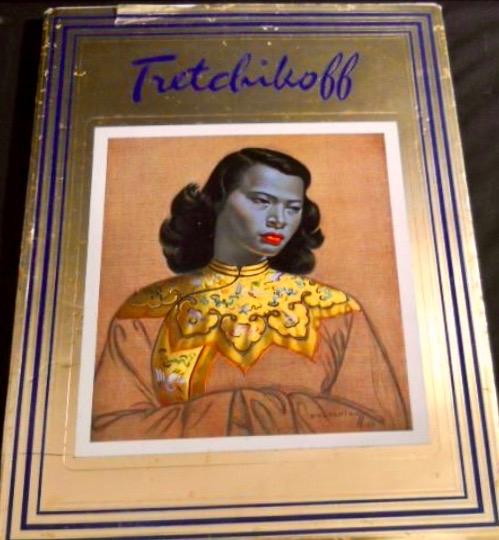 Timmins as author and publisher. The Tretchikoff book published in 1969 (Bryanston Auctioneers)

Then Hilton-Barber veers off course into a chapter on Stuart Cloete who was not a Timmins author but who is included anyway because of his contribution to the popularization of South African history in his novels. I found this chapter the odd one out. It is interesting but does not belong in a book on Howard Timmins. This is even more obvious when other authors in the Timmins stable such as Eric Rosenthal, Sima Eliovson, Reg Pearse, David Steele, Chris Barnaard, Thelma Gutsche, Gerard Bhengu, Ernest Ullmann, Benjamin Bennett, Roy McNab and a few others are all given a quick overview in a single chapter. Was the author running out of steam or did he tire of the research required for a more detailed history of the Timmins publishing venture?

One of my favourite authors in this “stable” was Alpheus Williams who was the son of Gardner Williams - both wrote about African mining adventures and the two volume study, The Genesis of the Diamond by Gardner Williams is a classic.

Overall for a fairly short volume on Howard Timmins, David Hilton-Barber takes us on a good book journey through the publishing ventures and beyond of Howard Timmins over that rich era that ran from the later forties to the early seventies of the 20th century. He has succeeded in his objective of making me reach for Timmins’ books and refinding his authors. My remaining regret was that minor errors in typography, repetition or grammar were not caught ahead of publication. For example, surely the phrase on the cover should be “and other writers of South African non-fiction” and not South Africa non-fiction.