A Johannesburg Album Historical Postcards by Oscar I Norwich 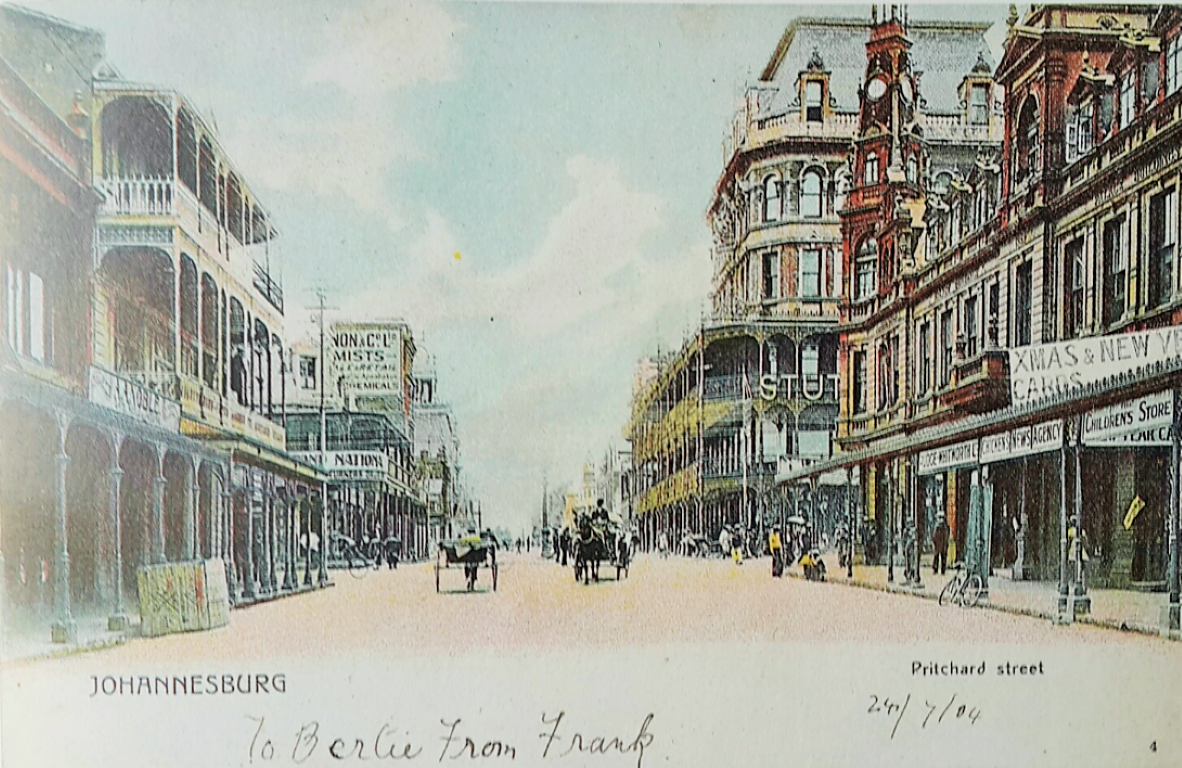 Albums are normally highly idiosyncratic and personal to the individual who has assembled a collection of photographs or stamps or newspaper cuttings. In 1986 Dr Oscar Norwich, was a medical man with an insatiable appetite for collecting African maps and all information relating to Johannesburg history. This published album was a 1986 centenary celebration of the City of Johannesburg. It is a large folio sized book of his own collection of Johannesburg postcards. Norwich also published a couple or books on African and Southern African maps and his collection of maps was sold to Stanford University in the USA and so lost to South Africa (though it is some compensation that one can view the maps on line, a great boon to scholars). 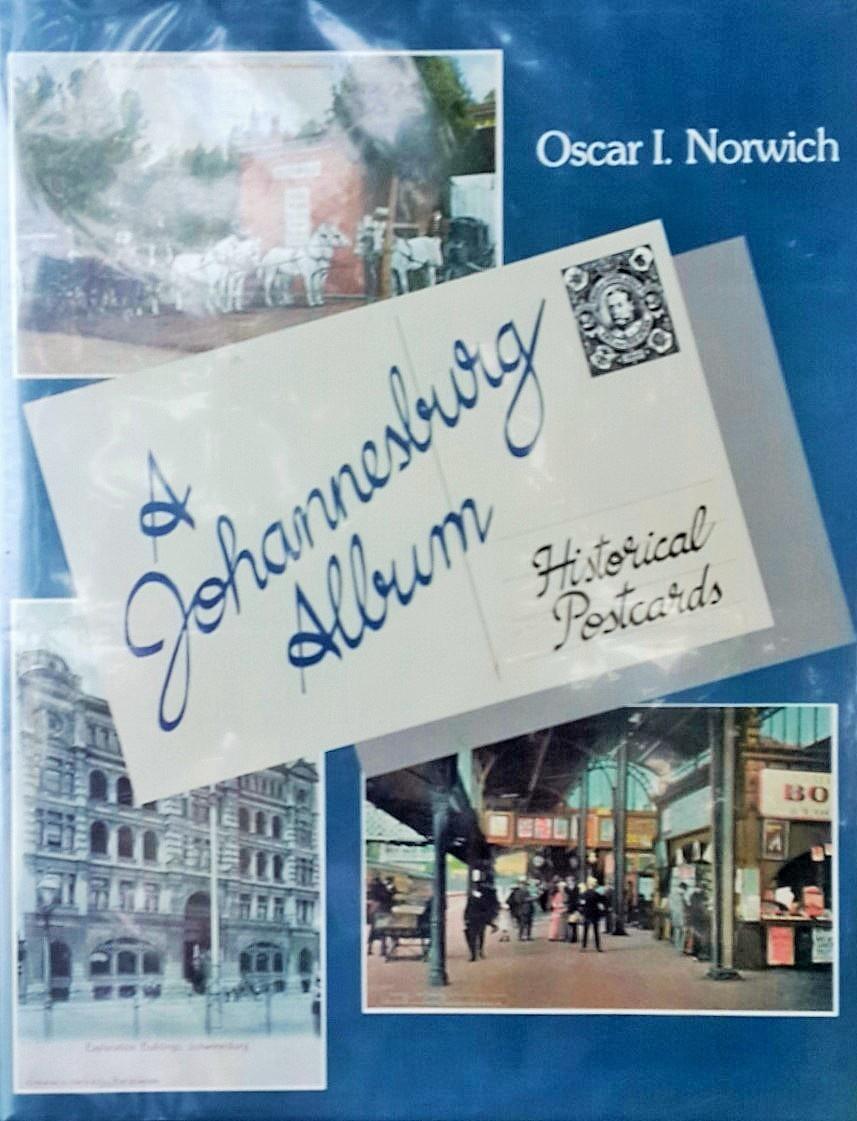 Norwich was a passionate Johannesburg man. He founded the Johannesburg Historical Foundation and led tours of Johannesburg. He was energetic and indefatigable in his search for the arcane, the scarce relic and the unusual in Johannesburg. After his death in 1994 the Foundation folded and the papers and records are archived and accessible in the Historical papers at the University of the Witwatersrand. A society which flourished to study and promote Johannesburg history itself has become a subject of history. 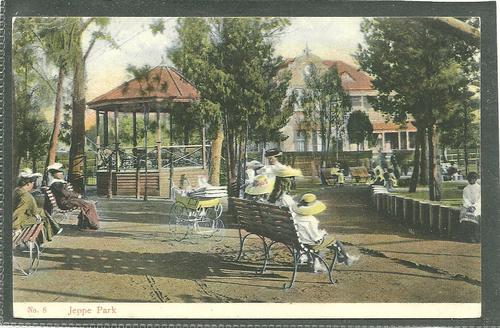 Norwich called his book "A Johannesburg Album ". It is a modest title but it was and still is a unique book. It is a well laid out and quality looking presentation of over 300 historical postcards of old Johannesburg, drawn from his personal collection of over 500, with six post cards displayed on a double page spread. Norwich assembled his collection over 40 years. Most of the post cards come from a time when post cards were a quick, informal, reliable and inexpensive way of communication:  they were hand tinted and very few of the Norwich selection are in black and white or sepia toned. Before 1918 the local postal stamp was half a penny. Deltiology is the word describing the collecting and study of post cards and it is apparently the third largest hobby after stamps and money. Post cards are an aspect of postal history and philately.

The golden age of the postcard was between 1898 and 1919 and this roughly is the period for the bulk of the Norwich collection, though he includes some earlier 1890s cards .

Early Doornfontein with the Lion Shul - post card for sale on Bidorbuy.jpg 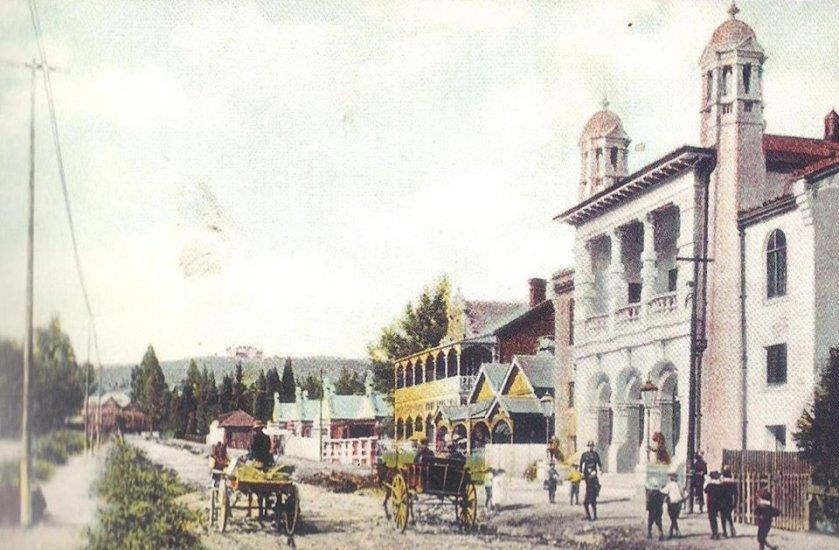 Early Doornfontein with the Lion Shul. Synagogue is still in place (Bidorbuy)

Of course it is surprising that a book published a mere 30 years has slid itself into history as a product of pre Internet days. Today if one googles "early Johannesburg history, post cards", one is spoilt for choice as post cards are a ready item of trade but prices have risen sharply and one needs deep pockets to indulge this hobby. Gone are the days when one could search a dusty cardboard shoe box of post cards in a neglected remote corner of a second hand book shop.

Many of the post cards first published by Norwich have become familiar almost iconic images of early Johannesburg because of his efforts and passion. There is the interesting question, as to whether a 100 year old postcard falls outside copyright ownership or whether by publishing this collection and owning the post card in 1986, Norwich or his publisher, AD. Donker could claim "all rights reserved" and prohibit republication without their permission.

Norwich has grouped his postcards around distinctive parts of Johannesburg, covering the old city centre around Market Square, Doornfontein, Jeppestown, Fordsburg, followed by the suburbs of Orange Grove, Parktown and Saxonwold, Yeoville and Berea and Braamfontein. This is followed rather oddly by chapters on Crises and Events, the Chinese on the Mines (even at the time regarded as an exotic import and hence a ready subject for a post card picture) and then some 11 pictures of early mining. The difficulty is that these compartments are not water tight and some central Johannesburg pictures were included in the suburban sections, and some suburb photos have not been dropped into the appropriate chapters. A map of Johannesburg and its encircling residential suburbs circa 1902 sets the scene in a frontispiece (but the source of the map is not given and there are far better early city maps).

How useful are picture post cards as a source of information? They are all photographic images and at one level the camera "never lies". After all the picture post card came into its own because the photographer became a familiar figure in Johannesburg from its early days. Johannesburg was a much photographed city because it came into existence as photography matured and the camera could be moved from studio to capture street scenes. The history of the city can be viewed in a series of photographs from as early as 1887. The combination of gold mining bonanza town, with those stark images of headgear, the frenetic town centre with cabs, carts and horse drawn trams and the suburbs on the ridges made Johannesburg an exotic place, perfect for the post card image. We are the lucky beneficiaries to be able to study the street views, the buildings, people at work and in parks. Norwich concentrated on the general vistas and views rather than on individuals. 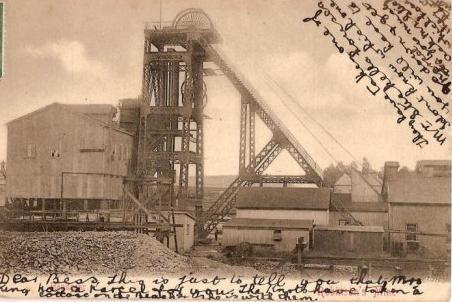 However, for photographs to be a solid historical source they need a date, a pin pointed location and an explanation. Norwich has provided a detailed description in a side panel of text for each post card, but frustratingly, he has not ventured into dating the post card. Dating postcards is extremely difficult as the original post card publisher deliberately did not date the post card to extend their contemporary usefulness. Sometimes post cards can be dated through research into the publisher of the card, or a date may have been written on the message or a postal stamp may carry a date. There is a date distinction between the divided and undivided backs of cards (divided backs belong to the Edwardian decade). White border postcards were common after 1915. The commencement date for A Johannesburg Album is easy, 1886 or thereabouts but what is the termination date for this collection?

Most of the pictures appear to come from the pre 1920 period but there is one of the "new" Johannesburg railway station dated 1932 but the caption talks about the dispute over the new planned railway station at the Wanderers Club which was only finalized in the 1940s and the new railway station complex took shape in the 1950s. The next post card is of the Union grounds in 1906 and another postcard of cricket on the Union grounds, features in the chapter on Yeoville Berea.   Wanderers View was not in Yeoville or Berea. Having used suburbs as an organizing principle, the slippage into other suburbs is a point of confusion. There is a post card of the University of the Witwatersrand's College House (John Perry was the architect) and also a post card of The Central block frontage "soon after its completion" but not dates given nor did Norwich include any architectural information. 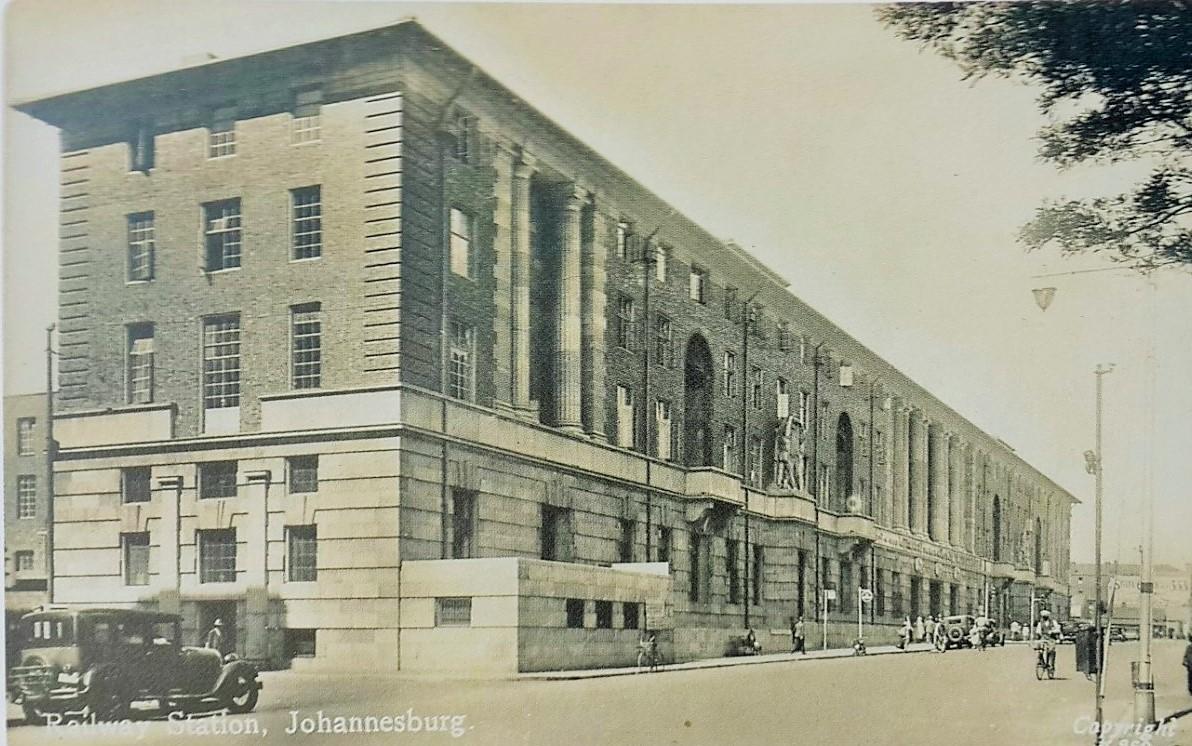 In the section on Crises and Events, the author fails to explain his selection of the Jameson Raid (1895/6), the Braamfontein Dynamite explosion (1896), the Rand Strike (1913) and the anti-German incidents of (1915). Perhaps it is s good picture rather than considered history that determined the choice of post cards. By limiting this selection to picture post cards, it meant that other formats for photographs of Johannesburg (newspapers, the Barnett Collection, contemporary souvenir albums, handbooks) fell outside the net.

The problem of sequencing and dates and limited selection was compounded by many errors for directions (a view which was say, 'eastern' when it was actually 'western') and a good many errors in the identification of buildings (confusion for example of the first and second stock exchange buildings). Norwich needs to be read with care and cross referenced to van der Waal, Chipkin and others. In the 1990s several methodical critics, listed the specific errors that Norwich had made. These lists circulated informally and quickly became inserted into copies of the book. I have one such list of 12 pages of errors notes and queries written up by Ian Walter in 1996. So it is a case of scholar beware, treat the book as a lively and very beautiful tribute by a keen and knowledgeable amateur.

Each publication is always to be celebrated because it adds to the archive and record of the City's history. Norwich's post cards add up to a charming album to be leafed through for the pleasure of connecting with views of by gone days. However, as a source or reference, there is need for caution.  I still recommend the Norwich book because it is now an essential item of Johannesburg collectible Africana.

Today, Johannesburg post cards feature on the internet and I have found some fascinating ones for example on postcardparadise.blogspot.co.za or at transvaalstamps.org.uk or on-the-rand.co.uk. Great places for trading post cards, which often feature Johannesburg cards, are bidorbuy, delcampo.net, or eBay.  There's a whole world out there of early postcard images, but interpreting them requires some scholarly study.

James Findlay's monthly book fair (click here for details), introduces a couple of dealers in post cards and maps and there is one dealer who specializes in reproducing beautiful old post cards as modern decorative prints.

I have selected a few Johannesburg post cards found on the web to illustrate this review. I am not a collector of postcards but enjoy studying postcards for what they reveal about the city.

2016 Price Guide: A Johannesburg Album is out of print and becoming increasingly hard to come by. As a rough guide the prices vary from $50 to $500. Look for a quality copy with dust wrapper.