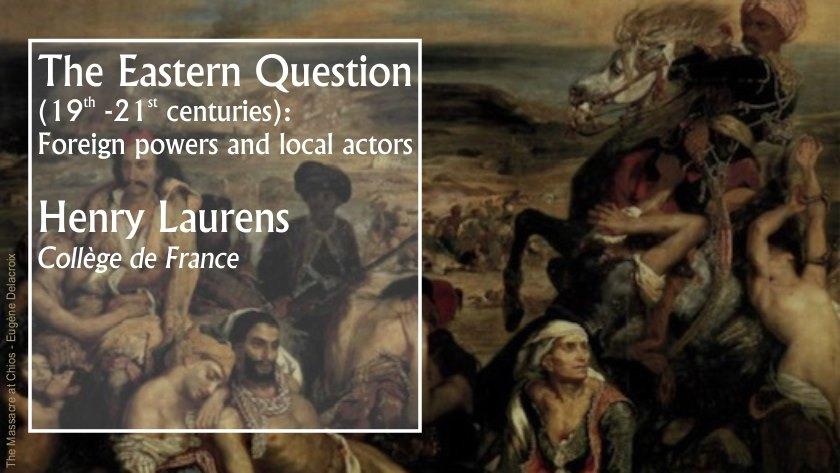 Within the framework of the agreement between the Collège de France and the University of Pretoria,  IFAS Research (French Institute of South Africa) and Wits - University of the Witwatersrand are pleased to invite you to the conference "The Eastern Question (19th-21st centuries): Foreign powers and local actors"

For two centuries, the area commonly known as the Middle East has been defined by a series of power struggles between local, regional and international actors. Their actions have followed a general pattern of involvement (when local actors invite others to intervene) and intrusion (when foreign powers enter the field).

European diplomats started to use the notion of the Eastern question to characterize the new diplomatic development in the Eastern Mediterranean Sea at the beginning of the 19th century: to preserve European peace after the Napoleonic wars, the great powers needed to settle Ottoman affairs in order to avoid European conflagration. This new concern for the Ottoman Empire meant engaging with local actors – representatives of minorities, administrative actors, etc. – to preserve the Empire by pushing for reforms. At the same time, these local actors requested support from foreign partners to strengthen their position on the local stage by adopting new standards.

Professor Henry Laurens will highlight how this pattern explains the relation between the West and the East, the contradictions and local changes from which the contemporary Middle East emerged.

Professor Henry Laurens is professor at the Collège de France, holding the chair in “Modern history of the Arab world.” He first studied the advent of orientalism , the cultural fabric of Western interventionism in the Middle East, during his PhD studies, providing insights  into the  first enterprise to colonize part of the Middle East based on the new ideas that emerged from the French revolution. He expanded his scope of interest in his masterpiece, The History of the Palestine Question, taking into account both the long-term history from 1779 to 2001, and the short but extremely tense moments of discontinuities and reconfigurations throughout the last two centuries. His approach is, on the one hand, chronological and, on the other, attentive to the formation of institutions, traditions and specific forms of cultures of violence.  He proposes a novel analysis of space, time and space-time relations and also insists on the double, contradictory aspects of the “Palestine Question”, which is both an inter-regional and an international issue. Since 2015, Henry Laurens has launched a new project revisiting the relations between East and West by questioning the “Crisis of the Orient”.