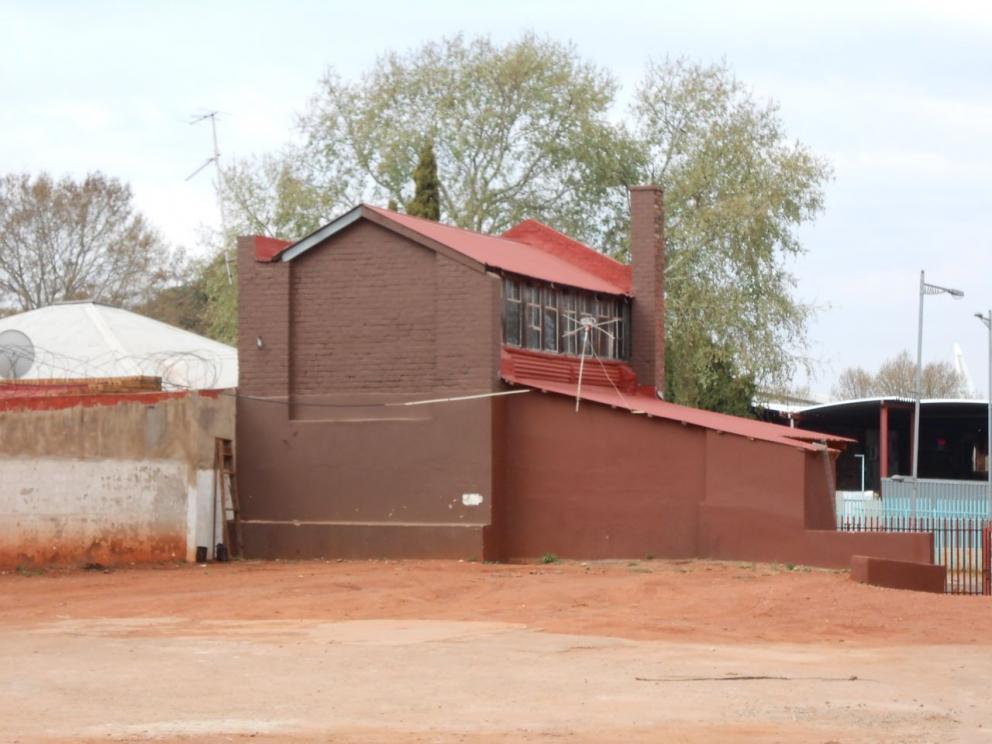 A few years ago the Provincial Heritage Resources Authority Gauteng (PHRAG) approved the demolition of the Anton van Wouw House in Doornfontein on the condition that the studio where van Wouw completed many of his famous works was preserved. As word of the demolition spread many people struggled to come to terms with the decision as the Van Wouw House formed part of the Joburg100 list (a list of 100 sites worthy of preservation compiled in the lead up to Johannesburg's centenary celebrations). Below is an excerpt from the report compiled by West Rand Heritage Consultants at the time. It provides fascinating historical snippets and unpacks some of the complexities that made the PHRAG decision such a difficult one.

The Anton van Wouw House with the Alhambra Theatre and the Lion Shull form an important node of historical buildings with architectural significance. However, due to the degrading of the area and increased crime rates, the historical significance of the buildings is under severe threat. The Anton van Wouw House is already in a derelict and inhabitable state. Restoration of the house requires a considerable amount of money to make it usable again, the costs of which the owner will not be able to recover through leasing or selling of the property. The small scale of the house makes it also no longer an economic proposition that matches 21st century property values in the area, especially in view of the redevelopment plan for the area.

"Anton van Wouw, the renowned South African sculptor was, according to plan 26595, the owner of the property by 1910. It is not known who the architect of the house was, that is, if it had an architect at all. This type of house was normally erected by contractors during the post-war period literally hundreds of similar houses sprung up like toadstools all over the grassy veld surrounding Johannesburg." (GM van der Waal, et.al. Early Johannesburg; Its buildings and its people, p.19).

"The well-known sculptor was born in Driebergen, Holland in 1862. He came to Pretoria in 1890, where he worked as a gunsmith; taught drawing and painting after hours. He also drew press cartoons and caricatures before he was commissioned to provide mural landscapes for the reception-hall on occasion of the opening of the Pretoria-Lorenco Marques railway line. He lives and worked at 111 Sivewright Street from 1907 to 1937. In his studio at the back of the house he produced some of his best known works, including the figure of a woman used in the Women’s Monument near Bloemfontein. He collaborated on this with the architect Frans Soff. He was also responsible for the less successful figure of a woman incorporated into the Voortrekker Monument near Pretoria, a powerful bust of General Christiaan de Wet and the statue of Louis Botha in Durban. A great deal of his work, although representational, captures the rugged and emotional essence of his subjects. During van Wouw’s lifetime the house was a favorite gathering place for the artistic community, who came to share his hospitality and sample the meals which he delighted in to prepare." (The Star, September 1, 1983, p.11).

According to the SAHRA database of early South African architects, the house was designed for van Wouw by Theophile Schaerer. Schaerer was born in Zurich, Switzerland in 1874. He trained as an architect / engineer at Winterthur, Switzerland where he qualified in 1894. He was on his way to Peking when the Boxer Rebellion broke out in China an in 1903 he arrived in South Africa where he remained and worked on and off for about 40 years, mainly in Johannesburg. Schaerer was first listed in Johannesburg in 1905. He is renown for his design of the Park Synagogue (the Great Synagogue) in Wolmarans Street Johannesburg, which apparently remains the “largest Jewish edifice in South Africa” (The Star, Nov 8, 1984).

Schaerer designed a small wood and zinc studio for Van Wouw in 1910 (plan 26595). Alterations were done to the house according to plan 29204 in 1912 and in 1913 (plan 38689) a room was added to the kitchen. Extensions to the studio for A van Wouw was done in 1915 (plan 42726). The large studio is designed for van Wouw by Gordon Leith, another renowned South African architect. The double volume face brick studio with clear storey lighting is attached to the house on the west side.

George Esselmont Gordon Leith was born in Knysna, Cape Province, and educated at the Staats Model School in Pretoria. His family moved to Pretoria in 1889. Leith is best known as one of the masters of the so-called traditional style in South Africa during the first half of the 20th century. His classicist designs for official bodies, especially in the bigger towns of Gauteng, such as the Reserve Bank, town halls and technical colleges, secured his place in the public eye. The several modernistic hospitals by him in Johannesburg confirm his interest in the modern outward form. Leith was seen as a link figure between the classical and the modern architecture.

Van Wouw must have moved to reside in Pretoria by 1937 for his sculpting of the Woman and Child statue at the Voortrekker Monument as one Louis Krawitz took up residence at 111 Sivewright Street in 1937. It is not known what happened to Krawitz. The property was transferred into the name of Tecolett Prop Pty Ltd in 1968 under title deed T8724/1968, who also obtained the adjacent Erven 19 and 20 at the same time (Title Deed T14140/1967).

After van Wouw left, the house fell into disrepair. The house was in a very neglected and derelict condition in the early 1980’s, when a call was made for the restoration and proclamation of it as a “national monument”. As a result, the house was restored and Jonathan Montaque Fitt, a top Johannesburg chef, opened a first class restaurant in it. The Anton van Wouw Restaurant opened in November 1983. Several alterations were done at the time to make the house compatible for its new function. The drawings for the renovations and additions were done by Meiring, van der Lecq, Thomas and Ronga, architects from Pretoria (Plan 400228). The alterations included conversion of the studio into a kitchen, providing a new entrance hall on the western side of the house with parking for the restaurant behind the Alhambra Theatre.

The restoration of the house was, according to The Star of 1 September 1983 in an eclectic look. The various bedrooms and parlours in the house became private dining rooms in which guest’s entertained small groups of people. Unfortunately the house lost its residential character and atmosphere due to the extensive alterations made in 1983, with the result that an application to declare it as a “national monument” was declined in 1984 (SAHRA file 3/1/3/Joh/59). [There are conflicting reports of the status of the house. It appears as though it did receive National Monument status a few years later.]

Ultimately the restaurant failed to stand the challenges of the continuing degeneration of New Doornfontein and an increase of crime in the area. By 2008 the tenant abandoned the property and left the house in a shocking state. Currently it is illegally occupied by squatters with up to six people occupying a single room. Privacy is ensured by means of a curtain or sheet hanging between the beds."

The owner had at several occasions involved the SAPD in evicting the illegal occupants, but to no avail. They return to occupy the house as soon as the police had left the premises. Their presence in the house and aggressiveness has a security risk to the extent that security guards had to accompany the heritage consultant during the site visit and taking of photographs for this application. The presence of the squatters became a danger and security hazard to everyone in the neighbourhood.

The current owner donated the use of the parking area behind the Alhambra Theatre to the Doornfontein Hebrew Congregation to be used as playground for the school and for parking at sermons in the Shull. On demolition of the house and other buildings on the property, the owner will expand the donation of usage to the Doornfontein Hebrew Congregation as the available area does not provide ample playground to the orphaned children at the synagogue.

The original house was a single storey building with hipped corrugated iron roof, and a verandah on the street side. The original building has a stone plinth and face brick detail around windows of a projecting bay. Dressed stone dwarf walls are at the entrance steps. Attached to the west side of the house is a finely created face brick double volume artist’s studio with clear storey lighting.

This type of house was normally erected by contractors during the post-Anglo Boer War period – literally hundreds of similar houses sprung up like toadstools all over Johannesburg and the surrounding towns. It is in the small-scale style of domestic architecture, built to almost a four-square plan.  This type of house reflects the lower status and income of owners / occupants.

The current condition of the house is derelict and totally inhabitable, despite of the fact that it is occupied by squatters. It is gutted and beyond repair. Restoration of the house will require a considerable amount of money to make it usable again, the costs of which the owner will not be able to recover through leasing or selling of the property. The small scale of the house also makes it no longer an economic proposition that matches 21st century property values, especially in view of the proposed densification and redevelopment plan for the area. 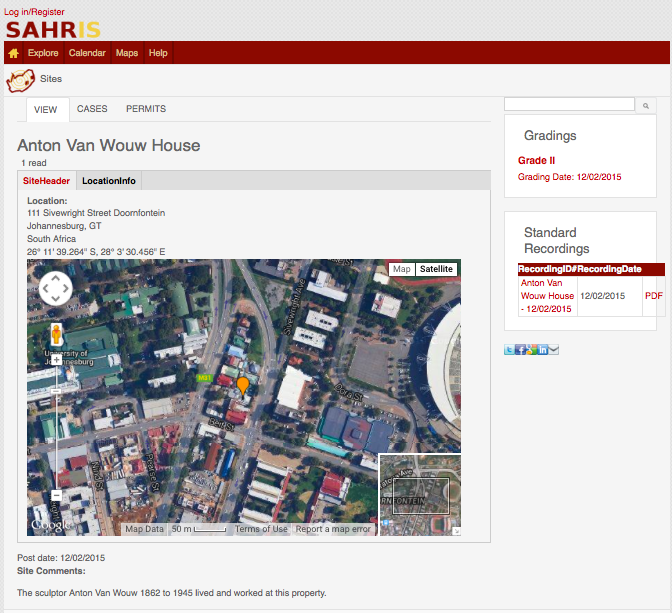