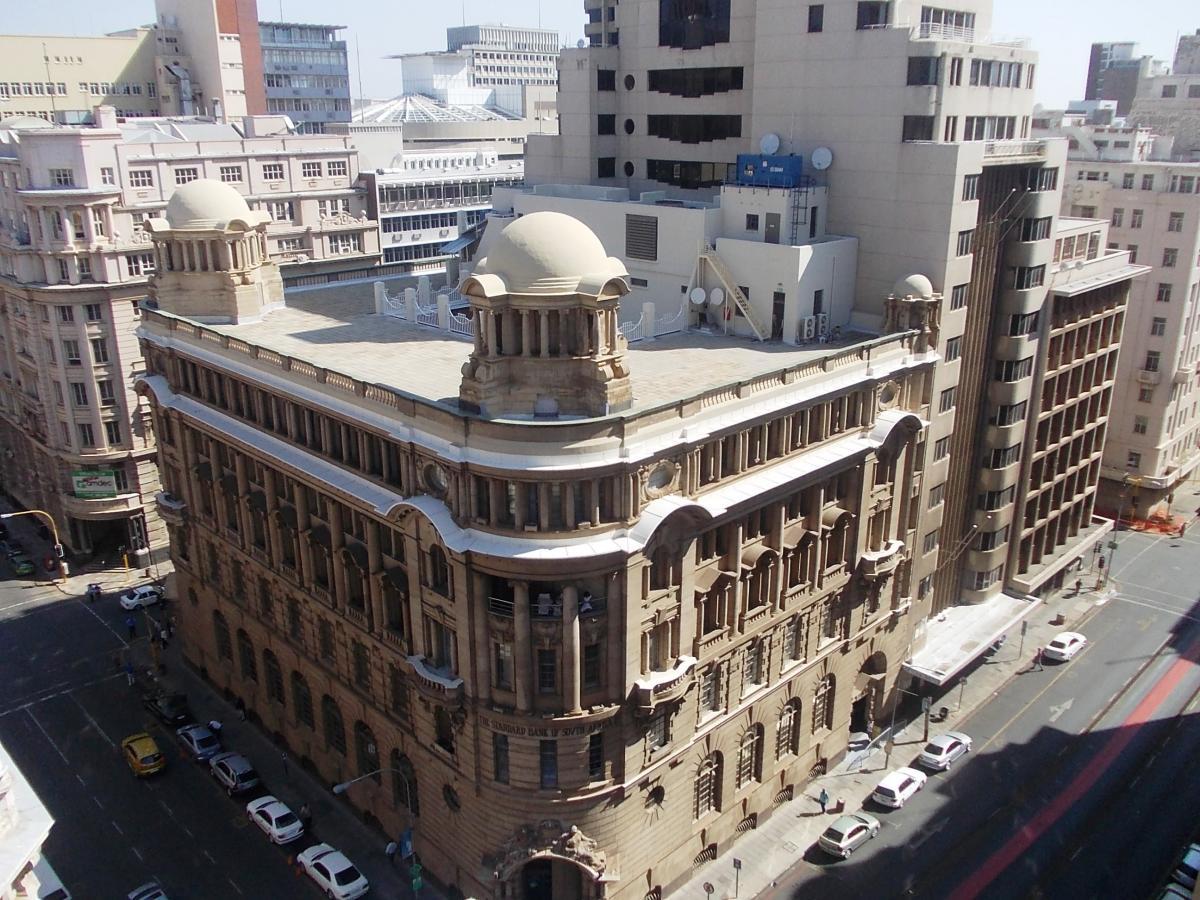 Standard Bank Chambers, on the corner of Harrison and Fox Streets in the old financial district of Johannesburg, was for decades the bank’s biggest branch and, for a time, its head office. Designed by Stucke and Bannister and completed in 1907/8, it is one of Johannesburg’s historical and architectural treasures. Over the years many committees have suggested it should be declared a National Monument / National Heritage Site.

In the late 1970s the building underwent a major internal renovation in order to provide 'improved working environments' and a ‘more flexible use of office areas’. The outside of the building remained virtually unchanged but some important restoration work was done. Below is a brief but very interesting description of the restoration. It appeared in a 1980 edition of the publication 'Planning and Building Developments'.

The exterior of the building is constructed in stonework from a quarry which no longer exists. As the stonework, although basically sound, showed varying degrees of deterioration, the Council for Scientific and Industrial Research was called in by the architects to report on the state of the stonework and to make suggestions regarding its renovation and preservation. Some remedial work had been done to the sandstone in the past and most of the sandstone appeared to be coated with what seemed to be a covering film. The first step was, therefore, to clean down all the existing stonework thoroughly, in order to expose the natural stone thus making possible a detailed assessment of the remedial procedures required.

The plain vertical stonework was found to be in fair condition although slight surface weathering had occurred in places where cracks in the stonework coincided with the natural bedding plane of the stonework. Cornices, window cills and other projecting features were also in fair condition, where they had been capped by metal sheeting or provided with adequate slopes to prevent water ponding. Where water failed to drain away these and other horizontal features deteriorated badly, notably in the domes and other structures at roof level.

Three basic procedures were adopted to reinstate the stonework. Where minor cracks had occurred, the stonework was cut open and patched with a special patching material. Severely decayed stone, usually at cornices and copings, was cut away and replaced with new Ficksburg stone. Areas at the upper roof level were severely decayed and these were replaced with special precast concrete units which colour matched the existing stonework and had weathering characteristics compatible with the existing stone. Badly delaminated and decayed horizontal mouldings and horizontal surfaces were ground away and reprofiled to provide a better run off of rainwater in positions where this could be done without destroying the silhouette profile, which is characteristic of this period.

The stone renovation was a demanding task requiring skills in stone masonry, which today is a dying trade. The majority of the artisans who executed the work were provided by a sub-contractor who combines stone masonry with monumental masonry, thus ensuring the continuation of such skills.