A remarkable album of early 20th century views of Johannesburg 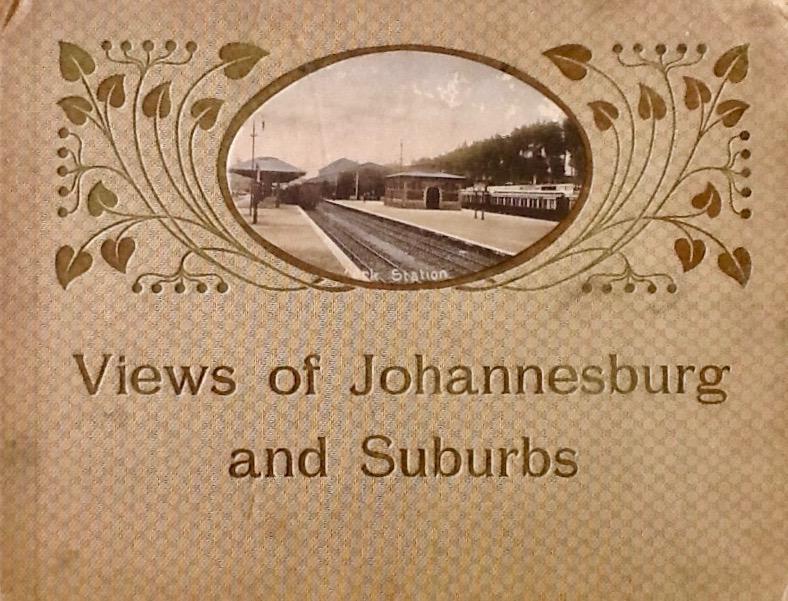 This wonderful album was published by Paul Schaefer and Company of Cape Town, a well-known compiler of souvenir books. The cover photograph in the oval inset shows the original Park Station which came to Johannesburg from the Netherlands in 1896. The station was designed by Jacob Klinkhammer. It was the point of arrival for visitors to Johannesburg in the early 20th century so this image is an appropriate entry portal to the town.

Panoramic view of the two faces of Johannesburg

The date of the album is somewhere during the early 20th century, probably post 1905 and pre-1910. The set of images opens with a foldout page showing panoramic views of the two faces of Johannesburg, the modern town with the focal point of Market Square and the second a view of the Simmer and Jack Mine in Germiston.

Then a view of the Market Square. The square was the economic centre of Johannesburg. This photo shows the wide expanse of the square and the intensity of trading activity in agricultural produce, wholesale food stuffs and cattle. High-rise buildings are beginning to appear around the edges. They were more substantial... 4, 5 or 6 stories in height and expressing permanence with stone and brick displacing the wooden shanties and corrugated iron of the mining camp era. The square was described as the largest in South Africa, at a quarter of a mile long. The offices of the Chamber of Mines faced the substantial Market Buildings. At this date the town hall has not been built. 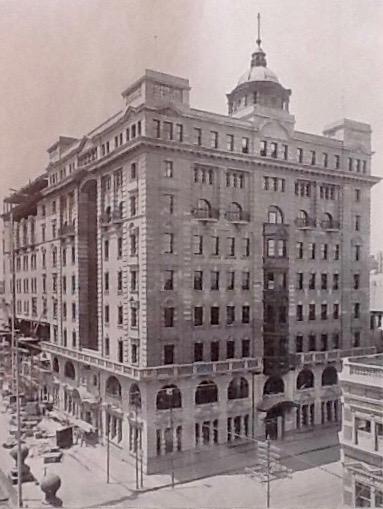 Eckstein's Building or the Third Corner house, located on the corner of Commissioner and Simmonds Streets, was the headquarters of the mining finance group of Hermann Eckstein, Julius Wernher and Alfred Beit. These men epitomized the successful Randlords of the Witwatersrand. The ten-storey building built in 1903/4 still exists today. The architects were Leck and Emley. The building was described by Picton-Seymour as "a monument to the prosperity of the young city of Johannesburg". It was one of the first skyscrapers of the town. An older Corner House was demolished to make way for the new progressive, permanent and sophisticated building. The steel framework was imported from New York. Corner House was an expression of Edwardian Johannesburg. It was occupied by the Corner House Group, perhaps the greatest of the mining finance houses, until 1965. The Fourth Corner House was built in the sixties bounded by Commissioner, Fox and Sauer Streets. 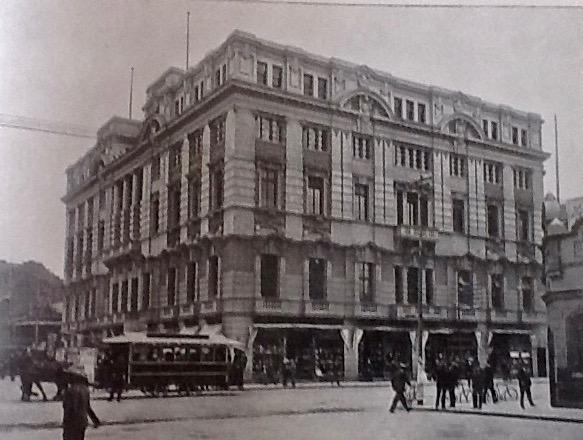 This is the Third Rand Club located at 33-35 Loveday Street. It was built between 1902 and 1904 and the architects were also Leck and Emley. It is regarded by van der Waal as representing a high point in Edwardian architecture with the use of quality materials expressing opulence, city success and a male aura. It was Johannesburg's gentlemen's club in the style of London's Pall Mall. I still recall the days when women were not allowed to enter the club through the grand Loveday Street entrance nor climb the stairs of the main staircase. 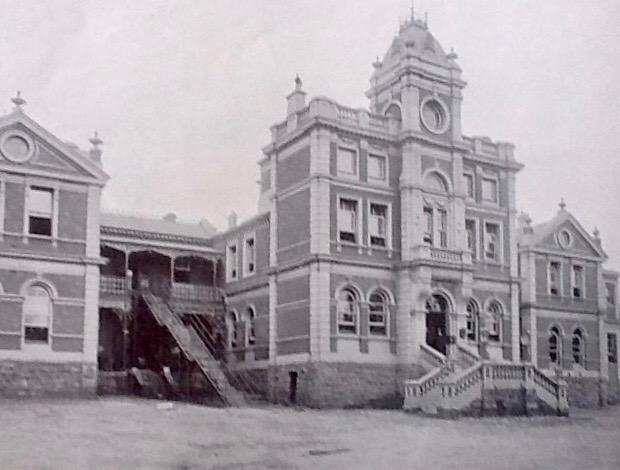 This is Johannesburg's first public hospital. It was designed by the architectural firm Read & McCourt. The corner stone was laid in March 1889 and the hospital opened in 1890. The east wing opened in 1893. Over the years, the Hospital complex came to comprise many different buildings. The hospital gave its name to Hospital Hill, the hill rising above the mining town to the north. Van der Waal describes the style of the building as formal classicist. It was a public facility and hence regarded as a government building. 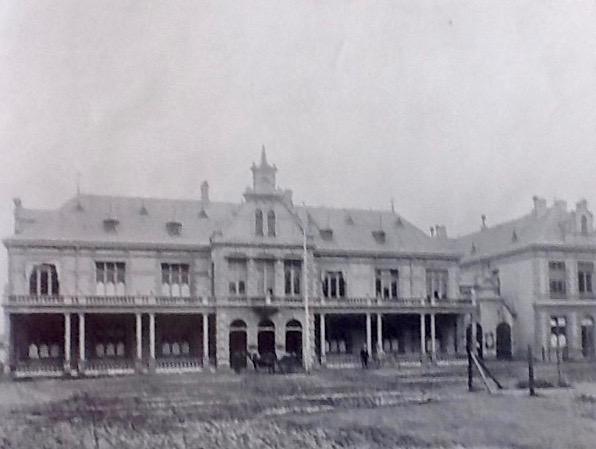 The Court Buildings on Government Square (today's Gandhi Square) were erected between 1890 and 1893 by the the Public Works Department. They were part of the cluster of essential government buildings showing the orderly presence of the Zuid Afrikaansese Republic in the pre-Boer War era (e.g. The Rissik Street Post Office, the Hospital, the Fort, the Police Headquarters on Marshall square, Park Station etc.). Post 1910, under a new administration, the Supreme Court was erected on Von Brandis Square (1910-11). Van der Waal describes the old Court Buildings as having "a more formal appearance with its plastered facade, stope with round columns and central gable". It was the second court house in Johannesburg and was a circuit court (there was at that date no high court in Johannesburg). The Magistrates Court building was completed in 1941. 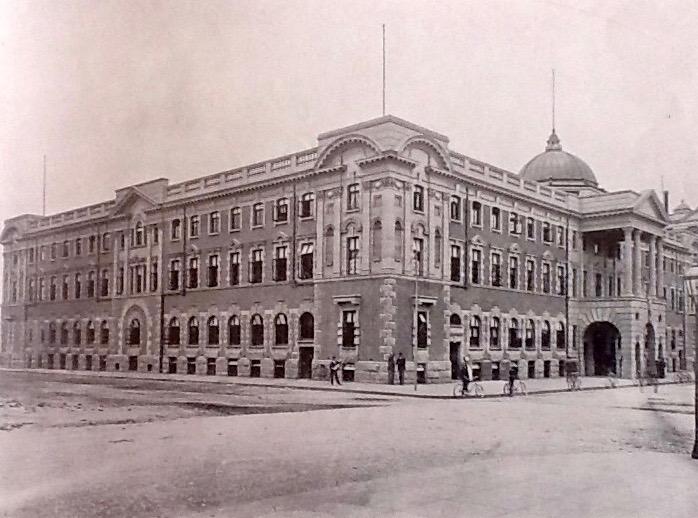 The Third Stock Exchange building located on Hollard Street was designed by Leck and Emley and built between 1902 and 1904. According to van der Waal, it was a classical building of the Edwardian period with a portico, temple facade, arched pediments, cornices and rustic work. It was a huge building filling the block on Hollard Street. It comprised 210 offices and an enormous trading hall with coffered ceiling and a visitors gallery. It too had an imported steel framed structure. The Stock Exchange became the heart of the financial district and Hollard Street became synonymous with the share market and finance capital more broadly. The building was demolished in the late 1950s to clear the site for the construction of the Fourth Johannesburg Stock Exchange which opened in 1961.