Nkosi Mzilikazi and the Ndebele 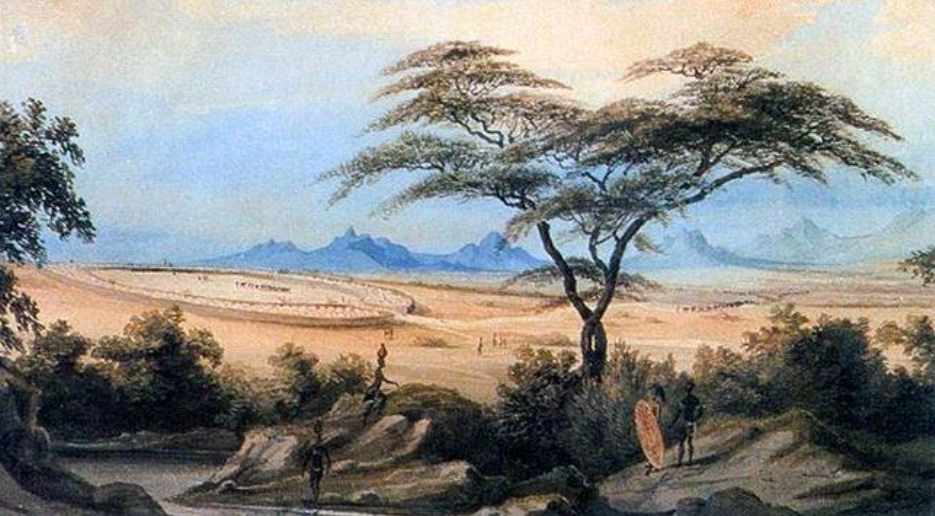 The history of the Ndebele people, also referred to as the Matabele, began with the rise of Mzilikazi (born about 1790) as a leader of one of branches of the Khumalo clan under the Zulu king, Shaka (Rasmussen 1978, p. 10). In 1822, Shaka sent Mzilikazi, with an impi, on a cattle-raiding expedition against the Sotho chief, Ranisi (Sominisi). This expedition was successful, and large numbers of cattle were seized. However, Mzilikazi decided that rather than giving the cattle to Shaka as he should have done, he would keep them and take the opportunity to become an independent leader with his own following. It was necessary, however, for Mzilikazi to take his followers and their cattle as far away as possible from Shaka and his impis for fear of retribution. Mzilikazi knew that the Zulu king would punish the young leader who had rebelled against him. 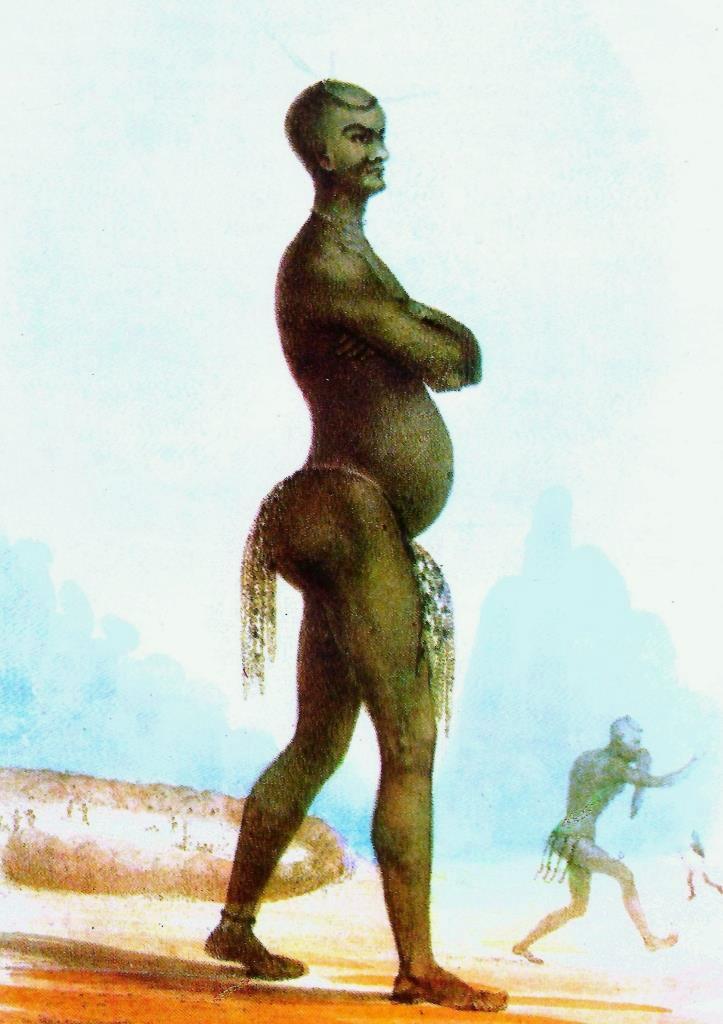 Mzilikazi, painted by English hunter and explorer Captain William Cornwallis Harris in 1836. From Harris 1999 [1844], opposite half title page.

Mzilikazi thus led about 300 of his followers north-west away from Zululand, into what is today Mpumalanga (Rasmussen 1978, p. 26). For the next few years, Mzilikazi led his Ndebele (called the Matabele by their Sotho and Tswana enemies) in warfare against the Pedi (the Northern or Transvaal Sotho) and other communities living on the eastern Highveld. Like the Zulu, Mzilikazi’s Ndebele used short stabbing spears and large cowhide shields against the long throwing spears and smaller H-shaped shields of their opponents, thus giving them significant advantage in battle. The young men and women of the communities that they conquered were incorporated into the Ndebele as warriors, wives and vassals. By 1823, these numbered several thousand, and the growing community settled along the upper reaches of the Vaal River. However, in that region they were subjected to persistent cattle raiding by the Korana, one of the Khoikhoi communities from the south. Having obtained horses and firearms from Dutch frontier settlers, they were formidable opponents for the Ndebele. 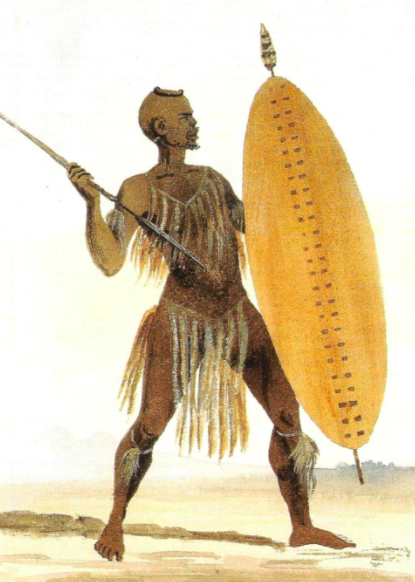 In 1827, to escape these enemies, Mzilikazi moved his people further north, into the region of the Magaliesberg. The Ndebele swept over the pass at Mphane, today called Kommandonek (Rasmussen 1978, p. 59). The first group that they attacked was one of the branches of the Tswana, the Bakwena ba Mogopa. Next to be attacked and defeated were the Bapo, originally an Nguni group who, in the 18th century, had settled among the Tswana around what is today called Wolhuterskop (Carruthers 2014, pp. 221-222). One by one, the Tswana communities of the region were overwhelmed by the invaders, and within two years, Mzilikazi ruled over the entire region of the Magaliesberg, and the Ndebele had established kraals all along the foothills of the mountain range. Some of the Tswana communities fled from the area; others, like the Bafokeng and the Bakgatla, served Mzilikazi as his vassals, and paid tribute in the form of cattle, crops, animal skins, and iron tools (Carruthers 2019, p. 11). Mzilikazi was now the undisputed ruler of the Magaliesberg region.

Like the Tswana, the Ndebele structured their kraals so that there was a large space in the centre where their cattle could be kept securely at night. However, unlike the Tswana, the Ndebele seldom built stone walls around their kraals. Rather, these were laid out according to the traditional Zulu pattern, with circular parallel fences of thickly interwoven branches (Carruthers 2014, p. 223). The beehive-shaped huts were then placed in the space between the two parallel fences. This design formed a very effective barrier to anyone seeking to capture cattle from the Ndebele. Each of these settlements typically contained a few thousand cattle and several hundred people.

Within a few years of their arrival in the Magaliesberg region and the subjugation of the communities there, the Ndebele population had grown to tens of thousands, and there were dozens of Ndebele kraals on the lower slopes of the Magaliesberg. Three of the largest of these – generally known as amakhanda, or military kraals -- also served as residences of Mzilikazi. They were Kungwini, at what is today called Wonderboompoort north of Pretoria, Dinaneni just north of Silkaatsnek, and Hlahlandlela, which was the largest of the settlements. The exact location of Hlahlandlela is uncertain (Carruthers 2019, pp. 10-11). In addition, there were many other Ndebele settlements in the area north of the Magaliesberg between Magatasnek and Wonderboompoort. One of these, near Rustenburg, has been located and surveyed by Dr Julius Pistorius (Pistorius 1997a and Pistorius 1997b). Archaeological evidence also points to a strong military role for this site. This is seen, for example, in the presence of large numbers of whetting stones that were used for sharpening spears ( Pistorius 1997b, p. 52).

Despite having moved significantly further north, the Ndebele were still subjected to cattle raiding by the Korana and their Griqua allies. Like the Korana, the Griqua, with their Khoikhoi and Dutch ancestry, were skilled in the military use of horses and firearms. One of the most significant raiding expeditions against Mzilikazi took place in 1831, under a Griqua commander by the name of Gert Hooyman. The expedition was initially successful, and thousands of cattle were captured. However, Hooyman made the mistake of allowing his force to rest at the Hex River, close to the site of the present-day Bospoort Dam. He should have kept his men moving until they had travelled back over Olifantsnek pass to the relative safety of the area south of the Magaliesberg. Hooyman and his force were attacked by the Ndebele in the middle of the night, and very few of them escaped alive (Carruthers 2014, p. 226).

Despite living more than 500km from the Zulu, by then under their new king Dingane, Mzilikazi was constantly aware of the danger of attack from this quarter. In the winter of 1832, Dingane sent his impis on the long march to the Magaliesberg, and the Zulu launched their offensive on the Ndebele (Carruthers 2019, p.19). Kungwini at Wonderboompoort was destroyed without Ndebele resistance, and the Zulu force then marched westwards towards Dinaneni, capturing Ndebele cattle as they went along. At Dinaneni (north of Silkaatsnek) the Ndebele made their stand. After a fierce battle, the Zulu invasion was halted by the strength of the Ndebele, and they turned around and headed back towards Zululand. Dinaneni, however, was destroyed, and like Kungwini, was never reoccupied.

Not only were the Ndebele being harassed by enemies from the south (the Korana and Griqua), and from the east (the Zulu), but their movement further north was hampered by the presence of the cattle-killing tsetse fly in that direction (Rasmussen 1978, p. 61). Mzilikazi thus took the decision to move westwards and he established new settlements at Mosega (about 12km south of present-day Zeerust), and Gabeni (about 60km due north of present-day Groot Marico). As we shall see in a future episode in this series, these were to be the locations of major battles with the Voortrekkers, who arrived in 1837. The outcomes of these battles were to play a major role in the future destiny of Mzilikazi and his Ndebele people.