Here is one of those books to look out for and add to one’s Africana collection. It was published in 1988 by AD. Donker, the Dutch South African publisher who produced quality books that fell into the Africana category.

This book was recently advertised by Christian Rare Books as "a popular reference book of people who did things in South Africa whose names are on the tip of our tongue; whose names we should remember.” Yes, but only if you happen to have been around in the eighties and were interested in art, history and current affairs of the period. These were the newsmakers, the famous and the infamous or the historical characters going back to earlier centuries who were thought to matter in the history being taught at schools in the late 20th century.

Published at a moment in time when South Africa was changing, becoming more enlightened and with the end of apartheid in sight, this biographical survey of the achievers and movers of South African society, past and present was significant because it tried to look to the future and be balanced and politically correct in including white and black South Africans in the line up of historical and artistic figures. I purchased my copy at the local Hospice shop and was immediately fascinated by its period feel. I was amazed that within 30 years it has dated considerably (the give away is that there is no entry for Jacob Zuma but Cyril Ramaphosa and Nelson Mandela were given entries).

How speedily this book has passed into the historically collectable category. It was heavily geared towards the  political, literary and artistic worlds. Writers, actors and politicians who mattered then feature prominently. All were personalities, stars, literary figures, sportsmen and women of note.

A biographical dictionary is a strange book because it is a compilation that involves choice – it can never be totally comprehensive. Someone is bound to be left out and most politicians pass their sell-by date as soon as they die or are out of office. The trick is to transform yourself from politician to statesman of note or a historical figure. This is what makes a book such as this appealing - how did the author decide on who to include and who to drop. It is this element of choice that makes a dictionary of biography both dated and timeless; the date of publication dates it almost immediately.  I seldom write in my books but in this case I immediately picked up a pen and began to mark up the dates of death of the personalities who had passed on.

Mona de Beer was a journalist and writer who was married to Zach de Beer, one of the founders of the Progressive Federal Party (predecessor to the DA). No wonder she chose to include an entry on her husband and feature his photo on the dust wrapper collage along with Charles Bowyer Adderley (of Cape Town street name fame but the man who fought against the Cape becoming a penal colony in 1849 – did you know that?), Albert Luthuli (Nobel Peace Prize winner and president of the ANC banned for his beliefs and writing), Uys Krige (Afrikaans writer popular in the fifties and sixties who translated Shakespeare into Afrikaans), Paul Kruger (president of the Zuid Afrikaanse Republic), JM Coetzee (he at least is still alive and the winner of the Nobel prize for literature not just the Booker Prize in 1983), Elizabeth Eybers (Afrikaans poet), Moshweshwe (I did not know this is the correct spelling of Moshesh the founder of the Sotho state), Jan Celliers (founder of Die Volkstem and Afrikaans journalist of note). Actors, singers, dancers, journalists, fashion designers, cricketers don’t actually age into the permanently memorable but they give a nice flavour of an era. We sigh: “I remember Mercedes Molina or Graeme Pollock or Phyllis Spira or Anneline Kriel or Taubie Kushlick.

Who did what in South Africa - book cover.png 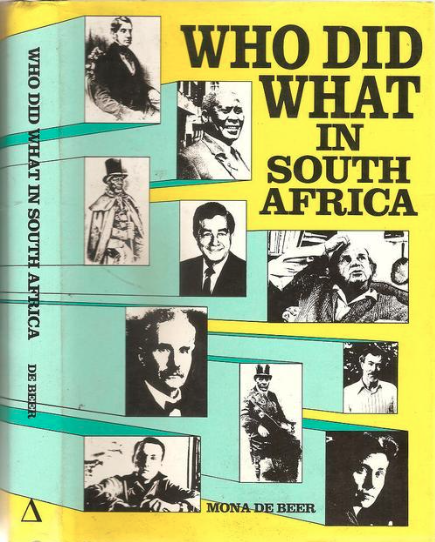 There are 1200 entries and it is quite an art to write up a thumbnail life story of a prominent person in a three hundred words. I think the author has done well on almost all the entries, although there is no acknowledgement to the SA Dictionary of National Biography (the great five volume standard reference) or Eric Rosenthal's Dictionary of Biography (surely the model of a one volume effort). There are some errors as to dates of birth and a few missing dates of birth, but that is acceptable and understandable in a pre-google era; I imagine this book must have been done with card entries. Sources and bibliography matter and this is a big weakness in this volume.

Have fun reading about those whose feats, accomplishments and talents have enriched the nation. Educate and entertain yourself by perusing the entries and perhaps ask as I did ‘Is he or she still alive or have they shed the mortal coil?’ (Mona and Zach de Beer have both passed on).

The book was published with the expressed intention of a second edition following. In fact there was a second edition published in 1995 and yes, I think I am in line to purchase it as well. These sorts of books all add to the reference library and have not yet been displaced by Wikipedia or Google.