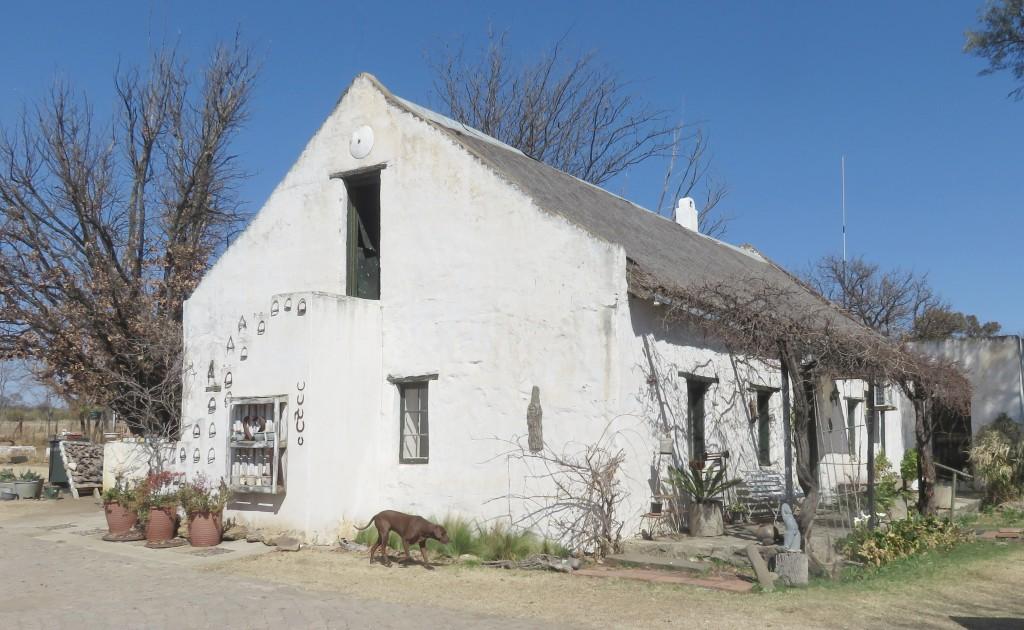 On the farm Leeuwpoort near Heilbron in the Northern Freestate are two residential houses built for the Weilbach family, both Provincial Heritage sites.

The older of the two is a typical farm house of its time. It is difficult to establish exactly when it was constructed and by whom. There is one piece of information stating that it was built by Engelbrecht, the occupier of the farm before Pistorius and Weilbach. That would put the date into the 1860s. In another source, the year 1850 is mentioned. In yet another, it is reported that the farm house was built by Carl August Pistorius for his daughter, Catharina Johanna, and son in law, JF Weilbach, when they got married in 1875 (Pistorius is the man who sold Maccauvlei to Sammy Marks for an, at the time, unheard of sum of £15 500.  Click here for more details). 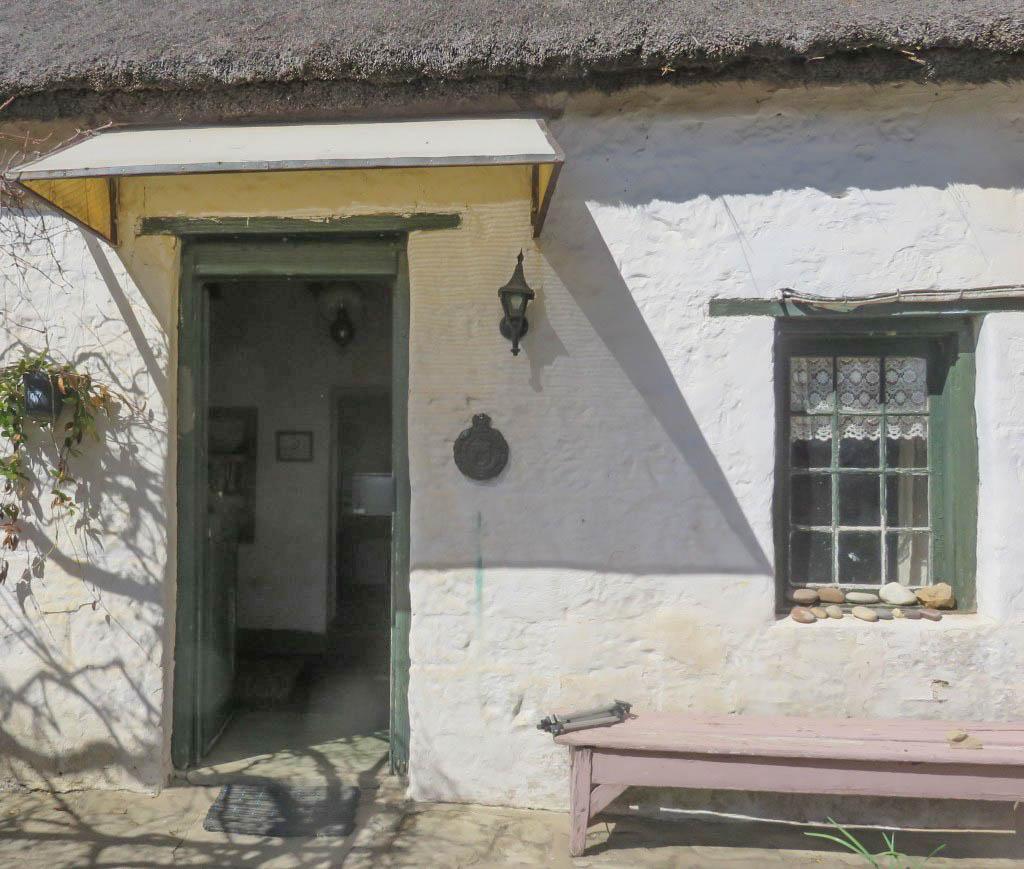 The house is a typical farm house of those days. The brickwork, I have to assume, is made from mud bricks. The only exposed surface is on the inside of the gable, but that is made up of burned bricks dating from a later repair job. In 1943 it was reported that the building was in ruin and was later restored. The outside walls are remarkably thick, between 400 and 500mm. Window frames, lintels above the windows and door frames are made from wood. The ceiling is made up of wooden slats on top of yellow wood beams. The roof is thatched. 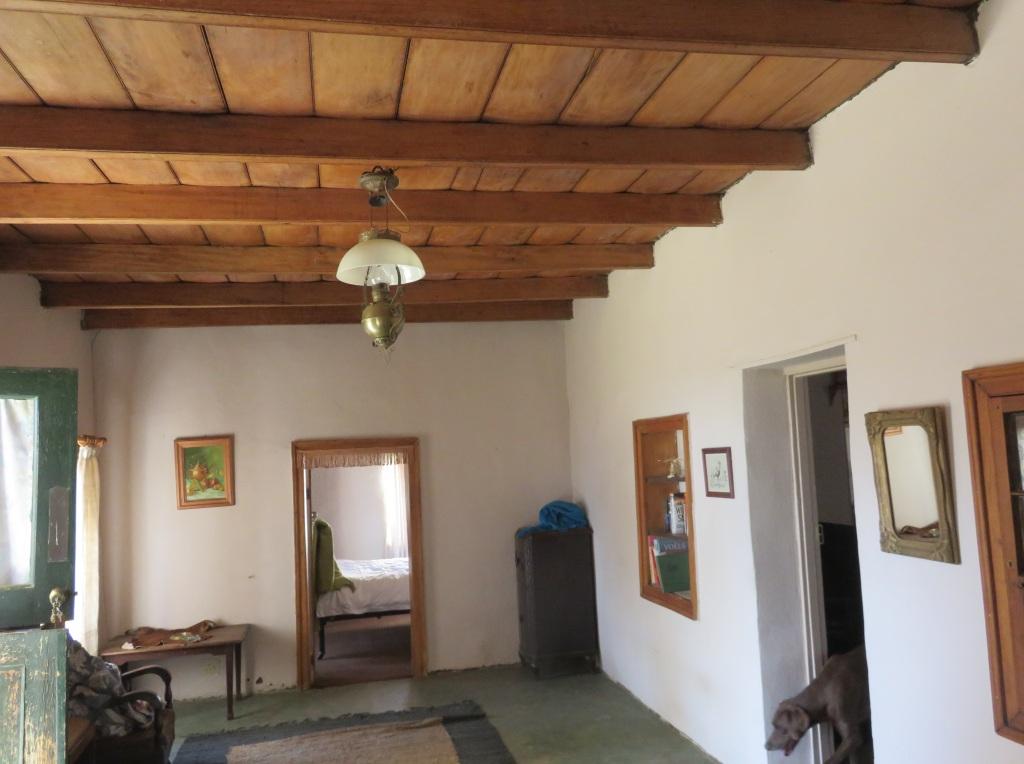 What I would call the main house was built for JF Weilbach in 1894 by a Scottish builder named Sharpe. It is unknown whether an architect was involved here. It is very likely that the builder and the architect were the same. The style of building reminds me of some of the structures I have seen in Scotland. 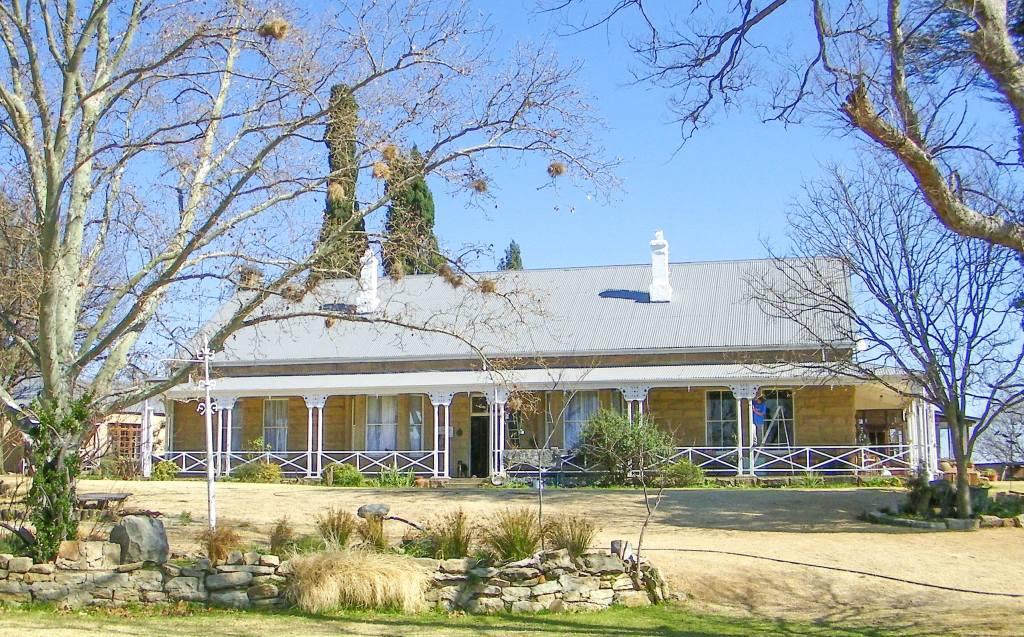 Building material is natural dressed stone (sand stone) from a quarry nearby. The stone masons were Italian. Something that strikes me about the interior is the extremely high ceiling, estimated at 4m. 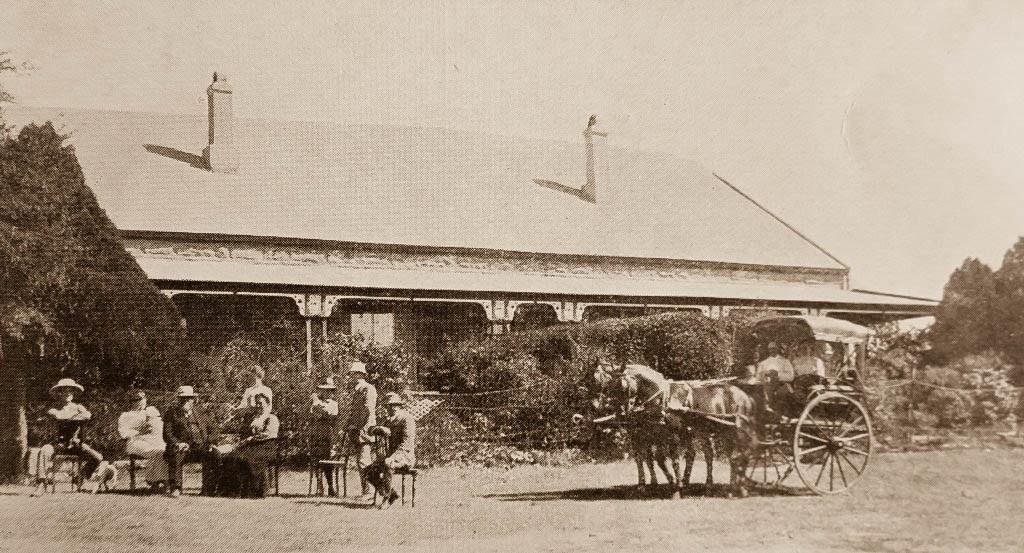 Old photo of the main house (The Orange Free State - its pastoral, agricultural and industrial resources)

JF Weilbach was a successful farmer. The house he had built, as well as the Dorps huis (see further down) are witness to that. The farm house gets a special mention in the book The Orange Free State - its pastoral, agricultural and industrial resources, compiled by Somerset Playne, where it says: ‘The homestead at Leeuwpoort is a charming retreat nestling in a profusion of ornamental trees, and, as it is built on a commanding position of the estate, the views from the windows are exceedingly pleasing‘. The monochrome picture above is from this book and shows the house and the family in the early 1900s. The ‘old ‘ man in the middle of the group would be JF Weilbach with his wife, Kato, to the left. 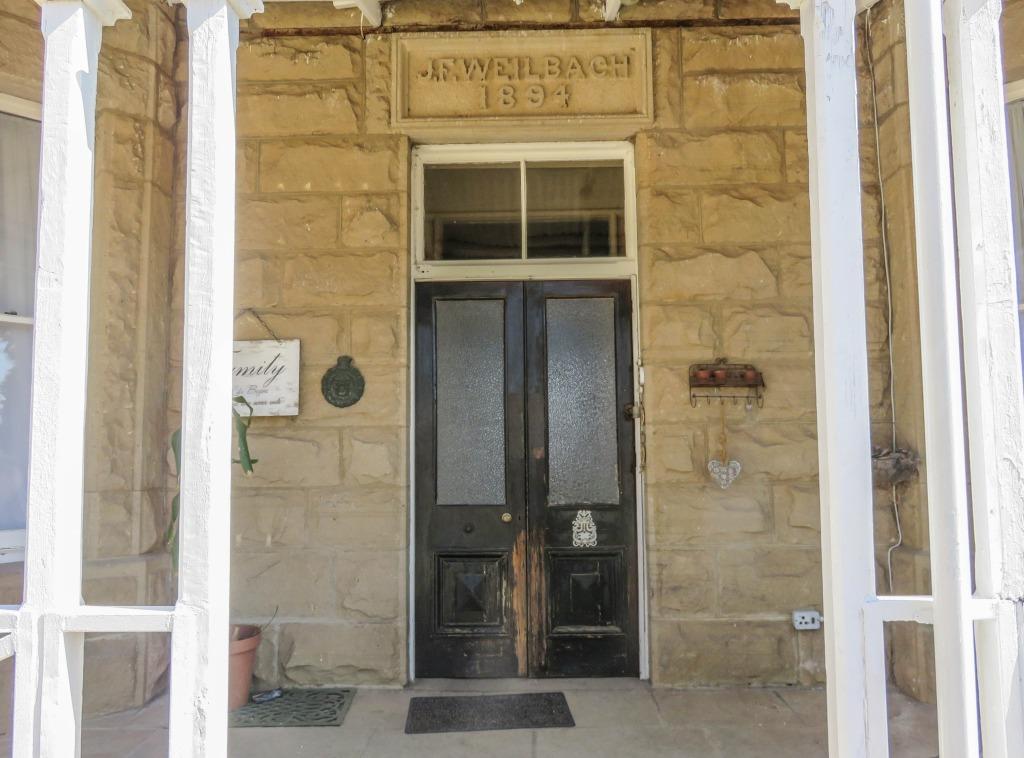 Both houses escaped destruction during the Boer War. That was because Colonel Delzeal (spelling not certain), the commanding officer in Heilbron, on learning that Weilbach's wife (Catharina or short Kato) and 12 children lived in the house, gave instructions that they and their property should not be harmed. 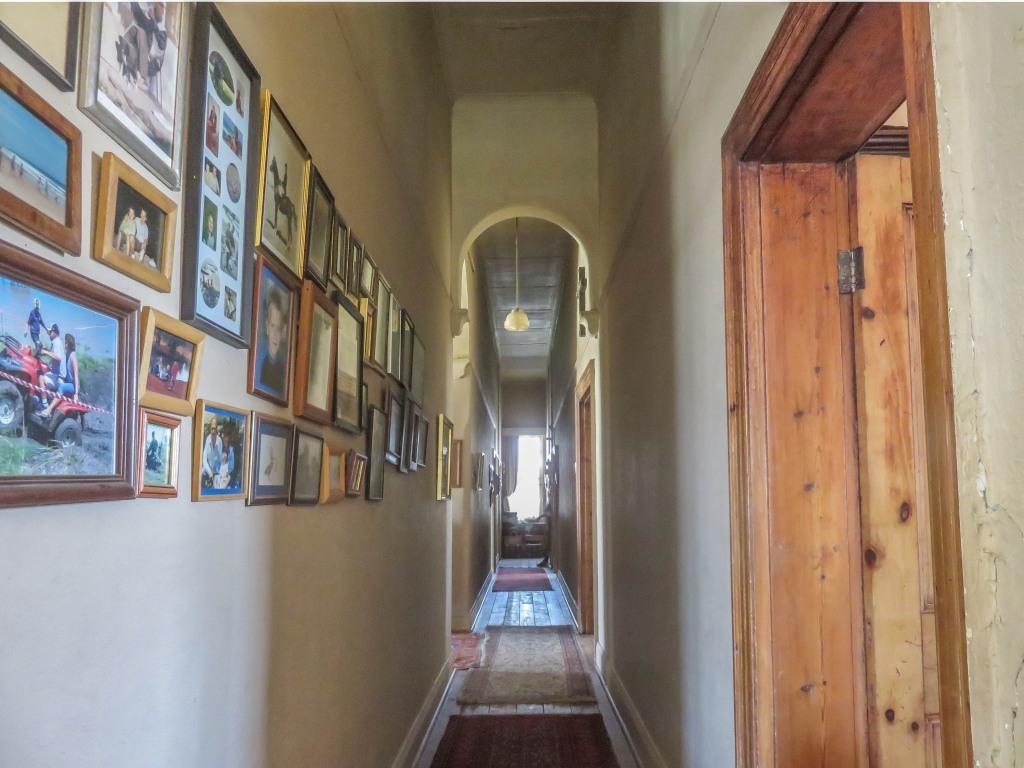 Additional information I have gathered is that Kato and the children did not stay throughout the war. Things eventually become too dangerous and they moved into town (the farm house was being shot at by mistake). The building was then used by the British military as an office. What is amazing is that when Kato returned home after the war, nothing was missing and the property was clean and well looked after. 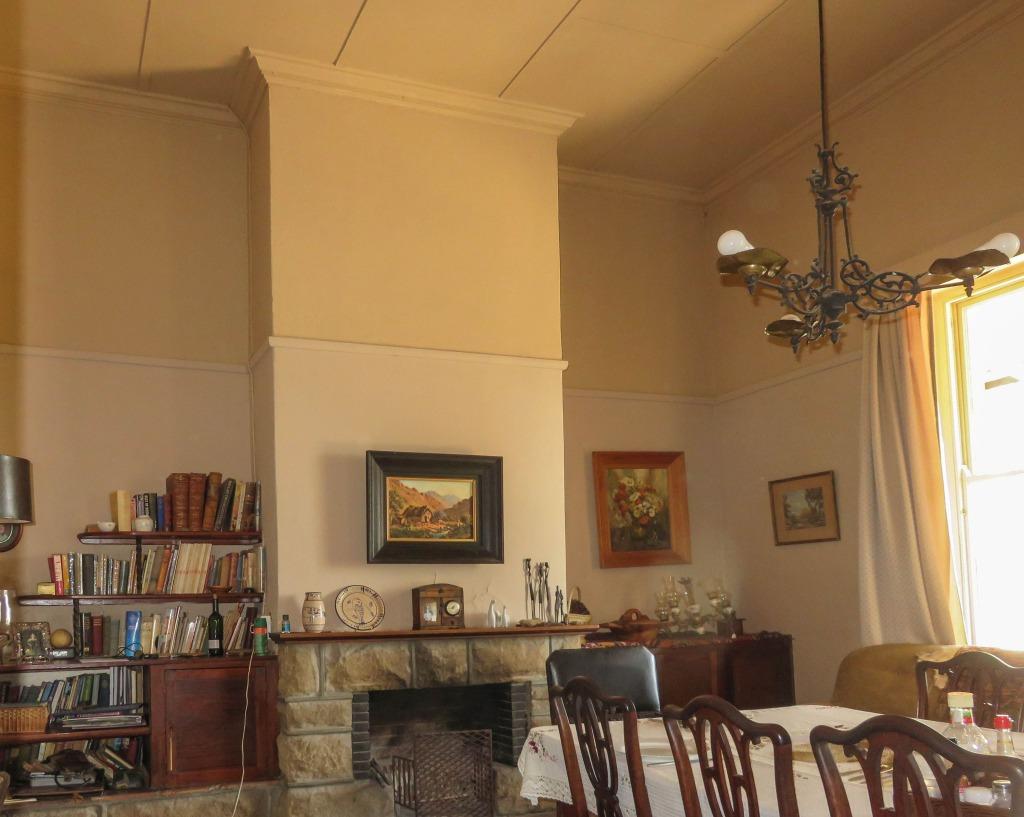 To complete this article,  it is important to mention another house built for the Weilbachs by the same builder: the ‘Dorps huis‘ or town house. It was erected in Heilbron at the corner of Heil and Pierce street. It was common for wealthy farmers to have a house in town, mainly used for overnight accommodation when attending ‘nagmaal‘, holy communion. 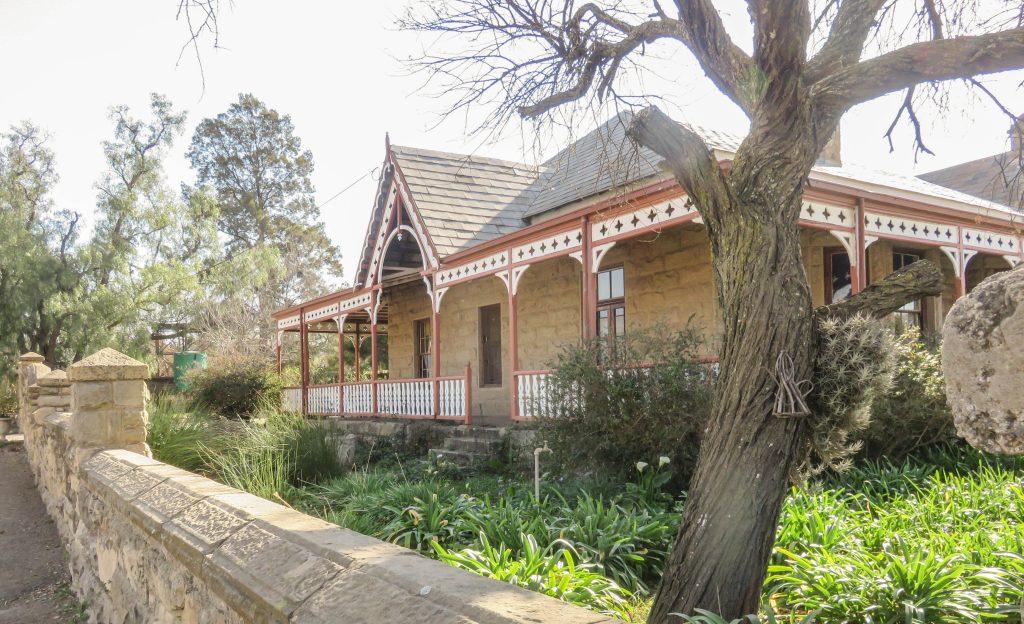 I would like to thank the present owners of the buildings and the farm, Wouter and Wilna Weilbach for giving me access to their property, for sharing some of the history and for their wonderful hospitality.