Perfect nuisance and as mad as a hatter - Rudolf Gottfried Steger, Pretoria based photographer from 1898-1919 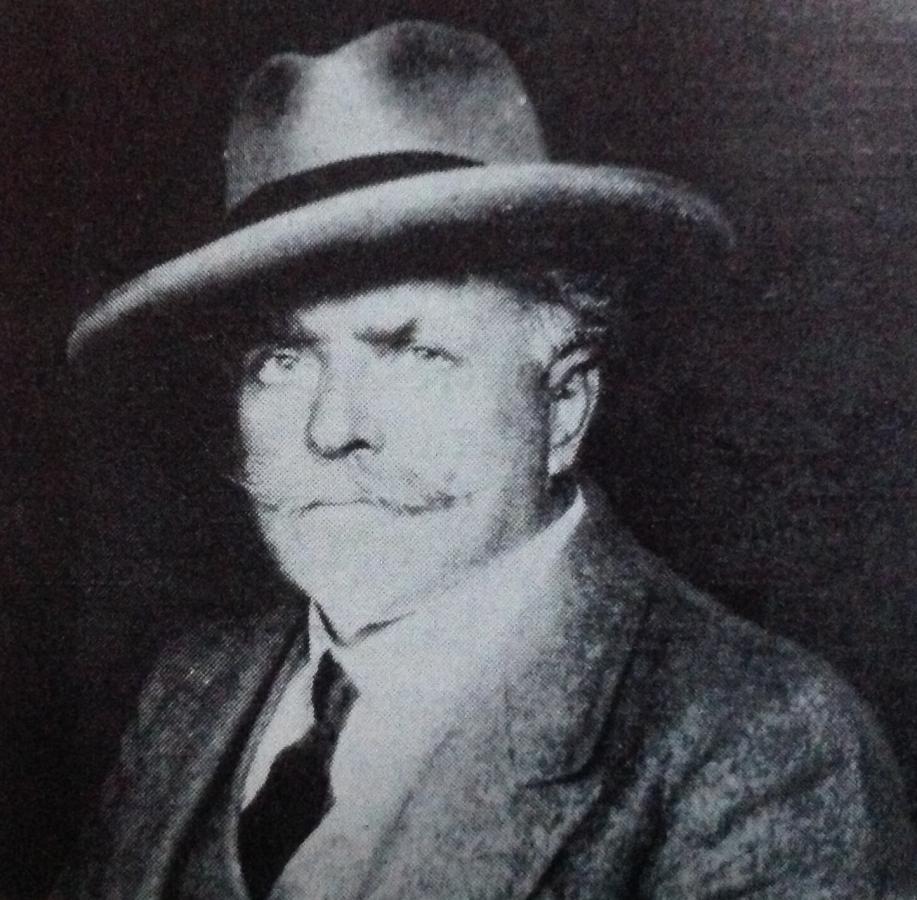 Rudolf Gottfried Steger was born in Germany on 11 March 1871. He left his country of birth aged 10 to attend school in Switzerland and then went on to complete four years of religious studies in Rome. Whilst in Switzerland, he also trained as a medical assistant at the Red Cross in Geneva – a skill that would later come in handy.

Steger arrived in South Africa during 1894 and became a naturalised burger (citizen) whilst based in Paarl during 1896. He established his first studio in Pretoria during 1898 aged 27.

During his 21-year photographic activity in Pretoria, Steger seems to have been based at five different studios, namely Schoeman, Koch, Pretorius, 201 Church and 333 Market Streets. Steger also reproduced many old photographs previously taken of Pretoria.

Nachtmaal on the Church Square at Pretoria during 1893 via Carol Hardijzer.jpg 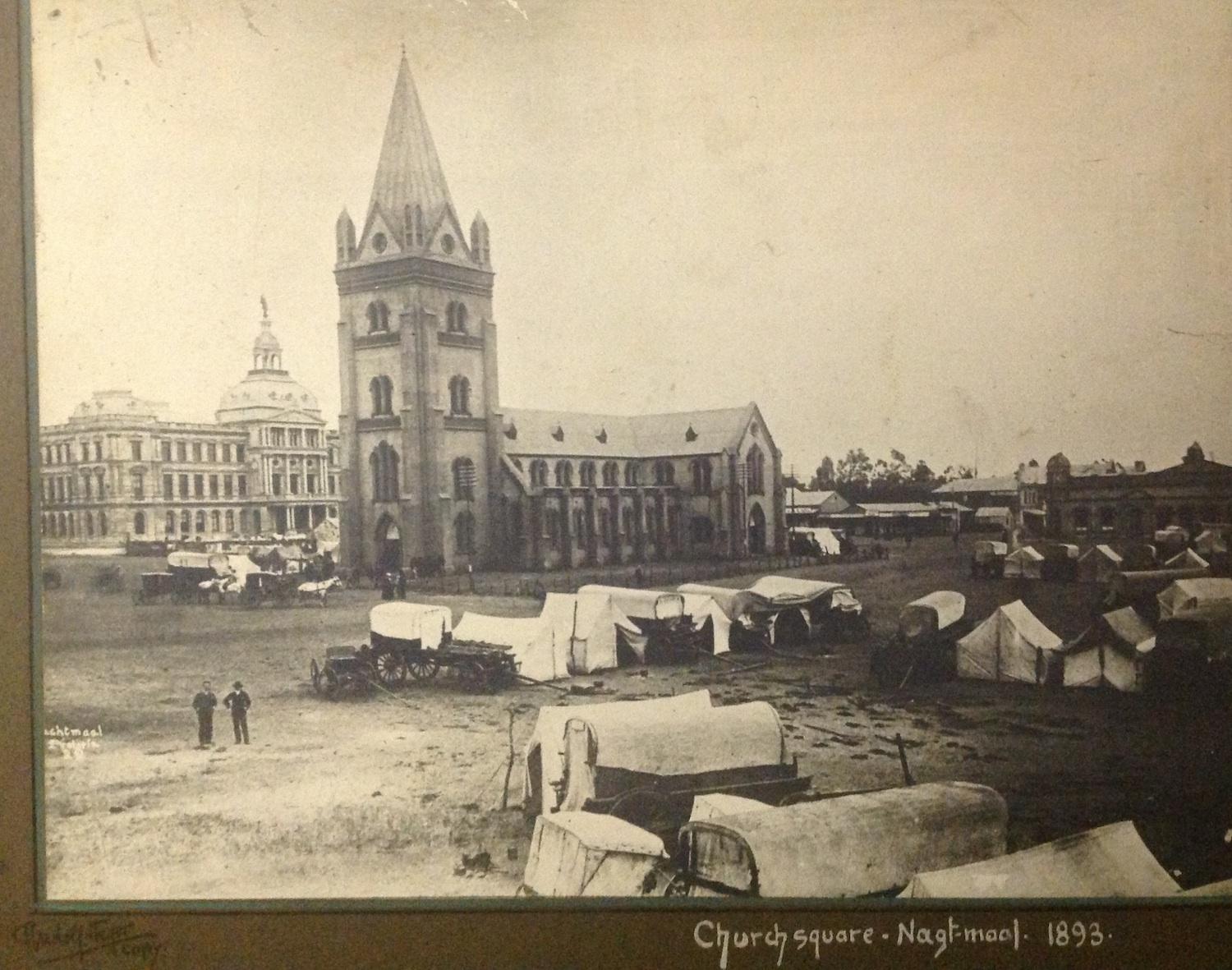 Nachtmaal on the Church Square at Pretoria during 1893. An example of a reproduced photograph by Steger. It is not clear who the initial photographer was – It would not have been Steger.

Steger advertised that his speciality was Platinotypes. Platinotypes or platinum printing is a process of producing photographic prints on platinum based paper.

Example of the advertising that Steger applied on  the back of his cabinet cards via Carol Hardijzer.jpg 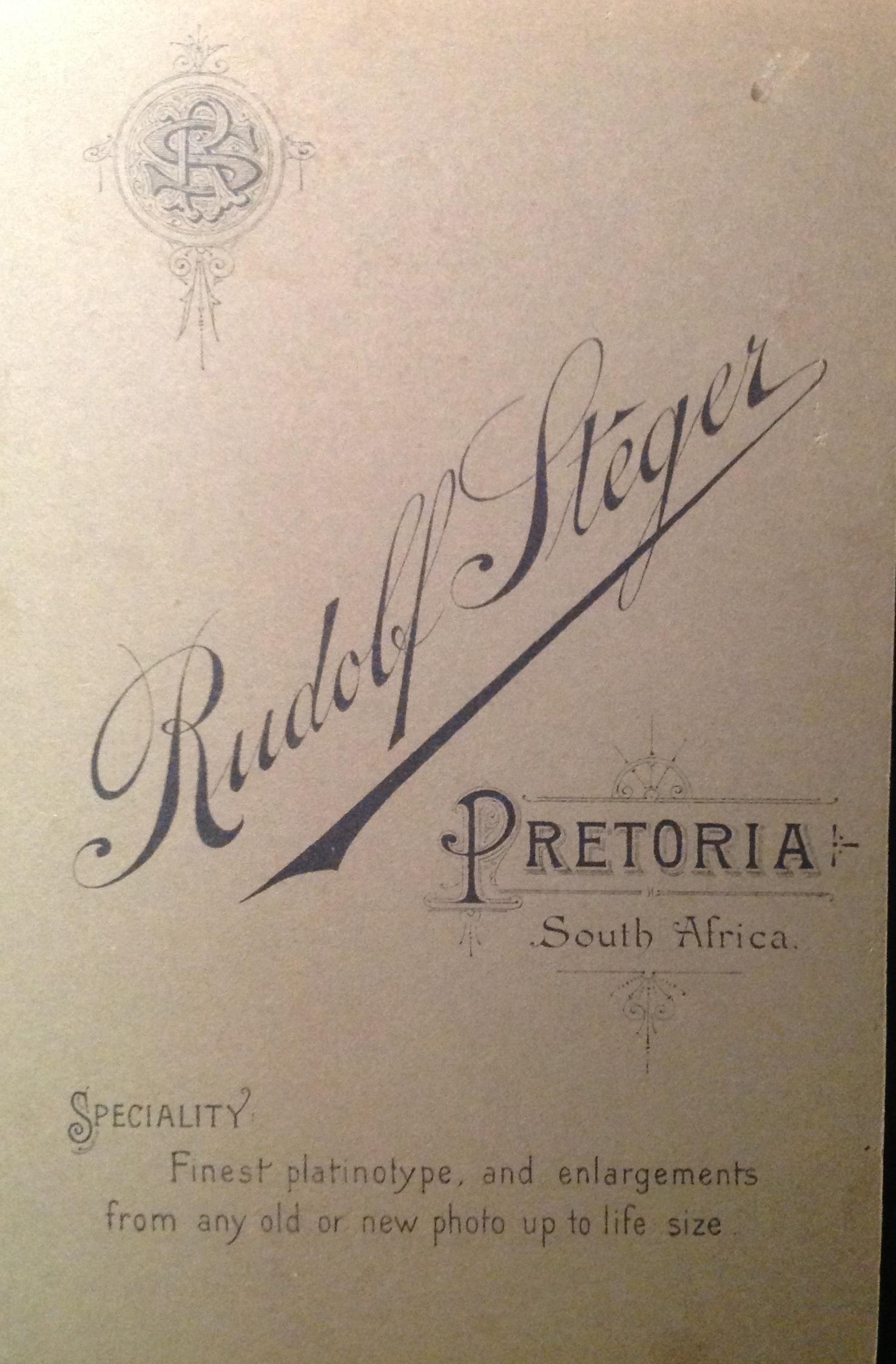 Example of the advertising that Steger applied on the back of his cabinet cards. These cards, on which the photograph was pasted on the front of the card, would have been ordered in bulk from printers in England or France.

During October 1900, a Pretoria citizen, one Besaans, claimed £84.9.3 from Steger for the rental of a photographic studio based in Schoeman Street (next to the waterworks office). It is assumed that this was the first of five studios used by Steger.

The following year, Frank Percy Crighton declared that he was Steger’s agent in the Transvaal and that Steger had departed for Germany. Crighton added that Steger left no other furniture, photographic apparatus, cameras etc. other than that leased to RCE Nissen in the Transvaal. He valued the items left with Nissen between £250 and £300.

Nissen in turn declared that he took over the whole of Steger’s photographic apparatus, and other material during October 1900. He paid Steger £11 for the use of other furniture and apparatus plus £5 per month thereafter. Nissen also paid £50 for Steger’s good will as well as the use of Steger’s negatives and show cases. Photographers taking over each other’s previous glass based photographic negatives was not an uncommon practice at the time.

Nissen referred to the fact that Steger, clearly single at the time, left some furniture in his bedroom but that he did not consider them worth more than £10. Nissen offered to buy Steger’s furniture, but Steger refused this offer. Nissen declared that the total value of items left with him by Steger did not amount to more than £500. 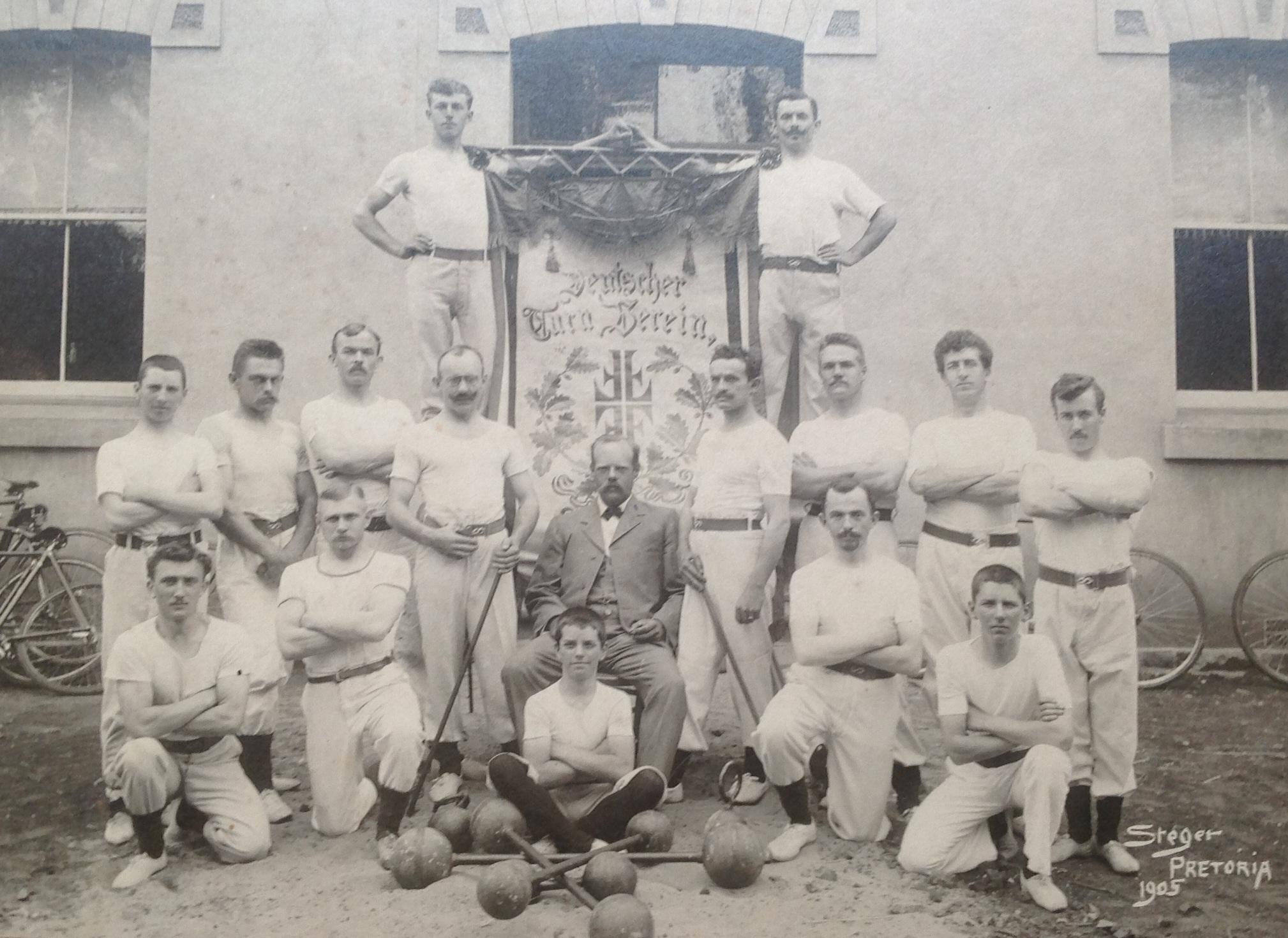 1905 large format photograph by Steger. Pretoria based German gymnastics team. The gentleman in the middle is Mr. Thiel. Second row (standing), second from the left is Mr. Jaeckel (a locksmith) and sixth from left is Mr. Herman.

Nederlandsche Bank in Pretoria as photographed by Steger around 1905 via Carol Hardijzer.jpg 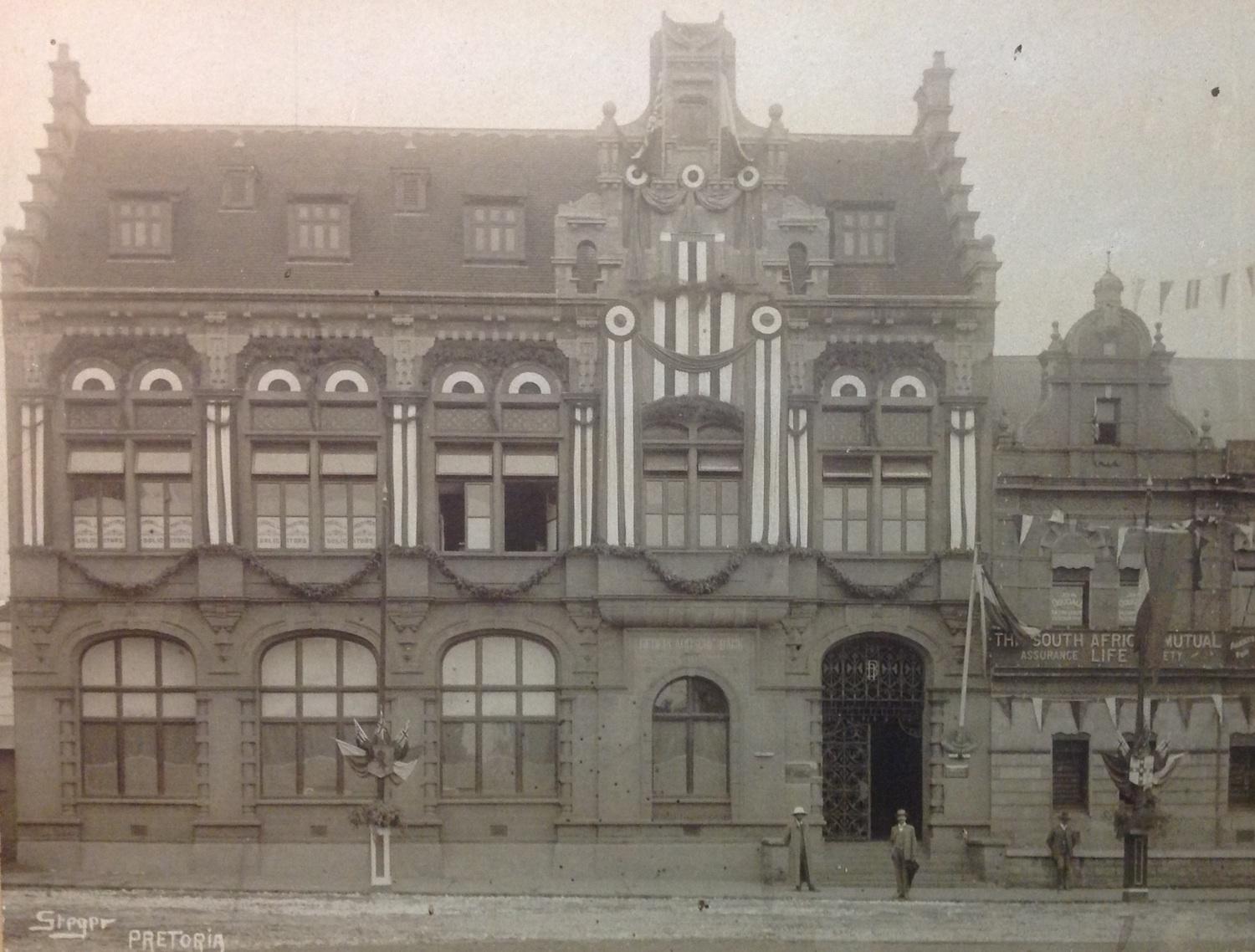 Nederlandsche Bank in Church Square Pretoria photographed by Steger around 1905

It is recorded that Steger joined the Red Cross during the Anglo-Boer War and claimed to have nursed, as well as buried, hundreds of Boer and English soldiers. He maintained that he was present during the Elandslaagte, Ladysmith, Colenso and Spioenkop conflicts (where he also took photographs). In letters written during 1916, Steger claimed to have been wounded 5 times during the Anglo-Boer War. Steger seemingly was also a journalist for some English, German and Italian publications during the war.

Back in South Africa, Steger married Pretorian Wanda Wilhelmina Schubardt (born in Fauresmith), an adopted child to the couple Paul Maré (a Soutpansberg Volksraad member) on 11 October 1911. This suggests that he was a bachelor until the age of 40. Archival documents indicate that Steger and Wanda were “caught” in Wanda’s bedroom by Wanda’s mother after which the mother insisted they get married. Little did the mother know…

Records suggest that Steger was a solid citizen until around 1911, thereafter his storyline indicates a distinct change in behaviour.

On one occasion, he was thrown into the pond on Church Square because of seditious speeches. On another occasion, he was hit with a brick on the nose in Market Street (near where he resided), opposite the defence headquarters, for expressing generalist views on the Empire and negative sentiments on the Union.

Unusual playful pose by unknown group of men circa 1905 via Carol Hardijzer.jpg 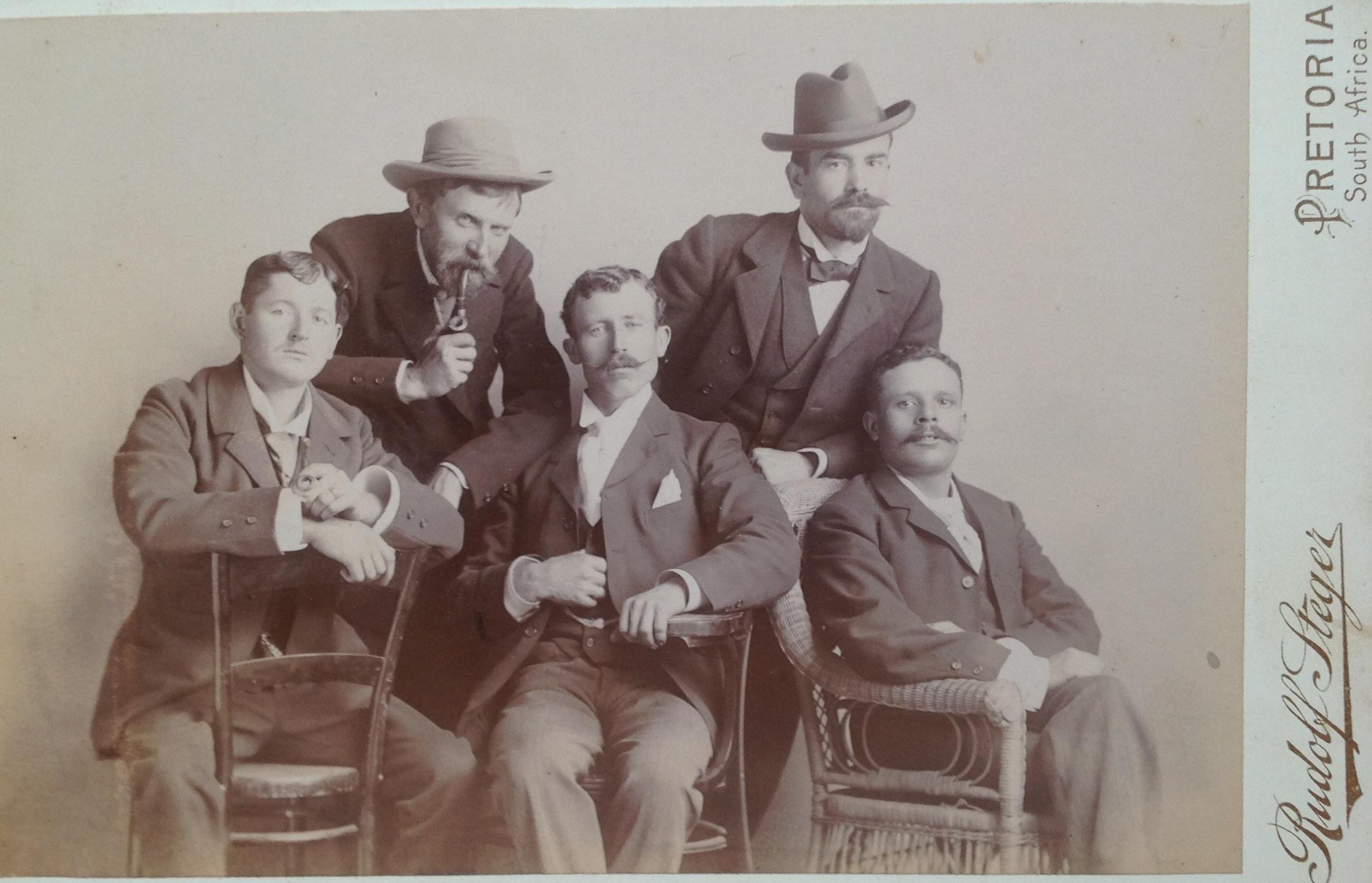 Cabinet format photograph – Circa 1905. Unusual playful pose by an unknown group of men 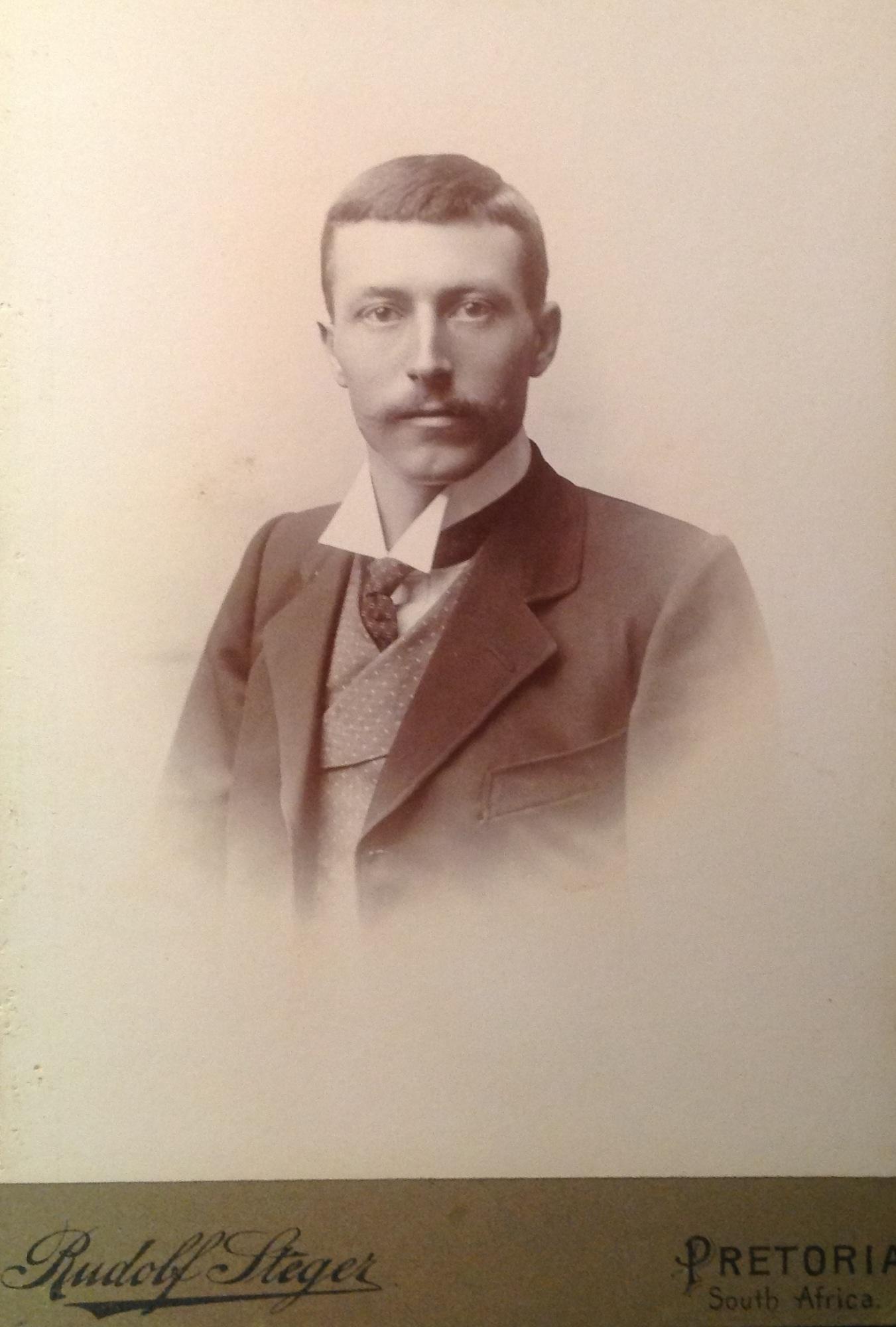 During October 1914, Steger was ordered by the Magistrate not to leave his house between 20h00 and 06h00. Nor was he allowed to enter any bar or public areas. Steger was further informed that disobeying this order would lead to his immediate arrest and imprisonment. As a counterargument Steger stated that he was assisting his wife to nurse her father who was lying “hopelessly in bed with liver cancer“ and that he should be allowed to fetch ice from the railway bar as well as attend either the Market or Grand Hotel restaurants as his wife does not cook for him.

In an affidavit submitted by J. Burger during November 1915 (son to General Schalk Burger) allegations were made that Steger’s conduct since the outbreak of the First World War had been consistently reprehensible and that he was a danger to public welfare and himself. He had been frequently assaulted due to his outrageous behaviour. He was further described as a “perfect nuisance to the public and his wife”.

The magistrate accordingly requested for Steger to be interned resulting in Steger being recorded as the first Pretoria based German to be interned. This seems to have been an unusual step, in that he was interned at Fort Napier during December 1915 due to him being a danger to public welfare and not due to his German ties or him being declared an enemy subject.

Whilst interned, Steger wrote multiple letters to the authorities requesting his release. These letters provide rich information about him as a person and his history.

In the letters he states, amongst other:

Whilst interned, Steger attempted to cut his throat with a penknife (March 1916). Two months later he was admitted to the Natal mental hospital – this seems to be his first incarceration due to mental illness.

In many of his letters to the authorities, Steger kept on referring to his wife as “my dearest little wife” in a rather condescending manner. This same “dearest little wife” Wanda, a piano teacher, also applied to the government for his release. Steger was released on parole on 10 Nov 1916.

Things did not get any better after his release.

Cabinet Card format photograph by Steger of what seems to be an actress circa 1899 via Carol Hardijzer.jpg 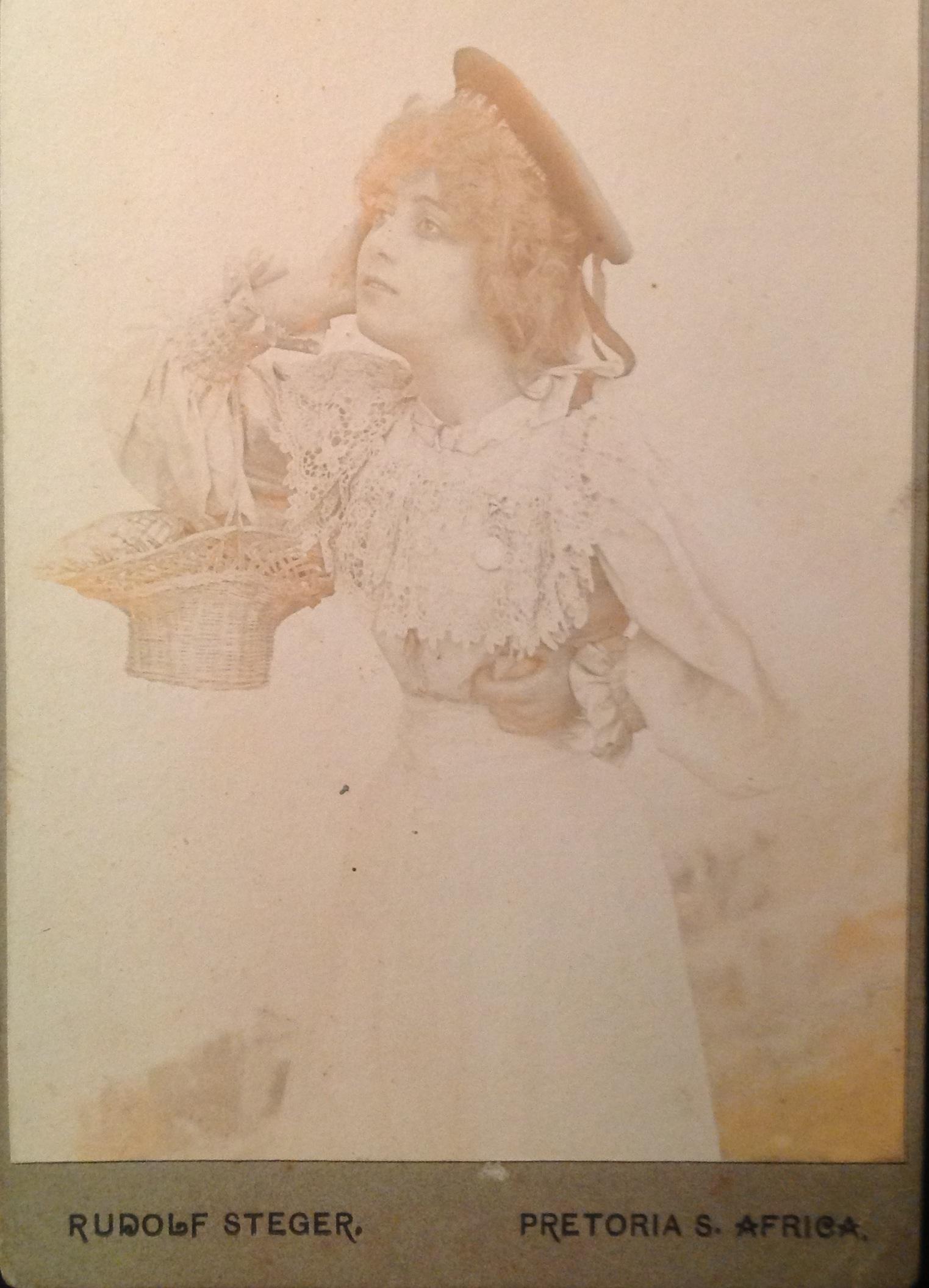 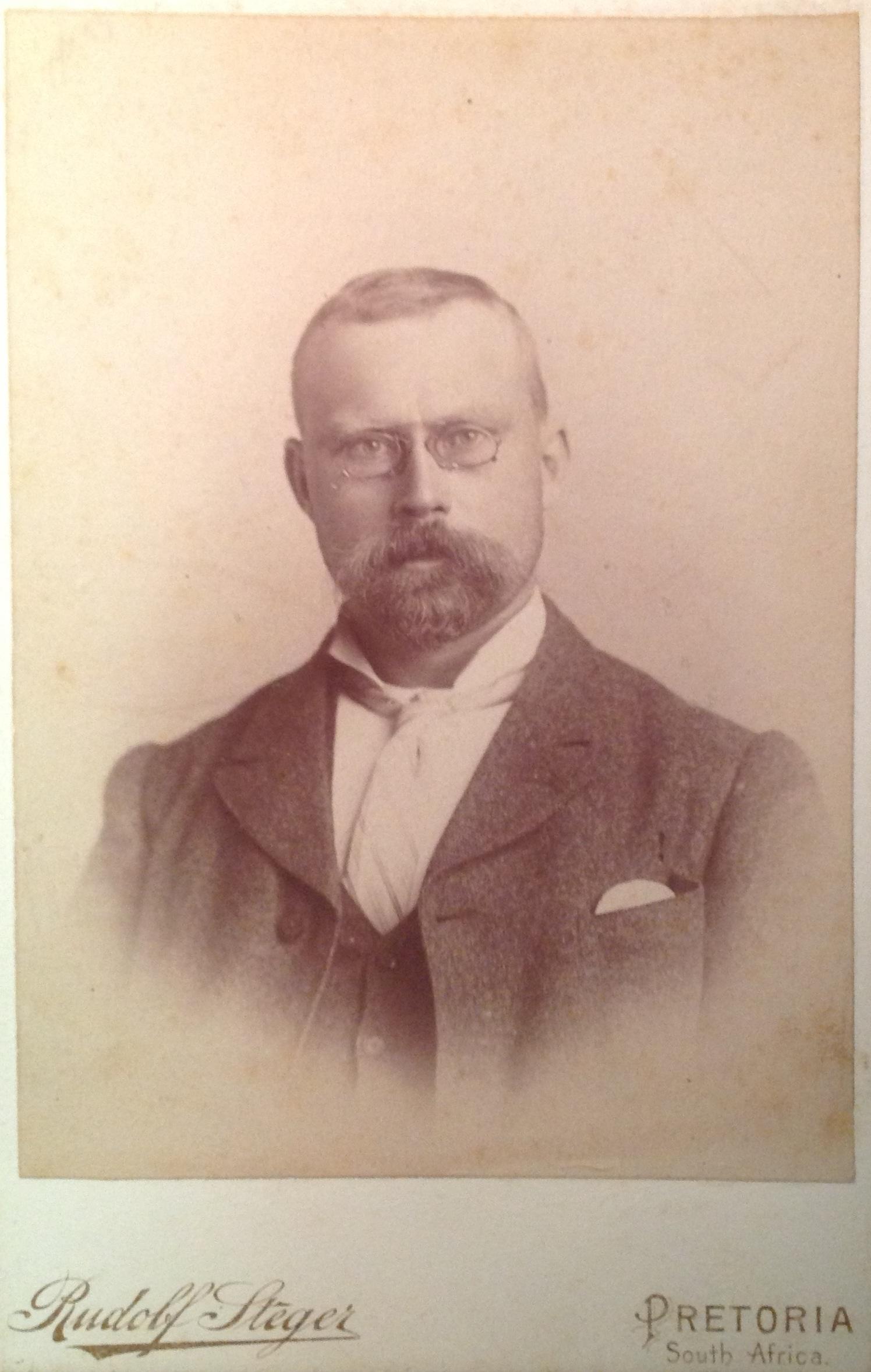 During February 1917, Steger directed a written plea to the South African government that naturalised German citizens could not be held responsible for German submarines doing their duty in Cape waters. In the same letter, English editors were urged to stop issuing articles enticing disturbance of peace and open violence against the German nationals.

At one point, Steger applied for his shot-gun to be released to him – the response to this application is: “The man is frequently as mad as a hatter”. From this it is assumed that the shot-gun was not released.

A judicial separation request submitted during 1918 states: “Ever since date of marriage, Steger has continually been addicted to habits of drunkenness and failed to maintain his wife and has repeatedly threatened her since August 1914 (by using abusive and obscene language), accusing her of unchastity and immorality and that it has become impossible to cohabit with him due to this”.

Post this separation request, Steger entered the Pretoria mental asylum for a short period and was released during January 1919.

The Pretoria court granted a divorce on 2 April 1919 after allegations that he committed adultery with a customer during October 1918. His retaliation and defence around this allegation makes for fascinating reading. In letters (which were submitted to court) he claimed to love his wife with the “greatest jealousy”. Steger further declared that he was an honourable man who studied to become a priest, only later to suggest that if Wanda was a better wife that none of this would have happened.

Although still active as a photographer around 1919, there clearly was a decline in his photographic productivity post 1910. Most of the images included in this article date from well before 1910.

Cabinet Card format photograph by Steger of man in uniform circa 1900 via Carol Hardijzer.jpg 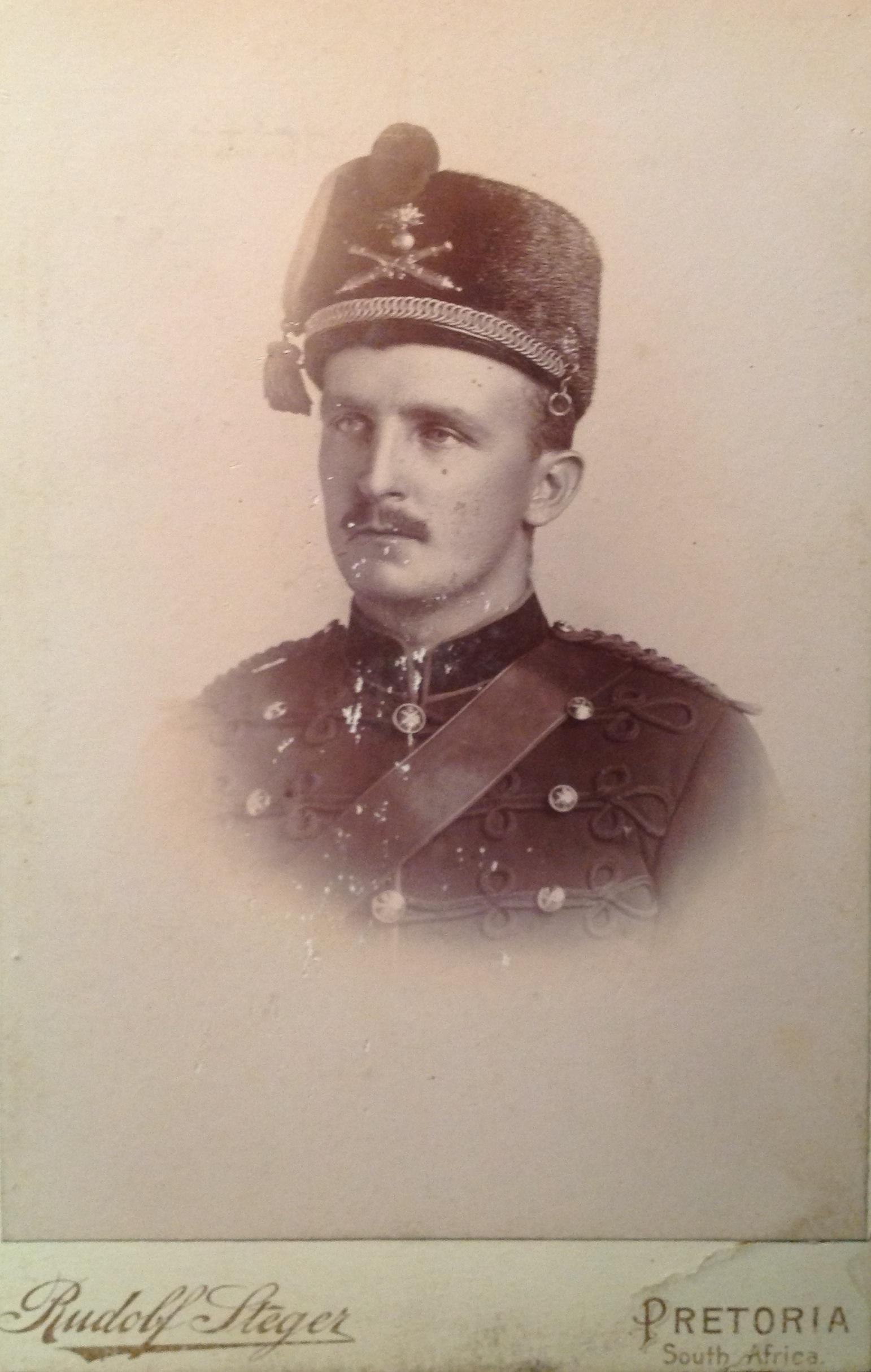 Steger certainly had good intentions after the Anglo-Boer War. He directed a petition to King George to return 9 bronze art pieces to Pretoria taken by the British. He also wanted to commemorate the historical re-internment of President Kruger in a dignified manner by capturing an image for prosperity. This he achieved by photographing the 10-year-old Louie Helena (Lulu) Noome admiring van Wouw’s working model of the beloved President. This image was published in a postcard format.

In June 1926 Steger entered the Pretoria mental hospital again only to be discharged some 11 months later (April 1927).

During November 1929, aged 58, he voluntarily entered the hospital – seemingly for the last time. After 14 years of mental institutionalisation, Steger passed away in Pretoria during 1943 aged 72. One report states that he was diagnosed as suffering from manic depression and psychosis which contributed to his talkative nature and believing that everyone was up against him. 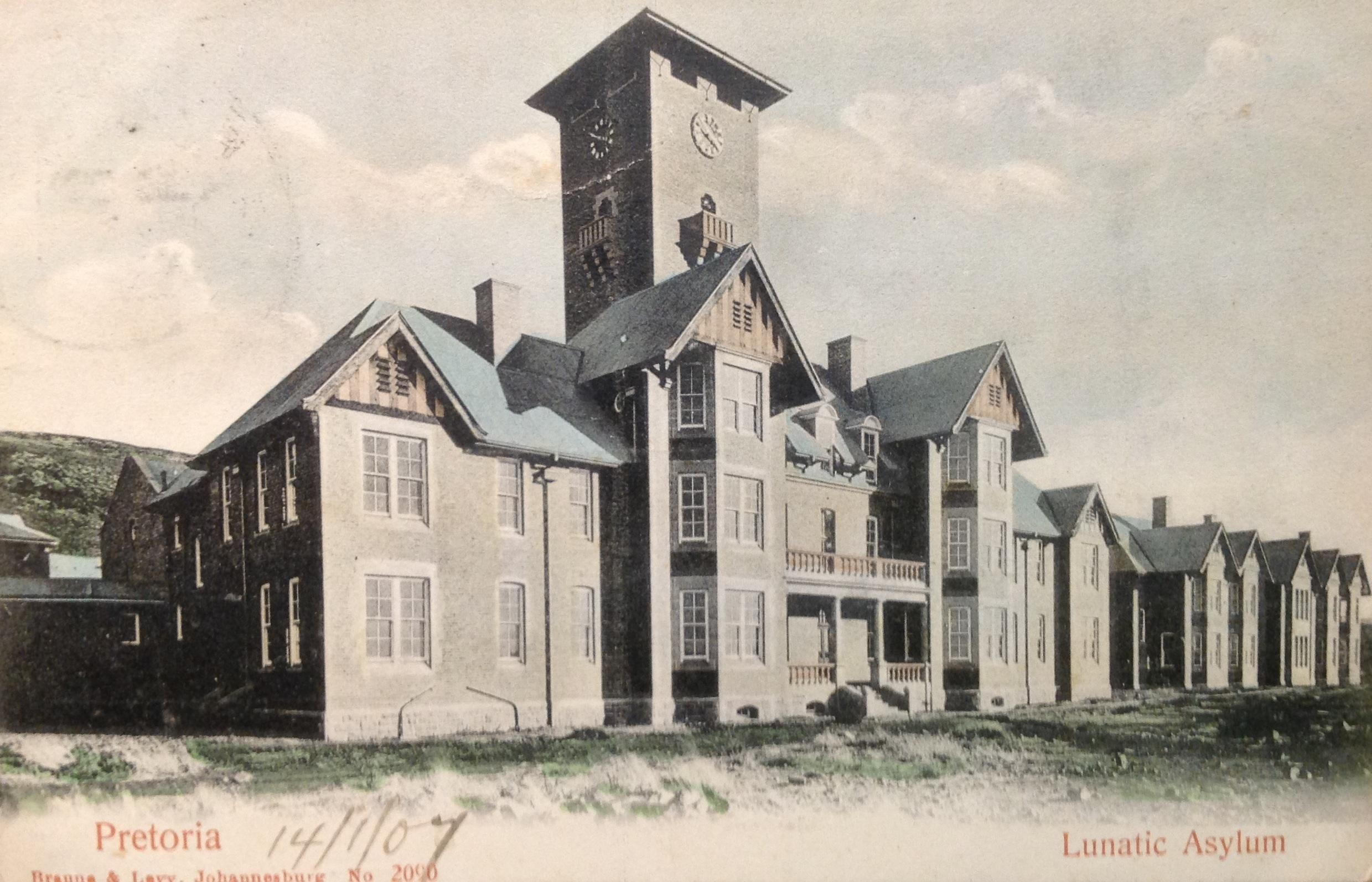 Pretoria mental asylum. Published in postcard format dated January 1907. This is the institution to which Steger was a regular visitor and where he passed away during 1943.

Considering that Steger’s mental health deteriorated rapidly post 1910, the burning question is: Was his regular institutionalisation required due to a hereditary, genetical disposition or did the attempt on his life during 1915, during which his skull was fractured, result in some brain damage?

All the images included in this article, except for the photograph of Steger himself which was reproduced from the 1955 centenary year publication, form part of the Hardijzer photographic research collection.