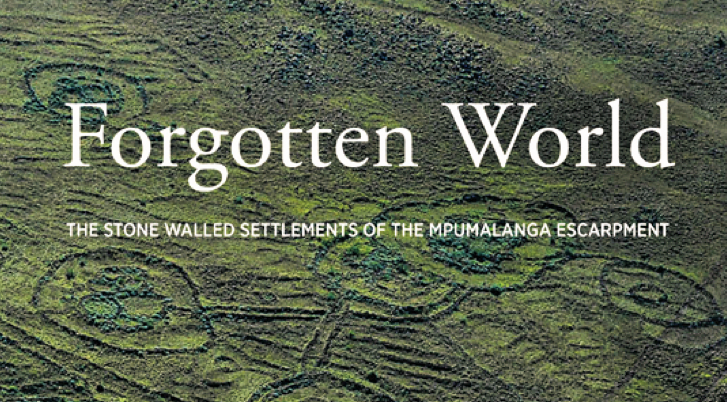 Wits University Press has given us permission to publish an extract from the landmark new book Forgotten World - The Stone Walled Settlements of the Mpumalanga Escarpment by Peter Delius, Tim Maggs and Alex Schoeman. This research begins to answer some of the key questions behind 'one of the most extraordinary archaeological and historical phenomena in southern Africa'.

Conflicting Readings of the Rocks

If you drive through Mpumalanga – perhaps on your way to Nelspruit or the Kruger National Park – and look carefully out at the land, you could see something remarkable. Once you leave the vast expanses of the highveld you descend into the rolling hills and open valleys of the escarpment. The changing seasonal hues of the mountain slopes are dotted with clusters of evergreen trees and darkly forested kloofs. If you keep a close eye on the landscape flashing by you will see fragments – large and small – of building in stone, near the sides of the road and further away on the hills above you and the valleys below. Once your curiosity is pricked you may find that wherever you look you will see sections of stone walling breaking the grass cover, and kilometre after kilometre of stone ridging traversing the hillsides. If you were to fly over the area in a small plane you would be amazed by the endless stone circles, set in bewildering mazes and linked by long stone passages, that cover the landscape below. In some places the coverage is quite sparse and intermittent but in others it is dense, continuous and intricate. If you study the views provided by Google Earth and focus on the ghostly circles that cover the landscape you may get a sense of the extent of the heartland of this world, which stretched from Ohrigstad to Carolina and connected over 10 000 square kilometres of the Mpumalanga escarpment into a complex web of stone-walled structures.

Some of the Bokoni structures visible at Verlorenkloof - Mpumalanga Heritage.png 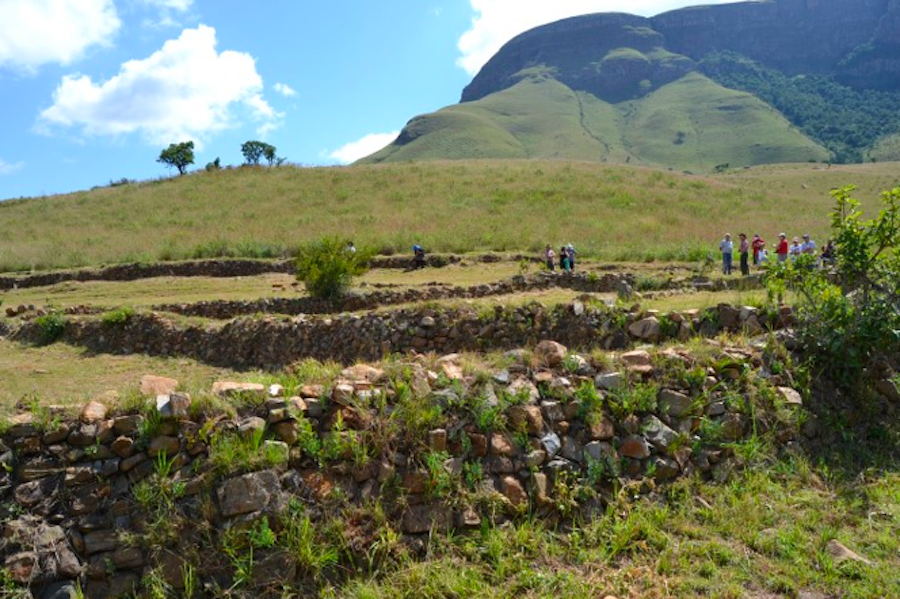 Although travellers may have wondered what these structures represent, few will have known – which is remarkable because they were looking at elements of one of the most extraordinary archaeological and historical phenomena in southern Africa. But it is also understandable, because these structures have remained the exclusive preserve of a small band of scholars and a somewhat wider, but still restricted, coterie of amateur interpreters. Not one of the structures enjoys official recognition as a heritage site. One of South Africa’s most extensive and remarkable legacies of the past is little known by the public and largely ignored by heritage authorities.

In recent decades there has been a buzz of speculation about the nature and history of these sites. It has resulted in a spate of books (often self-published), websites, and even a bistro and bookshop in Waterval Boven where curious tourists and seasoned acolytes of the esoteric mingle. This hubbub has sometimes reached a volume which has almost drowned out other explanatory voices.

The best known and most substantial of the exotic explanations has been offered by Cyril Hromník. He has long maintained that most of the significant innovations and social systems in Africa are the result of Indian influences – a perspective which has led him to argue that the Mpumalanga stone-walled sites are Hindu temples and that the Indian Forgotten World settlers who worshipped in them lived in nearby shelters or caves. They interacted with local San people and gave rise to the Quena (KhoeKhoe), who continued to live in the area until they were displaced by African farming communities in the last millennium. His response to excavations of the stonewalled sites – which have yielded substantial amounts of clearly African material culture such as ceramics and the remains of dakha (mud and clay) houses – is that they were the work of the BaPedi, a Quena-black mixture, and a degraded version of the earlier noble BaPedi/pirir. He further claims that the first Bantu speakers came to Mpumalanga as slaves of the Indian or Quena gold traders and that the BaPedi were the descendants of mixing between the Indian traders and these slaves, who acquired their technological knowledge of metalworking from their Indian lineage but were not as culturally advanced in it their Indian ancestors. Gold and metalworking form another important part of Hromník’s argument. According to him, Indians introduced metalworking to southern Africa some time before AD 1200 or 1300.

The exotic explanations of the Mpumalanga stone-walled sites also stress that they date from ancient and biblical times, and most subsequent exotic accounts take their lead from Hromnik’s work though they often provide their own twist to the tale. A good example of this tendency is the recently self-published book Adam’s Calendar by Johan Heine and Michael Tellinger. This colourful volume is distinguished by the claim that a cluster of stones near Kaapsehoop is an ancient ‘calendar’ and the ‘oldest man-made structure on earth’. It was dated for them by an amateur astronomer as ‘around 75 000 years old’, a finding that they reinforce with the supportive opinions of three mystics who visited the site. They further link ‘Adam’s Calendar’ with Great Zimbabwe because it is built along the same longitudinal line and they proffer the thought that the ‘site is an active portal for off- worldly beings to come and go’.

A slightly different path is followed by Richard Wade, who argues that the ‘ruin fields’ were built by a culture that predated Mapungubwe (thus pre AD 1200) and shared a reverence for the vast resources of the sky with both Mapungubwe and Great Zimbabwe. He argues that the sites are ancient observatories.

These interpretations have proliferated and diversified but most of them are based on speculation rather than credible evidence and share the key assumption that African society was incapable of innovation without decisive external influences. This idea often goes hand in hand with the belief that Africans did not build with stone and lived semi-nomadic lives practising slash and burn farming – which was antithetical to the enduring structures and settlements which blanketed the Mpumalanga escarpment. It is a belief that forms a recent addition to a much older and wider literature which has invoked outsiders, and even aliens, to explain the existence of dramatic sites in Africa, including Great Zimbabwe and the pyramids.

The attention of scholars was first drawn to this region by the remarkable and extensive rock engravings on the farm Boomplaats near Lydenburg which were described by Cornelis Pijper in 1918. But it was not until 1939 that EC van Hoepen, who was based at the National Museum in Bloemfontein, published the first comprehensive investigation into the stone-walled sites. He concluded that they were built by black Africans, probably the ancestors of Pedi and Ndzundza groups who lived in the region, and he did not entertain the suggestion that they might have been built by non-Africans. His interpretation followed on his examination of the stone walls and the complete range of material culture found at the sites. He mapped ruined homesteads, recorded engravings and removed several engraved rocks to the National Museum in Bloemfontein.

After 1948, as apartheid transformed the intellectual landscape, pre-colonial African farmer archaeology was all but abandoned. The next substantial research programme on these sites was only initiated in the early 1960s, by the archaeologist Revil Mason of the University of the Witwatersrand (Wits). A central aspect of his research consisted of plotting the distribution of stone- walled sites based on aerial photographs, and he identified 1 792 stone-walled sites in the region. This mapping provided the first glimpse into the regional distribution of the Mpumalanga stone-walled ruins.

Revil Mason’s insights were deepened by other archaeologists from Wits. Mike Evers, a lecturer in the department, made an intensive aerial photographic survey of the area between Lydenburg and Machadodorp while Dave Collett, then a Master's student who later did a DPhil at Cambridge University, looked more closely into the site-specific features. He concluded that the complex enclosures found at sites were cattle enclosures at the centres of homesteads, and that the simple stone ruins, which are randomly located in settlements, were used for small stock. The stone ridges, on the other hand, were marked by metal hoe sharpening or wear patterns on some of the rocks, indicating that they were terraces used for agricultural purposes.

These researchers all agreed that the sites could be attributed to Pedi society because in their view the settlement layout and ceramics indicated a close cultural affinity with modern Pedi patterns, and in the eighteenth and nineteenth centuries the powerful BaPedi kingdom controlled the Lydenburg area. The assumption that the sites were an expression of Pedi settlement and culture was far from surprising as historians had long given the kingdom pride of place in the history of the region. The rich oral traditions about the state, collected from the 1860s onwards, and the voluminous archival records generated by neighbouring Trekker society from the 1840s, had acted as magnets to researchers.

The main themes historians had pursued included the emergence of Pedi dominance in the eighteenth century, the early struggles around mission Christianity, and its central role in resistance to Boer and British attempts to control the Transvaal between 1840 and 1880. As is so often the case in historical narratives, the groups who ultimately were vanquished excited little interest. But fortunately – as we shall see – this neglect did not erase all traces of another society which had once dominated the escarpment.

Thus far this brief introduction has outlined the approaches that prevailed at the end of the twentieth century. In the last decade a new research thrust has gathered momentum. It provides the basis for this publication and for our resolution to the debates which have swirled around the sites. It builds on, rather than breaks with, some of the earlier accounts but is distinguished by its increasingly interdisciplinary nature. At long last historians and archaeologists – in this area at least – have started systematically to share sources and ideas, and have found their insights immeasurably enriched as a result. This collaboration has also provided an incentive to a much wider interaction and cooperation with geologists, soil scientists, botanists and geographers in Africa and in Europe.

What follows is intended to provide the reader with a taste of the fruits that we have harvested thus far. We shall give the best answer we can, based on evidence and not conjecture, as to who lived in these remarkable sites, what the nature of the world was that they created, how their history unfolded, and why, by the 1830s, the walls stood empty. 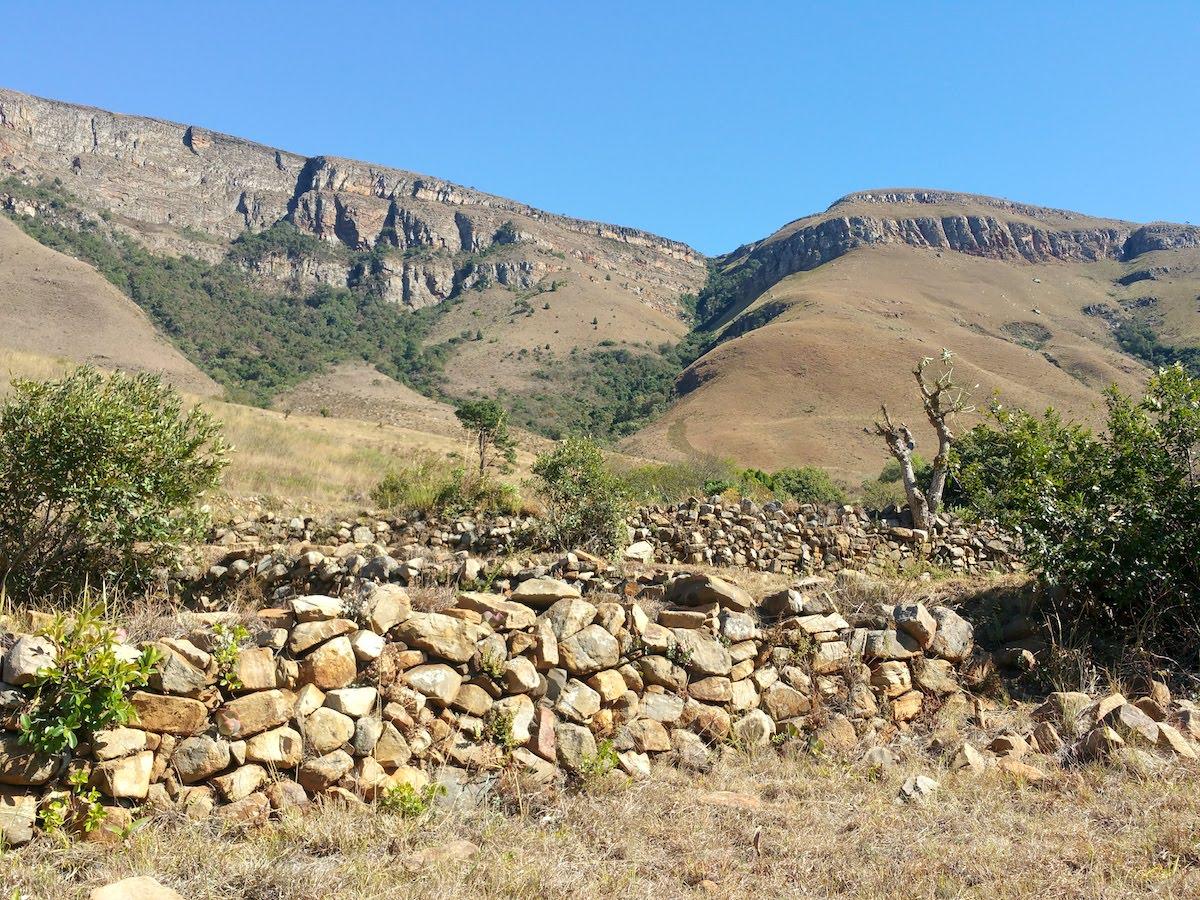 Another shot of Bokoni structures at Verlorenkloof Farm (The Heritage Portal)

You can get your copy at all good bookstores. To order directly email orders@blueweaver.co.za.