Six ways you can help the Hermanus Cemetery 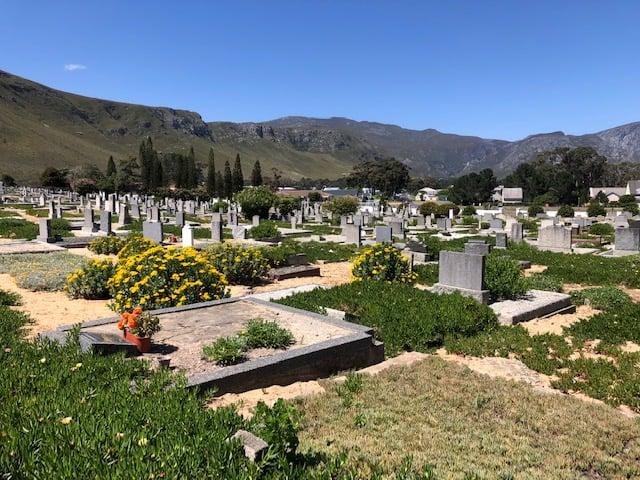 We have several words in English to refer to places where we bury our dead: burying ground, burial place, graveyard, churchyard and cemetery, for example. In the history of Hermanus, different terms have been used at different times.

It also appears that different places have been used as cemeteries at different times. The earliest two recorded were inside what we would now see as the central business district.

Alex Luyt, a second-generation resident of the town, identified these two sites in a talk he gave in the 1950s, as reported in an early issue of the Hermanus News. He stated that the 'European' cemetery was located in the late 19th century near St Peter's School and Church, probably including the present open area next to St Peter's Parish Hall and facing onto Marine Drive. The 'non-European' cemetery was located on the cliffs to the southwest of the Marine Hotel.

When the Hermanus Municipal Cemetery was created, cemeteries were assumed to be best if inconspicuous and located at some distance from the town's day-to-day life. It was believed that families would maintain and even beautify relatives' graves, and the local authority did not foresee any responsibilities beyond occasional cleaning up the general area. The beautification of the cemetery as a municipal asset was not thought of at all.

However, some changes have taken place in the late 20th and 21st centuries. The central business districts and residential areas of towns have grown and are now much closer to the cemeteries. In many cases, families have moved away from the town and no longer have the interest or capacity to maintain family graves.

Thirdly, residents and visitors have become interested in the history of individuals and families whose members are buried in the cemeteries and visits to cemeteries for purposes of memorialising or studying graves have increased.

These changes mean that the local government and individuals are becoming involved in the maintenance and even 'improvement' of cemeteries. In Hermanus, Melanie Moore started an initiative to 'beautify' the Municipal cemetery. After some initial hesitation, the Municipality has supported her enterprise, and in October 2021, the Hermanus History Society threw its weight behind the activity.

The History Society is interested in many notable people from Hermanus buried there or whose ashes are included in the wall of remembrance. Included are the mayor and freeman of the town Meester W H Paterson, P John Luyt, owner of the Marine and Riviera hotels, the Luyt's son Henry, David Esau Allen, owner of the Windsor hotel, and the novelist Stuart Cloete and his wife, Mildred.

In the recorded history of Hermanus, there are several descriptions of funerals in the present cemetery. In her memoirs, Joey van Rhyn Luyt describes the funeral of her husband in 1940:

On the day of the funeral, 20 January, all shops and businesses in Hermanus closed for the afternoon, and all flags hung at half-mast. Three lorries, piled high with wreaths, followed the hearse. The service was held at St Peter's Church, which was packed with people and the grounds crowded with those who could not get in. The funeral procession was so long that cars were still leaving the Church when the hearse had already reached the cemetery, and we had to wait while the people assembled.

The grave had been lined with artificial grass mats to hide the raw earth, but this was not good enough for George Henn. He had spent the morning stapling flowers onto the mats so that the grave was entirely filled with blossoms.

Melanie Moore welcomes help and involvement from interested individuals. She can be contacted at melanie.ronell.moore@gmail.com. These are some of her ideas:

1. Spread the word about the cemetery upgrading program and get your community involved
2. Everybody with family graves, please tend to them
3. Give your time –  it is just a big garden that needs weeding, cleaning, planting, watering etc.
4. Donate – compost, plants, trees etc.
5. Give financial help
6. Be creative: Start a historical walk through the cemetery. Mark the important graves. Write about the historical figures buried there. Draw a map of the walk and leave a pamphlet at the tourist office.