Underwater archaeologist, Dr Bruno Werz and divers Christopher Byrnes and Michael Barchard, investigated ‘some unusual deposits’, during a maritime excavation of the Dutch East India Company (VOC) shipwrecks, the Oosterland and the Waddinxveen in February 1995. This led to digging deeper into the Table Bay seabed. There, ten meters below the surface, they discovered ancient soil where these prehistoric stone tools, called handaxes had been held in place for hundreds of thousands of years. At the time, the discovery were the world’s oldest artefacts ever to be found underwater. 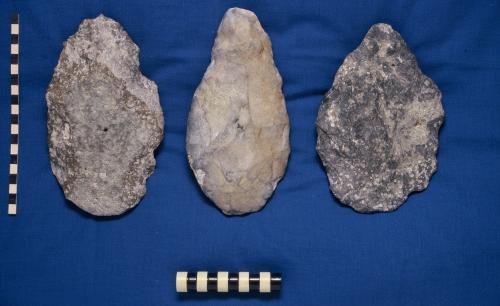 This stone tool technology was developed nearly 2 million years ago by hominins, the extinct species ancestral to humans. Made from Table Mountain sandstone, it is estimated that these local handaxes were made from 1.7 million to 300 000 years ago. As Dr Werz explains, these handaxes were created by hitting a suitable stone with a hammerstone; the resulting flake that broke off had a natural sharp edge for cutting and could be sharpened further by striking other smaller flakes from the edge. These handaxes would have been used as a multi-tool by those living along the shoreline to dig up roots and tubers, butcher carcasses, chop wood, and break open bones to access the nutritious marrow inside.

These artefacts provide evidence that hominins occupied ancient environments, or paleo-landscapes, that are currently covered by water due to rising sea levels and changing shorelines over time. They are also proof that artefacts left behind many thousands of years ago can survive repeated sea level changes, caused by shifts in global temperatures. The discovery in Table Bay changed the perceptions of prehistorians internationally and inspired further finds all over the world.

The artefacts will be presented to Iziko Museums of South Africa for preservation and care, and will form part of Iziko Archaeology’s vast collections; used in future research and exhibitions.

Digging Deep – uncovering underwater handaxes in Table Bay will be on show at the Iziko South African Museum, open daily from 09h30 to 15h30.