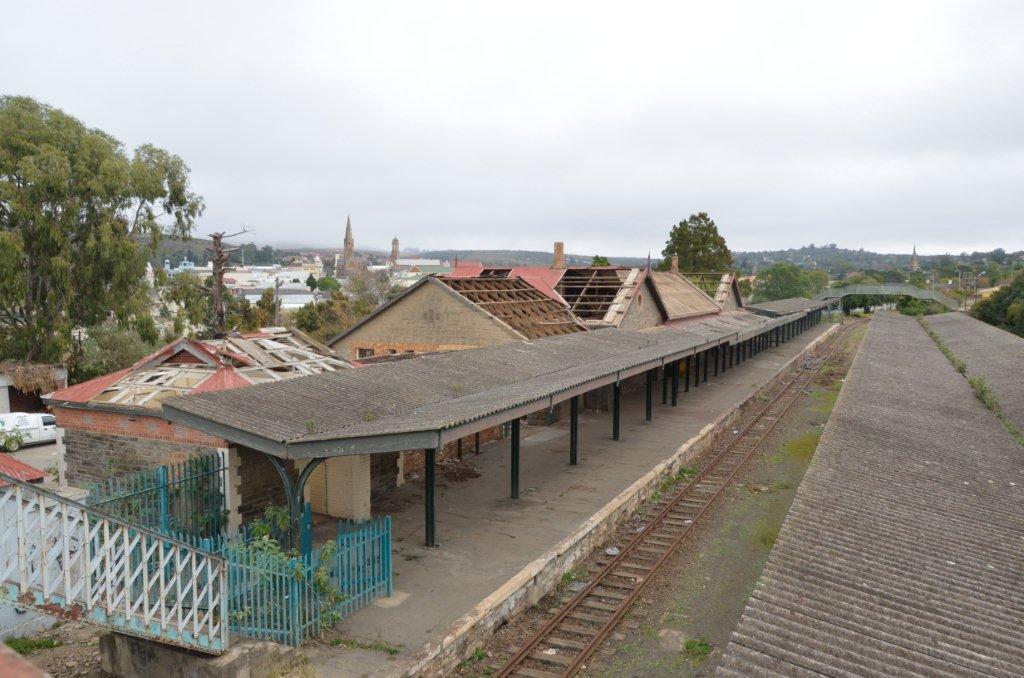 In 2014 the Grahamstown Residents Association (GRA) ran a powerful campaign to try and pressure Transnet to bring the Grahamstown Railway Station back to life. Over 3000 people signed a petition, local politicians threw their weight into the fight and the media rallied behind the cause. The campaign resulted in the the site being secured and stabilised. Residents, heritage enthusiasts and thousands of people with memories of the station hoped that this would be the first step towards adaptive reuse. Unfortunately very little has happened since then and the potential of the station remains unfulfilled.

The rail link between Grahamstown-Port Alfred and Grahamstown-Port Elizabeth was realised by the 1880s: The branch line from Alicedale to Grahamstown covered 56 km of difficult terrain. (Allen Jorgenson. The History of the Railways). . In May 1879 the Grahamstown Railway Station and platform was completed and recorded by James Butler in an historic sketch of the sandstone structure. The first train from Port Elizabeth was welcomed on 3 September 1879; the Kowie line opened in 1884. The branch line to Port Alfred was run by A private company, the Kowie Railway Company operated the Port Alfred line from 1895 – 1912 after which the Union Government took over control from 1913 after the Blaauwkrantz Train disaster in 1911 in which 29 passengers onboard died. From the 1930s, the South African Railways ran the train service.

The Grahamstown Railway Station is not only an historic building but has been the site of many personal memories for those arriving in Grahamstown to work or study or going on holiday to Port Alfred.  Railway history is also an important part of South Africa’s economic history– the freight that was transported by rail, the transition from steam to electric train and finally, the reduction in the usage of branch lines.  Soldiers leaving Grahamstown by train, going to fight in various local wars, the First World War and later World War II said their farewells on this historic platform.  Rhodes University Alumni and past pupils of the local schools arrived by train to start their careers and departed home from this educational centre. In 1986, Grahamstown celebrated a memorial centenary ride to Port Alfred, a joyous occasion celebrating the passenger service to and from the Kowie beach resort.  The railway station, platform and post-box were declared national monuments (Proclamation by National Monuments Council: 7 March 1989); presently the status of the Grahamstown Railway Station is a provincial heritage site.  (National Heritage Resources Act no 25 of 1999. 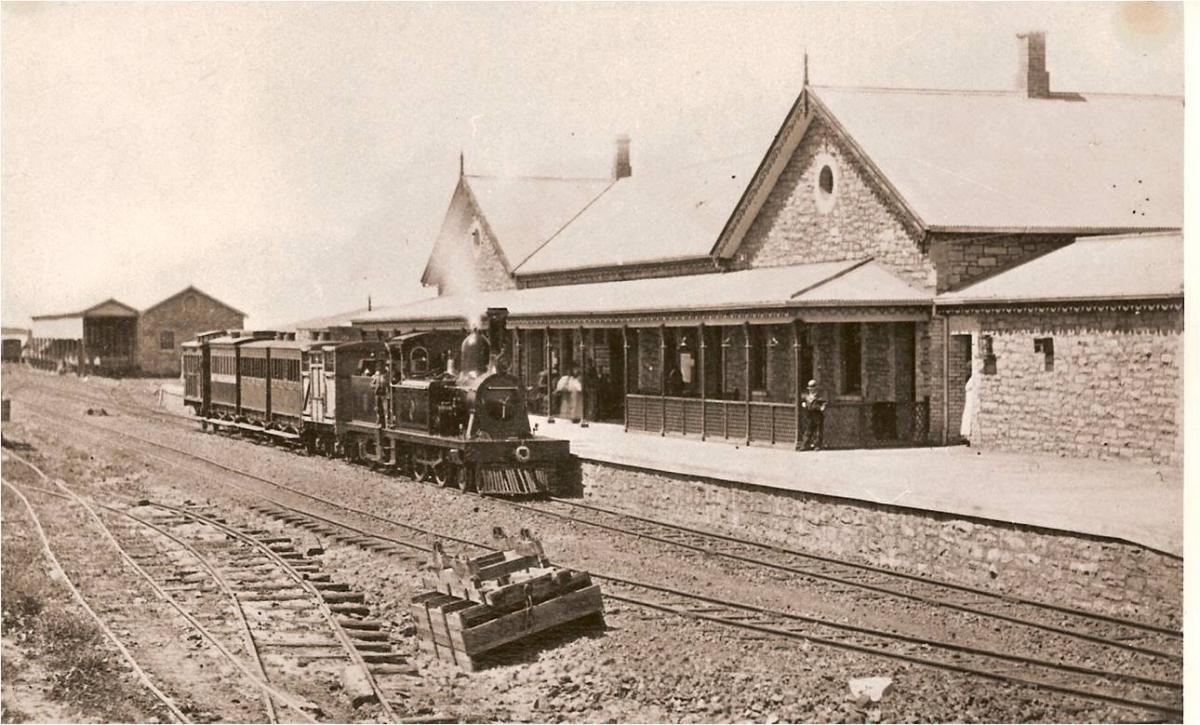 The passenger service gradually closed: the last train ride to Port Alfred was in 1986 and in 2009, the Alicedale line  closed, isolating sidings like Atherstone and New Years River and of course Alicedale residents. In 2000 PRASA and DSRAC representatives were present when SAHRA placed a plaque at the Station to emphasise economic and heritage importance of the railway. The proposed bus terminus in 2009 could have meant the revival of the Grahamstown Station which had adequate facilities at the time. In February 2013 Amee Tarr’s Rhodes Fine Arts exhibition on the 1911 Blaauwkrantz Train Disaster, used three rooms of the station. Transnet gave permission for the padlocks on the doors to be cut and the rooms were available for this one-night exhibition.  Members of the Tarr family died in that train accident.

This adjoining building was originally the Albany Brethren Society (founded in 1828) a benefit society or early insurance society founded in Grahamstown.  The building was also used as a bioscope until the Anglican Church bought it in the 1920s (F van der Riet. Grahamstown in Early Photographs). Since the 1950s, St Clements Coloured School, an Education Department practising school for Rhodes had classes here until in 1963, the pupils moved to Mary Waters Secondary School (named after Miss Mary Waters, an English teacher at St Clements School).  The building reverted to an Anglican Church but with the vandalism of the Railway Station, the toilets and electricity cables of the Church have had to be replaced. The distressed congregation have therefore supported the initiative to secure and reopen the station.

Click here to view the site on google maps. Please use this thread to add background and updates. Main image via Robbie Green 2013.