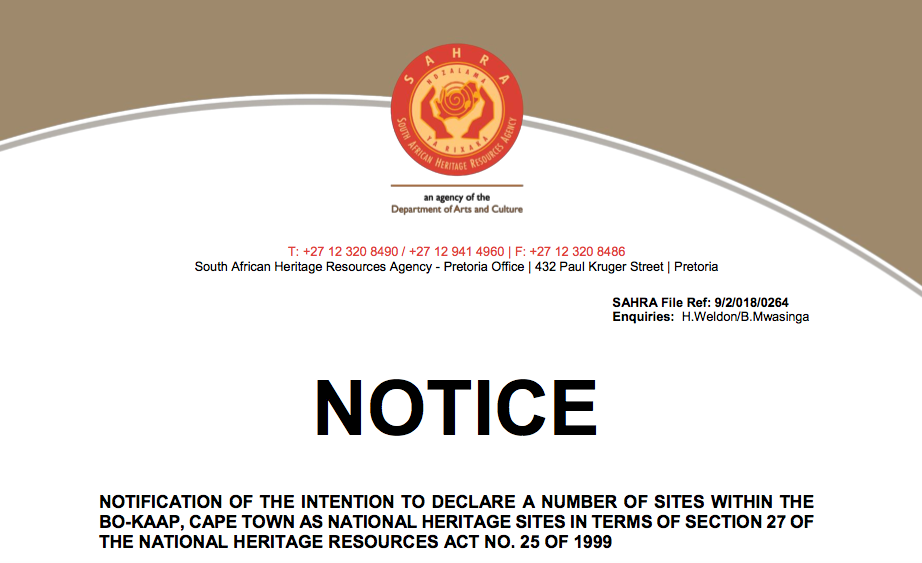 The South African Heritage Resources Agency is a statutory body that is mandated under the NATIONAL HERITAGE RESOURCES ACT NO. 25 OF 1999 to protect heritage resources at a national level. Part of this mandate is to identify places with qualities so exceptional that they are of national significance and investigate the possibility of declaring the place a national Heritage site. SAHRA has identified the following sites as having qualities so exceptional that they are of special national significance and warrant the declaration as National Heritage Sites.

Bo-Kaap is Cape Town’s (and most likely South Africa’s) oldest surviving residential area, established in 1767. The earlier residents ranged from European Immigrants to “freed blacks” (comprising mainly of freed slaves imported from Batavia). After the abolishment of slavery in the Cape in 1830s, there was an influx of freed Muslim slaves. Through the generations of these families residing the area, the community spirit of Bo-Kaap has been carried through the last two centuries, with the protection of religious, cultural and architectural heritage at the fore.

Architecturally the Bo-Kaap has the largest concentration of pre-1850 architecture on South Africa and comprises a range of architectural styles such as Cape Dutch, Georgian, Victorian and Edwardian. The streetscape character is further enhanced by the siting of the area on the slopes of Signal Hill.

Spiritual and Social values of the Bo-Kaap lie in its integral part of the historical contribution to the establishment of Islam in the Cape and southern Africa with some of the most respected founders of the Muslim Community buried at the Tana Baru Kramats.

What does the declaration mean?

Declaration is the most permanent form of formal protection on a site. It is also an acknowledgement of the importance the site has in terms of the history of South Africa and has contributed significantly to the development of our nation as we are today. The site is protected to ensure the sustainably of the site and that the significance identified in the site is maintained.

SAHRA is responsible for the protection of all National Heritage Sites and will, therefore, be the responsible heritage resources authority to ensure the protection of the sites according to section 27 (15) of the NHRA. In terms of Section 27 (18), no person may destroy, damage, deface, excavate, alter, remove from its original position, subdivide or change the planning status of any heritage site declared a National Heritage Site without a permit from SAHRA, and, in terms of section 27 (22) of the NHRA, no person may damage any fence, wall or gate constructed or sign erected by SAHRA in terms of subsection (21).

You are hereby given 60 (sixty) calendar days from delivery hereof to make representations or written submissions regarding the proposed declaration and to propose, if any, conditions under which the declaration will be acceptable to you, in accordance to Section 27 (8) (b) or (c) of the NHRA.

Alternatively you may submit via email to the following email addresses: bmwasinga@sahra.org.za or hweldon@sahra.org.za

Alternatively, you may make representation at the public meeting on 16th March 2019 at 09h00 at the Castle of Good Hope where the proposed declarations will be discussed