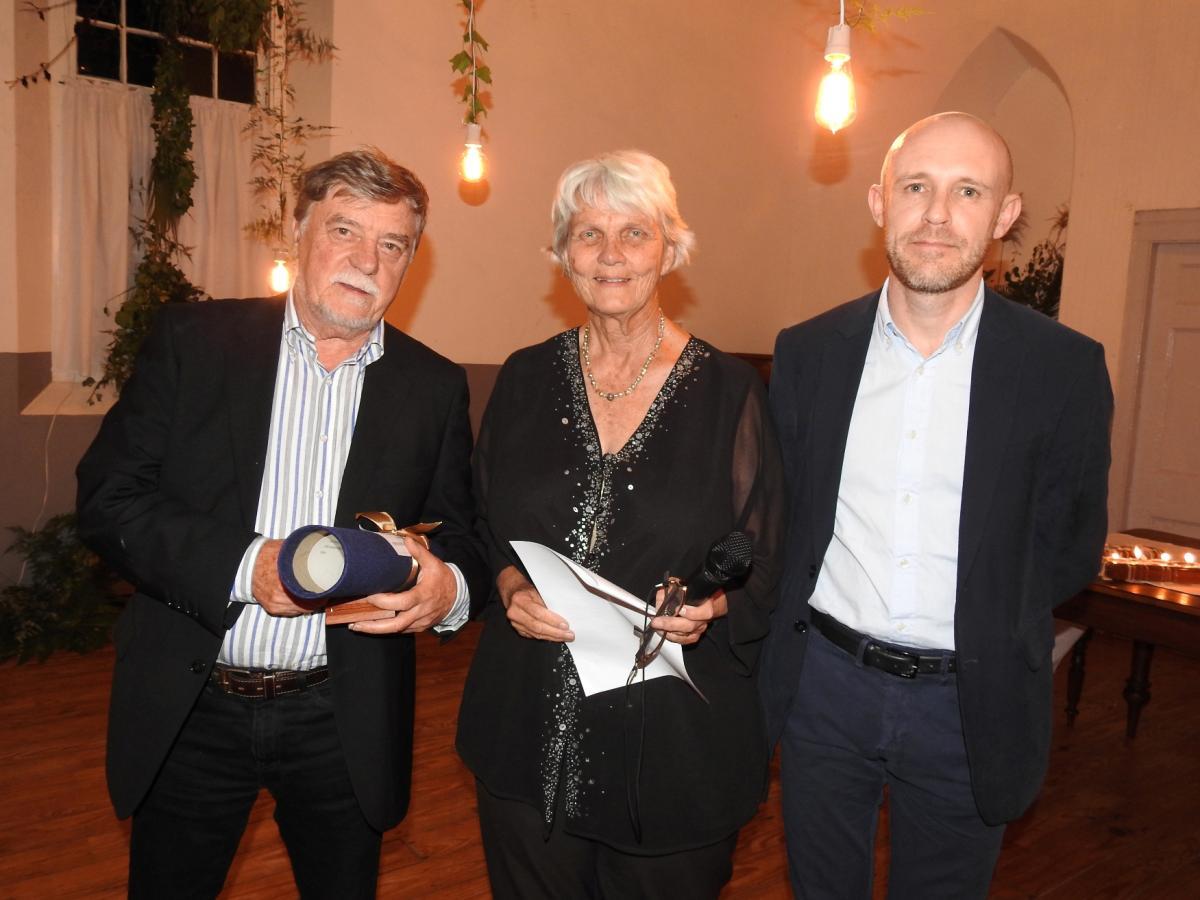 Efforts to save the historic cultural landscape of the Bo-Kaap, a champion of community empowerment through heritage and a committed volunteer at a local museum. These are the efforts that were recognised at the 2019 Simon van der Stel awards dinner held in Tulbagh last weekend in culmination of the Heritage Association of South Africa (HASA)’s annual symposium.

The awards are the country’s premier heritage awards for conservation work and have been in existence since 1969. The gold medal award is given to an individual while the gold certificate is awarded to a group or organisation. The awards recognise outstanding conservation efforts across South Africa as judged by a distinguished panel of heritage and conservation professionals. The awards are shortlisted from nominations received from HASA associates and the general public.

A gold medal was awarded to Professor John Parkington. Prof. Parkington is a remarkable scholar whose archaeological career in South Africa has spanned over 50 years. His work has primarily focused on understanding the long-term hunter-gatherer settlement in the Fynbos Biome of the Western Cape. It involves mapping, sampling, and excavation of sites across the landscape, and analysis of artefacts and ecofacts with the primary goal of understanding relationships between hunter-gatherers and this landscape around them through time. This is achieved by reconstructing life histories and social relations, settlement choices, understanding rock art and resource use over the last 150 000 years.

His work has significantly contributed towards the preservation of rock art sites in the Cederberg area and the greater Western Cape region. His efforts and research have not only focused on academic inputs but on community empowerment. In particular, this has been achieved through the Clanwilliam Living Landscape Project through which he has initiated a number of rock art conservation and guide training programmes and job creation opportunities around heritage to help uplift the community. His work in training rock art guides and heritage conservators has not only uplifted the community but it has in effect made heritage accessible to those communities most separated from it through historical inequality. The Clanwilliam Living Landscape Project, through the training of guides and their interaction with tourists, highlights important indigenous histories that are often muted in contemporary society. The Living Landscape Project was initiated in the mid-1990s driven by the move in the 1990s to communicate knowledge back into the communities from which it came from. One of the aims of the project was to raise awareness of the rich archaeological history of the region in schools. Prof. Parkington has spent over 24 years teaching children around Clanwilliam to understand how people lived in the Cederberg region thousands of years ago. His contribution to teaching and education through his deep understanding and through creative displays at the Living Landscape Project, speaks to his tireless efforts in preserving long-term social and environmental history and in making it accessible to a wider audience. The important synergy between the Living Landscape Project and his academic research resulted in raising the visibility of hunter-gatherer Stone Age archaeology in the deep past as well as in establishing links between this past and the descendant Khoesan communities in the present.

The projects he has initiated strive to put heritage conservation into the hands of the community as co-trustees and custodians in its heritage management process. Through the Living landscape Project, his contributions have focused on making explicit the links between heritage and the Clanwilliam landscape, such as its fossils, artefacts, natural features, and ruined structures, and the passage of time. In addition, he has worked on preserving the folklore linked to Khoesan identity through collaborations with Jose De Prader-Samper and the Wild foods project. These projects have acted as catalysts to ensure the preservation of historical memory which might otherwise soon be forgotten. His work in the community in Clanwilliam and the Cederberg is unparalleled.

Prof. Parkington has worked tirelessly and selflessly in the cause of heritage. He has been instrumental in motivating for many rock art and archaeological sites to be included as UNESCO world heritage sites. His efforts and research have not only focused on academic inputs but on community empowerment through his Clanwilliam Living Landscape Project initiative. In addition to preserving the long-term social and environmental history, he has also made it accessible to a wider audience through several very readable books which make sometimes esoteric academic facts understandable and fascinating.

In short, the Gold Medal is awarded in recognition of his significant contribution to the conservation of the National Estate; furthering of knowledge in the field of heritage studies, and the creation of public awareness of South African indigenous, intangible, archaeological and paleontological history – in verbal and written form. 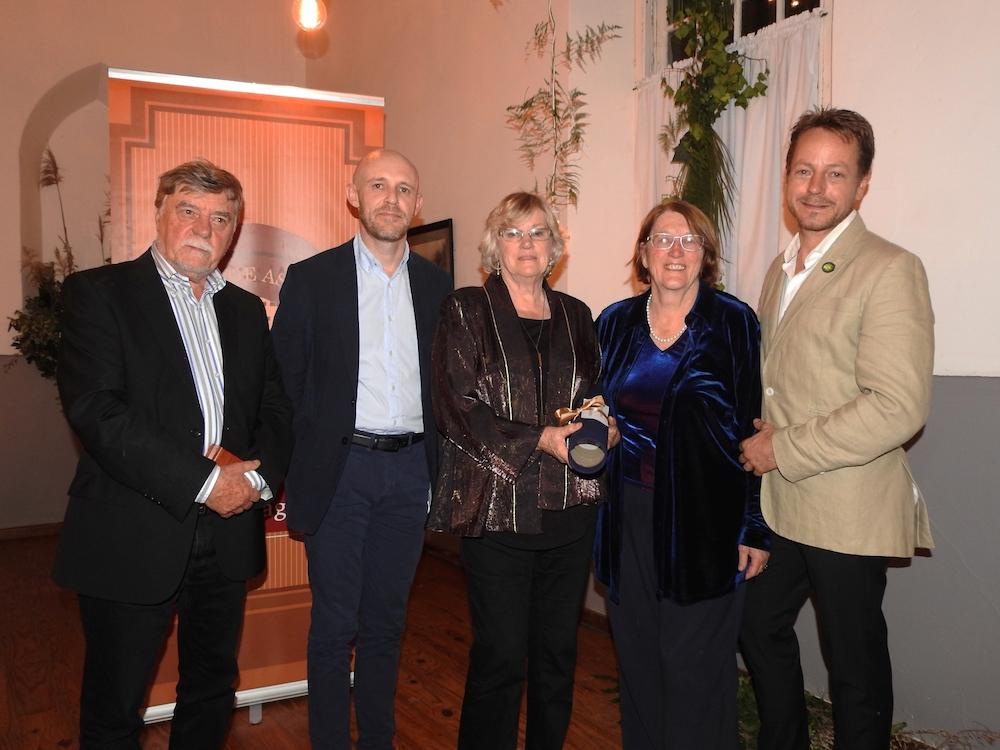 A gold certificate was awarded to the Bo-Kaap Civic and Ratepayers Association. The Association has been at the forefront of efforts to protect the heritage, living heritage, culture and traditions of the Bo-Kaap in central Cape Town. This they do within the context of growing gentrification. The group works in the belief that residents have the right to have a say in developments affecting the area. Towards this end the group spearheads the “Bridges not Barriers” campaign to resist inappropriate and insensitive development. The Association also contributes to a wider dialogue around the kind of city residents want to live in.

Among others, the Association exerted pressure that contributed towards the finalisation of a Bo-Kaap Heritage Protection Overlay Zone. It has also secured commitments from national government to have 19 national heritage sites declared. In April this year, these sites were formally gazetted by the South African Heritage Resources Agency.

The members of the organisation are all volunteers and have given countless hours to public campaigns to protect the unique heritage, culture and traditions that is the Bo-Kaap. Furthermore, the organisation does not hesitate to turn to the courts when necessary.

The adjudication committee recognises the organisation’s considerable contribution to the creation of public awareness of South African heritage and the conservation of the National Estate and awards them a gold certificate.

A Simon van der Stel certificate of merit was also awarded to Jomien Havenga. Ms. Havenga is a former employee of the Drostdy Museum in Swellendam and is one of only a handful of textile conservators left in the country. After 16 years at the museum she had to retire in 2010. However, since formal retirement she has continued to volunteer at the institution where she serves as the conservation manager of a collection spanning 65 000 items.

Ms. Havenga has long been a champion of the Drostdy Museum, actively encouraging children to visit the Museum. Her “Ambassadors of the Drostdy” programme has enabled learners to become Museum Guides. The award is made in recognition of her continued voluntary involvement with the Museum, her contribution to the furthering of knowledge in the field of heritage studies and the creation of public awareness of local heritage.

Jacques Stoltz, HASA chairperson, congratulated the recipients and called for greater awareness of the excellent work being undertaken by these activists.