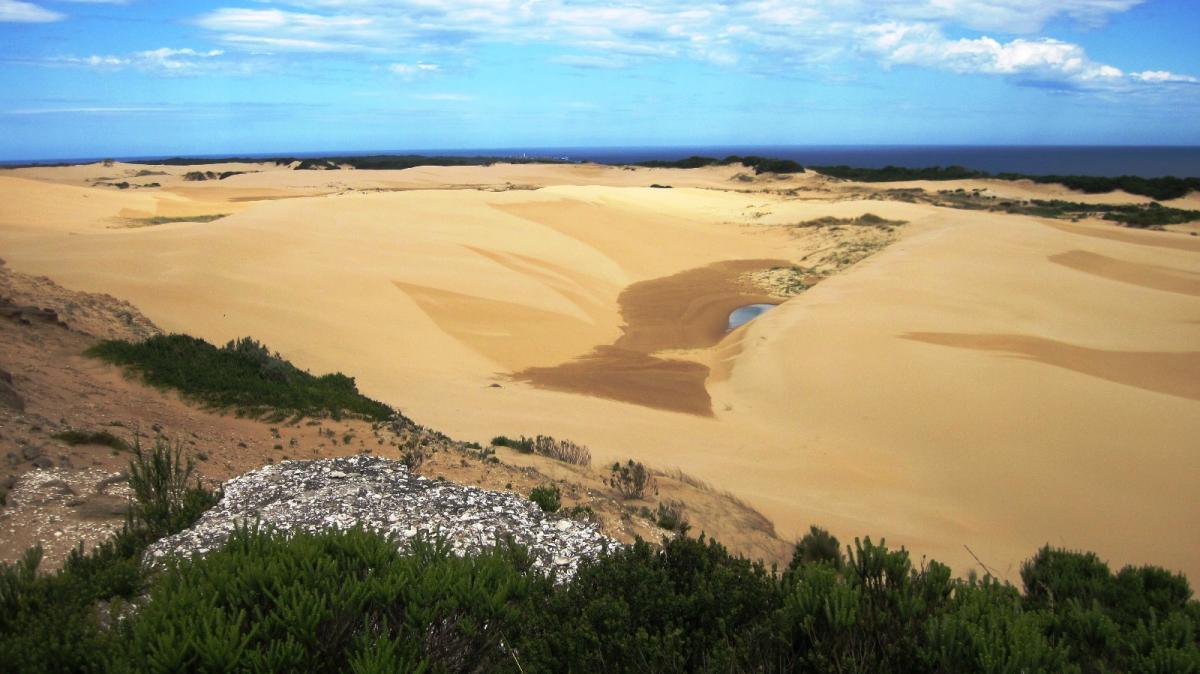 The Thyspunt site is situated in the Eastern Cape between the towns of Humansdorp (North), St. Francis Bay (East) and Oyster Bay(West). The site can be accessed from the N2 National road at Humansdorp and then via a gravel road to Oyster Bay.

Thyspunt is coastal site known for its unique natural and heritage qualities. It has been earmarked by Eskom for the development of a Nuclear Power Station (NPS). The final EIA has been submitted to the DEA for decision making. The Environmental Assessment Practitioner (EAP) ignored most of the community objections to the project and maintains that the site is viable for a huge industrial development of this nature. This is despite the fact that the South African Heritage Authority (SAHRA) gave the project a no-go recommendation based on the fact that it constitutes a cultural landscape of national and international importance in terms of the UNESCO de⁥finition.

The local Khoisan community is opposed to the project due to the fact that their cultural heritage will be destroyed as a result of this development and because the type of archaeological and palaeontological resources that are present at Thyspunt are not only of spiritual signi⁥ficance but also the last remaining example of its kind anywhere in South Africa. The following statement of signi⁥ficance appears in the Heritage Impact Assessment:

(a) The study area is highly signi⁥ficant in terms of Late Stone Age pre-colonial archaeology, in particular the large quantity and variety and size of shell middens. Many of the middens are very well preserved (among the best ever seen by the author) and are in themselves archives of information about the identity and behaviour of pre-colonial people, as well as the environment in which they lived.

(b) While shell middens are relatively common, undisturbed middens are becoming increasingly rare. The large number of well preserved middens is considered to be signi⁥ficant.

(c) The Late Stone Age heritage of the area is directly linked to the heritage of South Africans who are alive today. Particularly relevant is the fact that a high proportion of the middens are less than 2,000 years old, are pottery rich and associated with a time when Khoekhoen herders were the dominant force in the area. Concern has been expressed by a local “⁥first nation” community (the Gamtkwa) with respect to the future of archaeological material, which is regarded to be the heritage of the Khoisan people and their descendants. All pre-colonial material is automatically protected by section 35 of the NHRA.

(d) The Middle Stone Age and Early Stone Age material identi⁥fied on the fossil dunes is potentially important in scienti⁥fic terms, especially if it is preserved in an in-situ context on palaeosols deep under shifting dunes in association with fossil bone. The potential exists for incredibly rare human remains of early humans to exist in associated contexts.

(e) While not of any architectural merit, the St. Andrews Shack is associated with living heritage and tradition. It has signi⁥ficance in terms of the concept of living heritage as de⁥fined by the NHRA.

(f) The abandoned farm cottage at Welgelegen (Pennysands), which lies within an area demarked for the construction of a high voltage yard, is of moderate heritage signi⁥ficance due to its poor condition and low architectural merit. It does not contain any unique elements.

The ⁥final EIA has been submitted for a decision. This decision is expected within the next month or two (late 2016). Eskom has also submitted an application for Nuclear Installation Site Licence for the Thyspunt site to the National Nuclear Regulator.  If Eskom receives environmental authorisation they will endeavour to start with construction within the next 2 years and this will destroy a site of international signi⁥ficance forever.