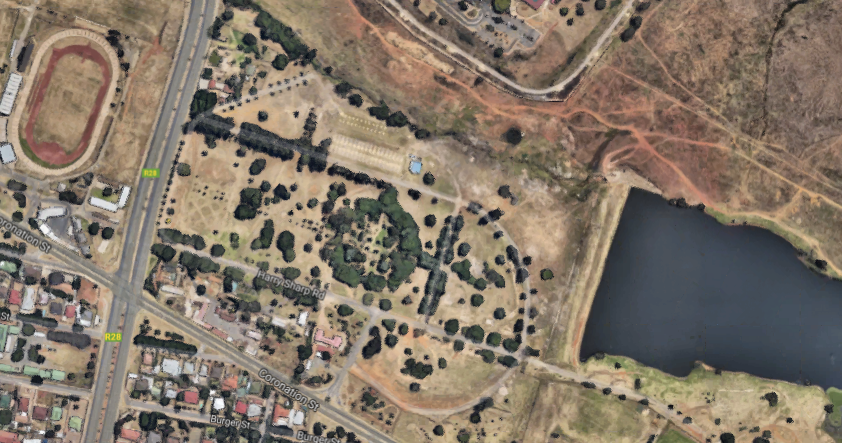 Coronation Park was established in 1902 after the South African War (1899-1902) by prominent English speaking citizens of Krugersdorp in commemoration of the coronation of Edward VIII as the new British King. The Municipality of Krugersdorp took over the management and development of the park in 1903 and henceforth referred to it as “Coronation Park”. The original layout of the park provided for a labyrinth similar to the popular maze at Hampton Court in England and it was well known for its rectangular flowerbeds with numerous beds and spacious rose borders, palms and standard golden privets and also a shrubbery, planted with a very fine collection of trees and shrubs of rare quality. The municipal horticulturist, Mr. Harry Sharp, developed the park over a period of 44 years. He retired as Chief Horticulturist in 1950.

The performances of the Krugersdorp Town Band on Sundays in the park (1909-1924) were very popular. The bandstand in the centre of the park is evident of the days gone by. The band consisted of thirty voluntary members, mainly ex-British soldiers, under the leadership of Mr. W.J. Ward, and later Mr. E. McEnvoy. The municipality subsidised the band with the purchase of instruments and uniforms on condition that they held at least one public performance in the park per month.

Play equipment for children was for the first time provided in the park in 1911.The traffic training centre for children was developed in 1959. A swimming pool was added to the park in 1932 while the Centenary Dam on the eastern side of the park was developed in the 1980’s to expand the recreational use of the existing dam in commemoration of the centenary of the town in 1987. Coronation Park is also known for its “Town Farm” where a number of farm animals are housed.

The Park is historically known as a place for recreation and relaxation where residents meet over weekends. The social footprint in the sociocultural development of the town is rated high. The possibility exists that the Park was laid out on the site of the Women and Children Concentration Camp related to the South African War. The exact site of the Concentration Camp is not known, but the same landscape is shown on a historical photograph of the Camp. Furthermore, the Paardekraal Hospital (today the Yousuf Dadoo Hospital) was built on the hill above the site of the Concentration Camp. The Coronation Park lies directly below the Hospital.

The Park is in a neglected state. Nothing of the original flower beds, rose garden, etc. exists today. The park is under threat as the municipality intends to develop an upmarket conference centre at the site.