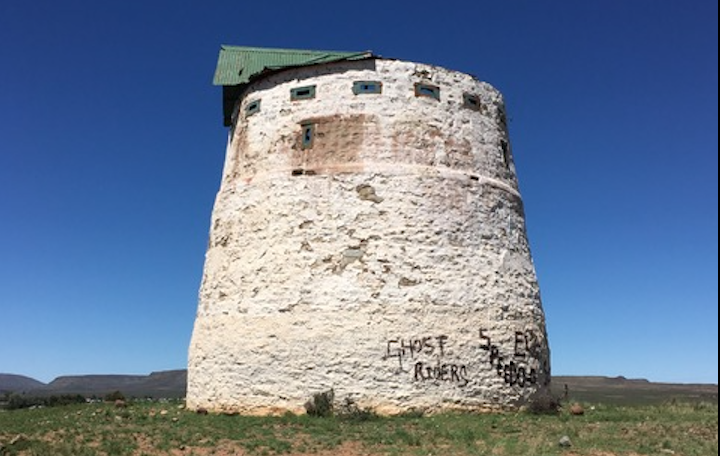 Local activists have reported that the Noupoort Blockhouse is in serious danger (click here to view location on google maps). With the roof gone, the structure is open to the elements and will continue to deteriorate rapidly. 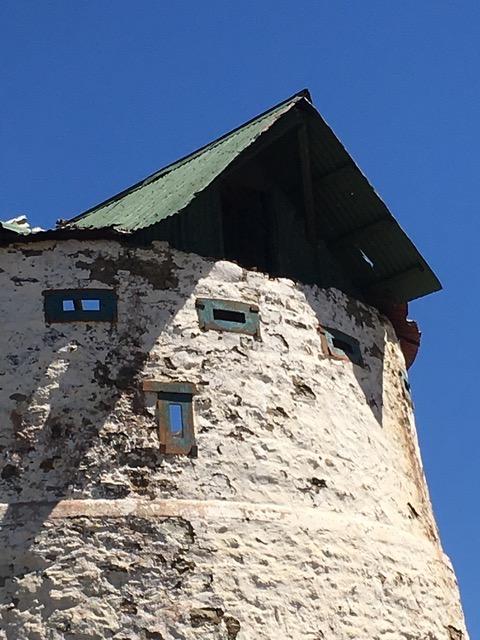 The roof in February 2018 (Nigel Utting)

The blockhouse at Noupoort is the most idiosyncratic and impractical building of its type in South Africa. Circular in plan, with an external diameter of 8,5 m at the base, tapering to about 7 m at the top, the whitewashed stone tower is approximately 7 m high and most resembles a tower windmill such as Mostert's Mill in Cape Town. The building is featureless up to a height of 4,9 m above ground level, at which point the wall sets back 100 mm and above which there are three 225 x 75 mm cast iron air vents. Around the middle of this top stage are five steel loopholes set vertically, and near the wall top, there are a further fifteen loopholes set horizontally. The loophole plates are unusual in that they are mounted on the outside wall face and not in the middle of the wall layer as is customary, and the apertures are much larger than usual. The tower is covered by an umbrella-shaped corrugated roof, which oversails the walls slightly, and has a gabled extension facing south-east which accommodates the entrance door in a vertical, corrugated wall. The internal arrangements of this blockhouse are not known as, with the entrance being more than seven metres above ground level, access is difficult. The top floor would appear to be positioned just above the air vents, so that the defenders would kneel to fire through the vertical loopholes and stand to fire through the horizontal ones. The storage area below may be divided into two by a second floor, or it could be one deep storey.

One problem associated with this structure is that the seven-metre long ladder would be very difficult to draw inside in the event of an attack and would project out of the doorway. It is therefore more likely that it would have been left in position, particularly if the blockhouse were surrounded and defended by a large garrison. In the absence of any windows in the lower storey(s), there would have been no light or ventilation there. The absence of machicouli galleries at the top would have made it impossible to protect the base against an attacking force, again suggesting that it was located in a garrison area. The author does not believe that this structure would have been built specifically as a blockhouse and considers it far more likely that it was converted from an existing windmill. 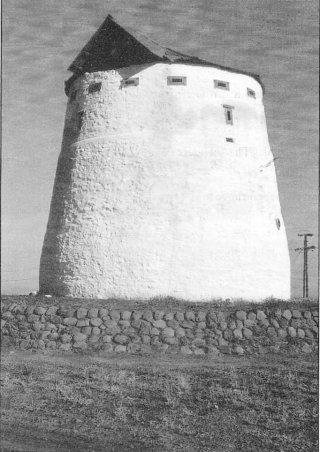 Older shot of the blockhouse

Please use this thread to add background and updates. Thank you to Nigel Utting for highlighting the neglect of the structure and for submitting the photos above and below.