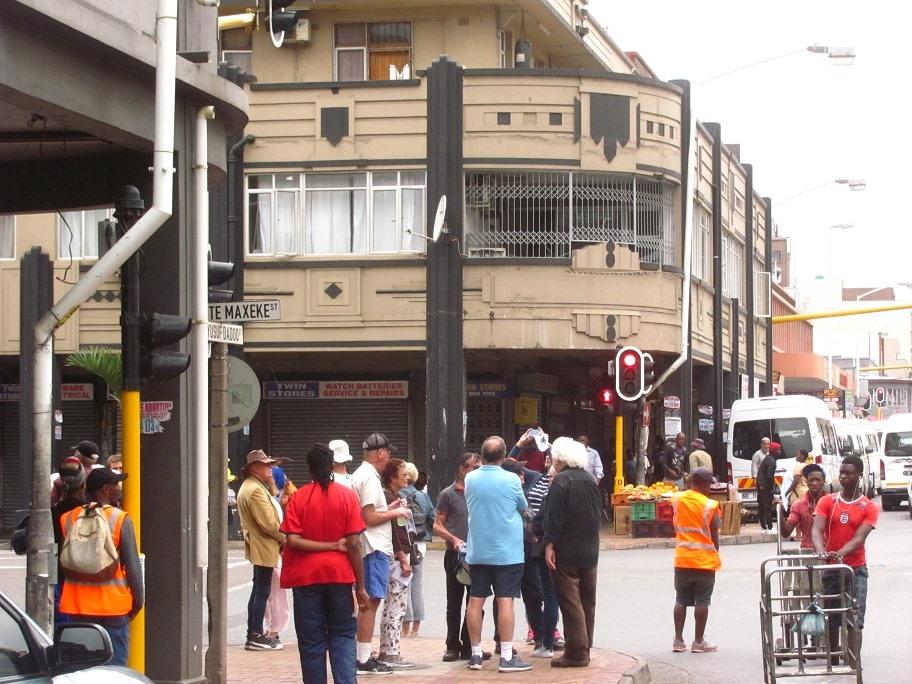 On Sunday 13 October, 2019, the Durban Art Deco Society hosted a Talk & Walk featuring Art Deco styled buildings in the vicinity of Dr Yusuf Dadoo Street (previously Grey Street) in Durban. This area, to the West of the city centre, was developed by Indian traders and businessmen in the first half of the 20th century. Some of these would have been descendants of the original 1860 settlers, brought as indentured labourers for the sugar industry. Others would originate from the subsequent immigrations of more skilled businessmen. What is notable is the apparent adoption of the Art Deco styles which were popular in the “white” city areas in the 1930’s and 40’s.

But wait, as Prof Franco Frescura explained in his talk. These styles had already become popular in Indian cities such as Bombay – were they not referring to their home country? Or perhaps they were independently rejecting the staid classical styles, and embracing the pacey modern age of fast cars, streamlined ocean liners and all that jazz. Unlike the large Art Deco apartment buildings in the “white” city, in this “Indian” part of town Art Deco was almost exclusively employed in two-storey buildings with shops and businesses on the ground floor, and living apartments above. Usually the upper floor projected over the pavement, protecting passers-by from the sub-tropical heat and rain. Decorations and motifs sometimes reflected local influences, such as nautical portholes, and sometimes Eastern influences, such as finial urns.

About 25 Society members and friends gathered at a very fitting base for the event – the “1860 Settlers Heritage Centre” in Derby Street. There they were able to peruse the various displays before Prof Frescura presented a thought-provoking illustrated talk entitled “Casbah Chic”. Having been involved in an extensive architectural survey of the area, and with an extensive knowledge of its history, he was able to explain how the “Western Vlei” came to be developed, the type of people settled there, the impact, and sometimes lack of impact, of apartheid, and the relationship to the rest of the city.

After the presentation, those attending proceeded on a 3km walk through the area, taking in a number of buildings with Art Deco styling, with explanations by Prof Frescura. En route, a visit was made to the Mahatma Gandhi Memorial Museum garden at 95 Dr Goonam Street. This site was originally purchased by Gandhi during his period in Durban.